The Breadbasket of America: New England? 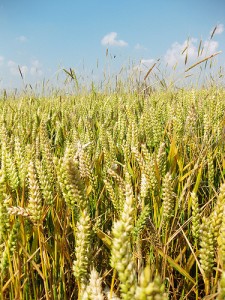 On a recent Friday morning, Wheatberry Bakery in Amherst, Massachusetts, was humming with activity. Behind hand-built wooden counters set with delicate French tiles, co-owner Adrie Lester dealt a brisk business in organic scones and muffins, loaves of fragrant artisanal bread, soups, and sandwiches. In the bakery’s kitchen, her husband, Ben, kneaded a batch of dough, then paused to slip a tray of sourdough baguettes into the oven.

The Lesters opened their business in 2005 and quickly established themselves as a neighborhood fixture. But in early 2008, everything changed. Commodity crop prices went haywire, sending the cost of flour soaring. “It was catastrophic,” Ben said. The Lesters decided that basing their products on an ingredient produced thousands of miles away in the Midwest no longer made good business sense, and they began to ask what it would take to source grain from local growers.

Two years later, an estimated 10 percent of the grains they use are locally grown, a number they hope to increase over time. In the meantime, the Lesters have poured their energies into a related endeavor: organizing the region’s first grain CSA, which in 2009 had approximately 115 members, with a waiting list to match. Last October, Ben and Adrie installed an electric mill in their bakery; now, a day rarely passes without a member stopping by to say hello and grind some grain into flour. The Lesters offer a remarkable example of the creative, community-focused thinking that has driven the local foods movement for the past decade, and they are not alone. From Maine and Vermont to New York and Pennsylvania, a growing number of farmers, bakers, brewers, distillers, and food educators are working to create a regional grain network throughout the Northeast.

Of course, there are the old-timers, like Daisy Flour in southeastern Pennsylvania, which has milled local wheat continuously since the late 19th century, and the relative old-timers—like Vermont’s Butterworks Farm and Gleason Grains, which have been growing grain for human consumption (as opposed to livestock feed) since the 1980s. Then there is the “new” generation. In 2006, veteran baker Don Lewis, of Wild Hive Farm in Clinton Corners, New York, began exclusively sourcing local grains for his breads and rugelach. Rochester’s Small World Bakery launched a bread club in 2007 that provides members with a weekly loaf baked from New York flour. And Cayuga Pure Organics, a 600-acre grain and beans farm, was founded in 2003 by two long-time Ithaca farmers, Erick Smith and Dan Lathwell.

Once upon a time, of course, local grain was de rigueur. Before America’s amber waves settled in the Great Plains (Kansas and North Dakota produce most of the country’s bread wheat, each harvesting over eight million acres annually), the East was America’s original breadbasket. This early production was, by default, hyper-local—grown by individuals and ground at home, or in small communal gristmills.

In 1825, the Erie Canal opened up trade routes that enabled New York’s fertile Genesee Valley to emerge as a leading wheat producer. The canal also helped establish cities like Rochester and Buffalo as early centers of industrial milling. According to the late Blake McKelvey, a former Rochester city historian, Rochester boasted 21 active flourmills by 1835, enough to earn it the title Flour City.

A few vestiges remain, like Birkett Mills, which has ground buckwheat in Penn Yan, New York, since 1797. “I guess nobody told them that flour milling was moving out west,” joked Luke Stoldola of Small World Bakery. For the most part, however, the mills have long since closed or been converted for other uses.

Today’s grain advocates hope to restore the vibrant regional grain economy in the Northeast, and—with people like the Lesters on board—they have reason to be hopeful. Still, there are potential stumbling blocks ahead. The movement is relatively new, and despite organizing efforts (like the Northern Grain Growers Association in Vermont and the Northeast Organic Wheat Project), it is still largely fragmented. Lack of infrastructure—mills and processing facilities—is another limiting factor.

Then there are the seeds. Several of the Northeastern wheat growers have begun to experiment with heritage or “landrace” varieties. Cayuga Pure Organics, for example, grows the ancient wheat ancestors emmer and freekeh (roasted green spelt) along with more familiar grains. These heritage varieties are heralded among the converted for their genetic diversity, adaptability, and complex flavor. “Modern wheat tastes like cardboard in comparison,” said Eli Rogosa, a baker, farmer, and heritage wheat advocate who is regarded as the unofficial high priestess of the movement.

Nonetheless, heritage wheats can pose challenges in the kitchen—particularly varieties that contain less gluten, which helps form chewy, fully raised loaves. “Some people say you just have to revise your expectations from the Midwestern flour standard,” said Erik Andrus, who founded Good Companion Bakery in Vermont. “But as a baker, I’m not ready for that.”

Additionally, many heritage varieties are currently available only in tiny quantities. Grains were commoditized over 100 years ago and never favored by backyard gardeners, said Elizabeth Dyck, who coordinates the Northeast Organic Wheat Project under the umbrella of the Northeast Organic Farming Association of New York. As a result, many varieties exist only in gene banks or on small experimental plots.

Growing out the seed populations is possible but will take time, organization, and funding. In the meantime, consumers and businesses are left waiting. Take King Arthur Flour, the beloved Vermont-based flour company with significant nationwide distribution. King Arthur’s bakery director, Jeffrey Hamelman, said the company is 100 percent behind using local wheat, and last year the company started baking a “Vermont Grains” loaf at its on-site bakery. For now, however, the flour sold under its label still hails, by necessity, from the Midwest.

Grain was a latecomer to the “eat local” movement but has proven a compelling addition. Whether or not it moves into the mainstream relies on how well the key players can work together. This January, the Northeast Organic Wheat Project and the Greenmarket co-hosted a “local grains tasting” in New York City. Farmers and millers from across the Northeast met with some of the city’s best chefs, bakers, and distillers to sample heritage wheats and discuss their common goals and challenges.

According to Dyck, these continued dialogues are critical to realizing the vision of a vibrant Northeastern grain economy. “People are good at figuring out how to get from A to B, but without more conversations, it will remain a very niche thing,” she said. “Still, do I think we can produce a substantial amount of grain in the Northeast with the right support? Absolutely.”