A Fertile Spring on the Itty Bitty Farm in the City 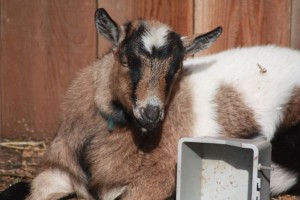 Big news, folks, big news! We’re pregnant! With a goat! It is our extreme pleasure to announce that one of our Nigerian Dwarfs, Lucy, is due sometime around the end of August. We can’t decide which prospect is more seductive, the fresh goat’s milk or the scampering hooves of teeny, tiny goat babies, who will be no bigger than a bread box at birth.

Spring is the time of year when livestock are usually giving birth rather than getting preggers, but Nigerian Dwarfs have the uncanny ability to breed year round making them stellar continuous milk producers, as one goat can be freshened while another is drying up. For those non-farmers out there, “freshening” is the polite way of saying lactating and goats, like all mammals, must give birth in order to lactate.

The Nigerian Dwarf breed, standing a mere 20 inches high on average, is ideally suited to small space, urban backyard food production. An individual Nigerian Dwarf requires 130 square feet of roaming area, and rather than needing a barn on the property, we can get away with one of those Dogloos. Most backyards in our San Francisco neighborhood could easily accommodate a couple of dwarf goats with plenty of room to spare for some chickens, a decent sized garden, and play space for the kids as well as adults. We are living proof that you can have all this and maybe more in a city home.

Though our Lucy weighs in at a hulking 65 pounds, most Nigerian Dwarf does top out around 50. Funny how no one bats an eyelash at owning a 120 pound Great Dane in the city, but when it comes to having a farm animal no larger than a Border Collie in urban environs, folks can really get their dander up, citing nuisances associated with livestock like smell and noise. First of all, I can guarantee that my goats’ manure smells a heck of a lot better than dog poop. I know. I own a goat and a dog and have done the scent challenge. Being herbivores, the goat produces a low odor manure that is easily compostable. And when was the last time a dog served up a fresh glass of milk with a higher fat content than most dairy cows (a real plus for making cheese)?

Goats also eat weeds like nobody’s business. Properly contained, they are a low cost, environmentally friendly, petroleum free alternative to the lawnmower. If we were to do a cost benefit analysis between these two creatures, I’m certain that my gentle, soft bleating, weed eating, sweet-milk-making, and compostable-manure-producing goat would win out over a giant, human sized, loud barking, carnivorous-parasite-laden-caca-excreting canine. Don’t get me wrong, I love dogs. But in terms of a practical return, I find myself begging the question “Is dog really man’s best friend?” Or have we been giving the goat short shrift? I do admit, however, that a buck belongs in rural areas, far far away from anyone with fully functioning olfactory nerves. Those guys stink.

So if male goats get the kibosh due to smell, how does one impregnate their urban doe? Good question. Down on the farm, it is officially referred to as a stud service. We sent our goats back to their place of birth for a six week romantic holiday with one very attractive buck. Technically, he is Lucy’s half brother, but in human terms it would be like mating with a third half-cousin once removed. They just don’t abide by the same rules as we do.

The legality of goats in San Francisco is a bit iffy. City code vaguely alludes that two goats may be kept for “family purposes,” whatever that means. I love laws that allow for loose interpretation. The buzz around town is that the city enforces laws based on complaints and so far, our neighbors have been nothing but supportive. I attribute this, in part, to the fact that they come from places like China, Vietnam, the Philippines, Honduras, El Salvador, and Guatemala where food production in cities is not unheard of, where families might own a few chickens, and where most folks with a patch of earth will plant a few edible crops. When I offer my neighbors eggs, they beam with smiles and wax nostalgic for the fresh eggs they remember eating in their home countries. Thus I continue onward, as if this urban farm business of raising goats and keeping chickens is perfectly normal.

Hopefully, by keeping our noses clean and being considerate towards our neighbors and community, we will help to dismantle the idea that the urban landscape is a place only for the sterile, the concrete, and the man-made. Instead, by keeping small livestock and growing a bountiful garden, we hope to recreate the city as a place of natural beauty, filled with smatterings from our agrarian roots that contribute to overall health and sustenance. One goat at a time.