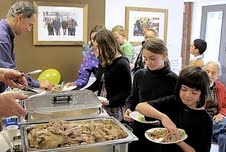 While children zip around the Northeastern rural property, adults mingle and serve up heaping portions of macaroni and cheese and colorful salads. The kids revel in a long lineup of activities: greeting animal guests (alpacas and a boa constrictor, recently), kite-making, improv games, and seed planting. More than anything, the scene resembles a small-town fair. But it is simply another night at the Montague Farm Café. The free dinner is hosted by the Buddhist Montague Farm Zen House in Montague, Massachusetts, as part of the group’s efforts to promote sustainable food and health.

“The Buddhist lineage we’re part of has an emphasis on social engagement,” says Karen Werner, Montague Farm Zen House director. The group invites people from their region, and especially from local shelters, to eat with them at least once a month; in addition, they sponsor monthly dinners in town, grow food in a greenhouse, invite doctors and pastoral care counselors to treat those at their community gatherings and recently decided to break ground on a new outdoor garden. “The garden, growing food for the community meals we provide and feeding families that experience food insecurity are part of that social engagement.”

The specter of hunger hovers in the consciousness of Werner and Montague Farm residents. Nearly a third of the families in the Zen house’s area experience food insecurity, meaning that they do not always have access to or money for enough nutritious and safe food. Montague Farm provides transportation to their dinners for less affluent folk, who may not have the resources to drive into the country—or prepare organic, local fare. With the meals, “there’s an idea that everyone bears witness to experiences outside our own. We offer a space to serve with love and dignity,” Werner says.

Although the sustainable food movement is typically viewed as a secular force, Werner and other Buddhists don’t separate spirituality and slow food. “A big part of Zen and lot of Buddhism is that everything is practice. That includes gardening, serving a meal, picking up people and offering rides,” Werner explains. “So there’s no limit to when we can practice. That means really connecting, dropping the past and future, connecting to the present. There’s always an opportunity for that in the garden or with someone eating our food.”

Religion and farming are seldom closely associated in our minds, but historically, strong ties unite Buddhism and working the land. In Thailand, a breakaway branch of Buddhism, Santi Asoke, advocates a simple lifestyle and organic farming while rejecting consumerism. Soto Zen, one of three sects of Zen in Japanese Buddhism, used to be snubbed as “farmers’ zen,” a practice for the common people.

At Green Gulch Farm Zen Center near Mill Valley, California, Sarajane Snyder acknowledges that background and sees the work she and others do as a continuation of Soto Zen’s beginnings. Green Gulch began a five-acre organic farm in 1972, and the coastal plot has remained a central aspect of the center ever since. Schoolchildren visit the farm to learn about composting and beekeeping, and the center donates a portion of its harvest to nearby soup kitchens. Primarily, though, the farm is just that—a farm—and it requires the constant, time-consuming and dirty work any other organic operation does.

“Soto Zen evolved an idea that a day without work is a day without food,” the Green Gulch farm manager says. “That spirit is strong at the San Francisco Zen Center, of which Green Gulch is a part.” Snyder is no stranger to a busy schedule as spring arrives. She and her crew recently planted crops that do well in the near-perennial fog: arugula, squash, potatoes. The organic farm’s rejection of chemicals stems not only from a desire for healthy produce but also from a deeper communion with the land’s ecology.

“The essence of Buddhist teaching, for me, is that everything is connected to everything else. Nothing is separate,” Snyder explains. “When you understand that as a farmer, working with the land, crops, insects, water and sun, it becomes obvious that this teaching is true about the whole physical world.”

Green Gulch residents embody that lesson every Wednesday morning, when the 50 or so students rise early to hoe the land in the dawn light. They silently pull up weeds the old-fashioned way, using their movement as a sort of meditation.

Lest you think that all your Green Gulch produce is lovingly raised by praying monks, Snyder offers a reality check:

“We do offer incense every morning before work, but it’s pretty farmy,” she says. Although the center’s retreat residents work there weekly, the bulk of the planting, weeding and gathering is done by the farm staff. “We drive around in truck, work fast to get stuff done, and talk a lot,” she adds with a laugh. That said, the broccoli and beans they sell at local farmers markets and that are served at San Francisco’s landmark vegetarian restaurant Greens were raised with a unique approach.

“I see the farm as part of much larger movement” linking sustainably grown food and Buddhism, Snyder says. “Some people say that Zen Buddhism is a religion and organic farming is a lifestyle, but personally, I find that to be a bogus claim. They’re equally important work.”

As spring days continue to warm and the sun stays out longer, both the Montague and Green Gulch farms will coax food out of the chemical-free soil. The Buddhists who tend that land will practice mindfulness and offer greens to the hungry. And although not everyone who eats those veggies meditates or cares where their food was grown, they will be nourished by the lettuce, tomatoes and beans that were grown for them. And thus they are connected to a larger, intricate cycle.

Catherine Ryan is a freelance writer who focuses on food and the environment. Other examples of her work can be found at catherine-ryan.com. Read more >