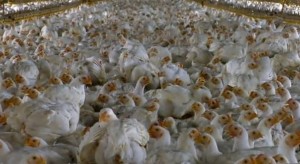 Last week, the Department of Justice announced the panel for the second public workshop on regulation and competition issues in agriculture, which will take place this Friday, May 21 in Normal, Alabama. The workshop will focus on production contracts, concentration and buyer power in the poultry industry, in which four of the top producers — Pilgrim’s Pride, Tyson, Perdue, and Sanderson Farms — controlled 58.5% of the poultry market as of January 2007. U.S. Attorney General Eric Holder, USDA Secretary Tom Vilsack and Assistant Attorney General for the Justice Department’s Antitrust Division Christine Varney will be at Friday’s workshop, which is important because it gives producers, consumers and advocates a chance to speak on record about how the practices of these companies affect them.

In the last forty years there has been a shift towards the use of poultry contracts between companies and farmers, which now represents 90% of the industry. The Campaign for Contract Agriculture Reform‘s legislative coordinator Steven D. Etka will be speaking on the panel this Friday. He explains in his letter [PDF] to the DOJ that in contract-based agriculture, farmers are paid not for their product, but for their services, as the corporate entity owns the product. This means that rather than being simply an issue of price, the contract terms, payments and relationship between the grower and the corporation becomes the main source of anti-competitive behavior.

According to Farm Aid, some of these practices include dropping a contract without fair warning, providing ill or weak chicks that die within days of delivery, halting or delaying the delivery of new birds, and requiring farmers to make expensive upgrades to their facilities without adequate compensation. Etka’s letter highlights the fact that while the USDA’s Grain Inspection, Packers and Stockyards Agency (GIPSA) has the authority to regulate the livestock industry through the 1921 Packers and Stockyards Act, poultry falls into a loophole, and thus, “From the poultry company’s perspective, breaking the law and increasing company profits through fraudulent or deceptive practices carries little financial or legal risk.”

Another speaker on the panel will be Carole Morison, whose Perdue-contracted poultry operation was featured in the film Food, Inc. last year. In the film, Morison explains why many farmers are too intimidated to speak up about anti-competitive practices. “The companies keep the farmers under their thumb because of the debt that the farmers have,” she says. “To build one poultry house is anywhere from $280,000-$300,000 per house. And once you make your initial investment, the companies constantly come back with demands for upgrades for new equipment and the grower has no choice. They have to do it or you are threatened with the loss of a contract… to have no say in your business, it’s degrading.”

Here is the clip from Food, Inc., which shows Morison in her poultry facility, a fairly typical mid-size poultry operation:

You can also read this recent interview with Morison on Civil Eats by Twilight Greenaway. Morison’s letter [PDF] to the DOJ gives more details about what went on at her farm. The other panelists’ letters make for interesting reading too; note that the National Chicken Council is the only one supporting business as usual.

The Department of Justice requested comments on competition issues last year, and were flooded with over 15,000 so far, which can be read here. The DOJ continues to accept comments at agriculturalworkshops@usdoj.gov.

You can also hear what some of the farmers had to say at the first public workshop in Ankeny, Iowa in December by watching this video: