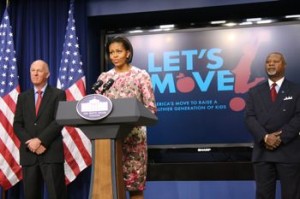 Sixteen of the top U.S. food and beverage manufacturers announced yesterday they will work toward removing 1.5 trillion calories from the American diet annually by 2015, with a total of 1 trillion to be cut by 2012.

The pledge to cut major calories from food products is an agreement between the Partnership for a Healthier America, an independent, nonpartisan organization, and The Healthy Weight Commitment Foundation, a coalition of 80 of the nation’s largest retailers, non-profits and food and beverage companies.

First Lady Michelle Obama, who is leading a national effort to solve the childhood obesity epidemic within a generation, praised the agreement at a White House press event yesterday, during which the announcement was made.

“Solving the obesity epidemic requires far more than anything government can do alone and today’s announcement represents an important step forward to providing Americans with healthier choices so that they can choose to lead healthier lives,” said Mrs. Obama, who also serves as honorary chair of the Partnership.

How will the biggest food and beverage companies cut those pesky calories? According to the coalition, companies will expand and introduce new lower-calorie options; change product recipes, where possible, to lower the calorie content of current products; and/or reduce portion sizes of existing single-serve products.

To make sure companies are meeting their calorie reductions, the Partnership will collect data and monitor progress on an annual basis and the Robert Wood Johnson Foundation (RWJF) will evaluate whether or not the industry effort will affect calories consumed by children and adolescents.

By all accounts, the agreement marks an unprecedented commitment from food and beverage companies to cut calories and press for healthier options in the processed food sector, but the announcement yesterday–which was short on details–left food policy experts and the media asking a lot of questions.

“What are we to make of all this? asked food politics guru, author, and professor Marion Nestle on her blog after the announcement yesterday. “[Is] this a great step forward or a crass food industry publicity stunt?”

“History suggests the latter possibility,” wrote Nestle. “Food companies have gotten great press from announcing changes to their products.  On the other hand, the RWJF evaluation sounds plenty serious, and top-notch people are involved in it.  If the companies fail to do as promised, this will be evident and evident reason for regulation.”

“It’s a big moment in the history of food politics and child health,” says Kohan. “The participating food giants own many of the most identifiable, quintessentially American and long-beloved brands, and they have now voluntarily staked their good names on this commitment, and publicly married themselves to Mrs. Obama’s campaign.”

In a Q&A following the White House event yesterday, a small crowd of reporters grilled Lisa Gable, executive director of the Healthy Weight Commitment Foundation, for more detail on the industry pledge.

Most hard-hitting questions on statistics, percentages, and on specific examples of caloric reductions were met with a referral to Foundation fact sheets–which don’t provide much additional detail.