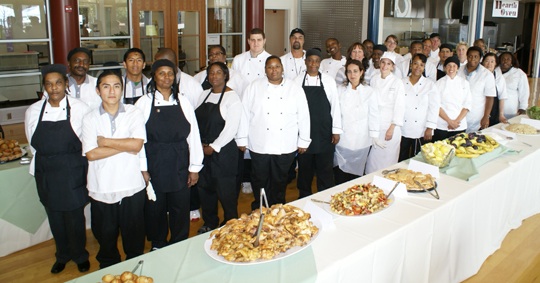 An ex-Washington Post reporter, who now blogs about school food, recently spent a week embedded in the central kitchen of the Berkeley Unified School District (BUSD) in Northern California.

Ed Bruske’s mission: To find out how one school community manages to cook food from scratch for its students.

What’s going on in Berkeley isn’t news to those of us, myself included, who live in the town and whose child attends a BUSD school.

But, of course, lots of school-food fixers around the country want the inside scoop on how to get real meals into school cafeteria. “I’m so glad Ed did this,” says Ann Cooper, the “renegade lunch lady,” who was brought in to overhaul Berkeley’s school food five years ago. “It’s great when an outsider comes in and reports back, as opposed to singing your own praises.”

Bruske’s the man for the job. Earlier this year, he embarked on a similar reporting project. He wanted to know just what gets dished up for lunch at his daughter’s elementary school in Washington, D.C. So Bruske, a personal chef, detailed his culinary misadventures with school cafeteria food in the nation’s capital in a seven-part series called Tales from a D.C. Kitchen. Not surprisingly, he discovered that the kids ate pre-cooked, processed foods, not unlike the fare the Berkeley school district rejected several years ago.

Many schools–as you probably know unless you’ve been hidden under a pile of commodity chicken nugget boxes lately–typically dish up frozen, industrially manufactured foods. “The joke in school food circles these days is that the most important tool in modern school kitchens has become the box cutter,” writes Bruske in his blog The Slow Cook. All the better to quickly slice through the boxes and plastic wrap to get to the “food-like” products, such as the ubiquitous chicken nuggets and tater tots. Then they’re ready for the microwave and served up on plastic trays in time for lunch.

Bruske’s series ran for a week. His first post focuses on prepping chicken, which in Berkeley means frozen pieces marinated in teriyaki sauce, not those pulverized patties pushed in cafeterias across the country that Jamie Oliver deconstructed for kids on his recent Food Revolution reality TV show, set in Huntington, West Virginia–dubbed the unhealthiest town in the U.S. (The Huntington kids, um, ate them up unlike kids in England, who refused to touch the patties when The Naked Chef conducted the same experiment there.) 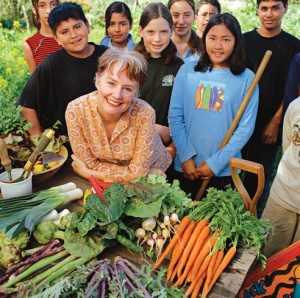 The takeaway from Bruske’s initial installment? Making real food requires real labor. Labor takes time and time is money. And even in Berkeley’s much-touted model school food program, which has benefited from the culinary chops of Alice Waters and Ann Cooper — the grand dames of the school food improvement movement — you will still see pizza on the menu at least once and sometimes twice a week. Nachos too. That’s true for all 16 Berkeley schools, even at Martin Luther King Jr. Middle School, home to the Edible Schoolyard and the state-of-the-art Dining Commons. (In fairness, that’s pizza with a whole-wheat crust, scratch sauce, veggie toppings, and turkey sausage. And the nachos are made with whole foods as well.)

Still, as Bruske notes: “Alice Waters might cringe at the way her food rules have been bent to accommodate juvenile tastes.”

In his second BUSD blog Bruske, who also tends his own urban farm and teaches food appreciation in an after-school program at his daughter’s school, recounts how the activism of Berkeley parents was key to the food revolution that has taken place in a town well-known for political activism. Up until five years ago, Berkeley schools served up corn dogs, canned commodity vegetables, and fruits laden with high fructose corn syrup. This kind of food in a place dubbed the Gourmet Ghetto, home to Alice Waters and her “delicious revolution,” with its focus on fresh, local, seasonal ingredients. Waters toured the cafeterias and reported that they looked like prisons, notes Bruske.

Until the parents protested. It took, of course, much lobbying of school administrators and local politicians, teaming up with advocacy groups like the Center for Ecoliteracy, and educating voters to bring about change and find the money to make it happen. It didn’t hurt, of course, that Waters’ Chez Panisse Foundation granted around “$100,000ish” to bring Cooper in as a consultant to get the job done. As former school superintendent Michelle Lawrence says in this installment, you have to invest in food in the same way you invest in books.

Cooper worked hard to get rid of processed foods and flavored milk, and introduced salad bars, whole grains, and loads of raw vegetables, which find their way into cooked meals.  During Cooper’s tenure — she left a year ago to tackle a similar problem at a school district three times the size of Berkeley in Boulder, Colorado — the Dining Commons was built at Martin Luther King, Jr, Middle School.

It now serves as the central kitchen for the entire district of 16 schools. The Dining Commons looks lovely, and happens to be housed at the same school as the Edible Schoolyard, the kitchen-garden program also started by Waters. (Full disclosure: I’ve been a volunteer in the kitchen there for the past five years.)

In part three, Bruske reveals why it’s so important to have real chefs in school kitchens — and just how rare that is. For BUSD executive chef Bonnie Christensen, who has done stints in some of the best NYC restaurants, and sous chef Joan Gallagher, plating aesthetically-pleasing food for students is an essential part of their culinary craft, writes Bruske. They must also comply with food rules and regulations, work within a tight budget, and meet all the federal nutritional requirements — including all that nonsense about two starches that drove Jamie Oliver crazy in his recent TV series. 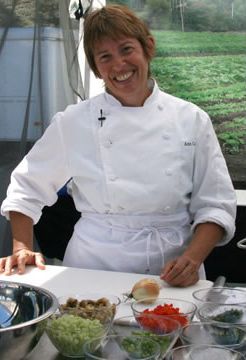 In the fourth installment, we learn how Cooper combed the school district budget and was savvy enough to find funds slated for “Meals for Needy,” which should have been going to school food but weren’t. That turned out to be manna from heaven for the Berkeley cooking crew — an extra $879,000 in cash this year, which represents around 24 percent of the entire school food budget, Bruske notes.  Cooper also started providing free school breakfast for all of the 9,100 Berkeley students.  Serving breakfast, Cooper learned, is essentially a cash cow for the school food program; extra revenue from breakfast helps pay for better food at lunch.

There are school breakfast naysayers: Some teachers aren’t too keen about the time it takes away from teaching and the increased mess in the classroom, which can attract unwanted creatures. Some parents grumble that their child now eats two breakfasts. But, as Bruske points out, breakfast in Berkeley is typically a small, fruit muffin or box of whole grain cereal with a low sugar content, plain, organic milk, and fresh fruit.

In his final post on the subject, Bruske works the lunch line and reveals just how hard it is to get middle schoolers to eat their greens and beans. Progress, it seems, happens in small steps, even in a green education paradise like Berkeley. The BUSD kitchen staff work hard to incorporate produce in ways that are attractive to students — they roast veggies rather than steam, (which enhances flavor and appearance), vegetables also show up in pasta sauces, meat loaf, shepherd’s pie, and soup.

An epilogue for the series is here. You can read all the installments in their entirety by visiting The Slow Cook.

So, just how well is the BUSD program doing? The numbers of kids signed up for school lunch hasn’t grown much since the changes were put in place, and participation is essential for keeping costs on track. About a quarter of Berkeley school kids eat the federally-subsidized school meal; nearly 70 percent of the lunches served go to students who are eligible for free or reduced-priced meals based on family income.

Most high school students still leave school to forage for food, typically at fast food joints close to campus. But the program isn’t losing money. “It essentially breaks even and we no longer take money from the general fund,” Bonnie Christensen told me. “There isn’t any profit, per se, any money left over after paying for food, labor, and supplies is reinvested in the program. But we are paying our bills and staying in the black. We keep a watchful eye over our expenses on a daily basis. We work within a very tight budget. There is no wiggle room.”

Christensen also told me that training and educating kitchen staff on how to cook from scratch is a constant, time-consuming job. Some really care and feel empowered because they’re learning new skills, she notes. But it can be difficult to get everyone on board and she is largely working with relatively unskilled workers. “Until we as a society value the food service employees and pay them a living wage, then doing this job will continue to be a challenge.”

Still she’s committed to the task. “I do this job with pride — I come in at 4:45 a.m. and leave around 2 p.m. and I’m wiped out by the end of the day. But I do this because I’m a mother as well as a chef, and what could be more important than feeding all our children well?” asks Christensen, whose two children will attend BUSD schools next year.

Of course, Berkeley is a small school system, not beholden to huge food service corporations such as Chartwells, Sodexo, and Aramarck, which have contracts with more than 500 school districts around the country, writes Bruske in his final post from the field.

Is it possible, then, for a large school district, say in Chicago, New York City, or Washington, D.C., to achieve what Berkeley has achieved?

Absolutely, says Cooper. “But it takes systemic change, it doesn’t happen overnight, and it requires a lot of money — that’s the reality,” she adds. “And you need to get as many students participating in the program — so your labor costs are a lower percentage of your overall costs — and you need your staff to buy in to the program and receive training on cooking with raw ingredients. But we did it in Berkeley, I’m doing it Boulder. It is absolutely possible.”

Could you see this kind of program working in your child’s school? What obstacles do you think you’d face? Do you have questions or comments about Berkeley’s school food program?

Feel free to chime in below.

A version of this post originally published on Lettuce Eat Kale