Where The Food Revolution Begins 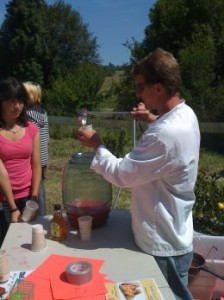 When Jamie Oliver set out to change the eating habits of people in Huntington, West Virginia, he cut up a whole raw chicken in front of a group of school children. He started by removing the breasts, legs, and wings and separating them from the leftover carcass. Then he asked the children which pile contained the best parts of the chicken, and they pointed to the good pile. Then he put the other pile, the skin and carcass, in a blender and pulverized it. When he told the kids those were the parts used to make chicken nuggets, they all said, “Ewww!” But when he formed the blended bone and cartilage into patties, fried them, and asked who would like one, a bunch of hands shot up.

We who live in the land of the Edible Schoolyard like to think this would only happen in Huntington, West Virginia, but that is far from the case. Santa Cruz High School student Nick Morris recently filmed students in the lunchroom at one of Santa Cruz’s public elementary schools as they approached the new salad bar. The kindergarteners, along with a few first graders, moved right in and filled their plates with fresh organic lettuce and raw vegetables. But the older students’ eyes never even met the salad bar.

“Kids in our schools are conditioned,” says Santa Cruz City Schools’ Food Director Jamie Smith, “to eat food that is either brown or white. I can put anything out there,” he says, “but that doesn’t mean they’re going to eat it.”

Like the kindergarteners who were Santa Cruz City Schools’ first dual immersion class and are now the program’s first sixth graders, our students’ palettes are going to take time to develop. That is why education is such an important component of the national movement toward healthy school meals. And that is why Doron Comerchero’s “Food, What?!” program is so powerful. Doron is not waiting, any more than Jamie Smith is, for those first salad bar tasters to grow up; he’s educating teens now in what he calls “ a youth empowerment program using food through sustainable agriculture and health.” And students enrolled in “Food, What?!” recently hosted their annual Strawberry Blast at the UCSC Farm, inviting two to three hundred middle and high schoolers from the area to an event featuring organic strawberries grown on the farm.

On the day of the Strawberry Blast, Jorge, a Costanoa senior and one of Food What’s biggest proponents, was helping run Fast Food Jeapordy, with groups of students from different schools competing for a flat of organic strawberries. One of the Jeapordy questions was: Which has the most calories? A six-inch turkey sandwich with veggies on wheat, a small strawberry smoothie, or a large coke? One group said the sandwich. Another group said the smoothie. Nobody had the right answer, the large coke.

Not far from the Jeapordy game, Jamie Smith was serving Agua Fresca made from organic strawberries and agave nectar, but students had to work for those strawberries too.

“Pick a word,” Jamie told a student, pointing to a stack of papers.

She picked up one that said “potatoes.”

“What do you think of first when you see that word?”

“Fries. Do you cook them yourself at home?”

It was the opportunity Jamie had been waiting for. He encouraged her to try making the fries from scratch so that she could see how much oil it took. And every time a new group of students approached the table, Jamie asked them how they liked the new food at school. Most of them said they didn’t.

“I don’t take it as an insult,” he said. “It’s a process. There are so many rules from the USDA I have to follow. But the food’s going to get better every year, and I’m going to break more and more rules.”

That’s why they call it a Food Revolution. That’s why “justice” is one of the key words in Food What’s mission statement. Organic healthy food isn’t just for Chez Panisse worshipers like this writer, whose offspring makes crepes with olive tapenade, and organic healthy food isn’t just for students whose school meals are subsidized. Until all of our students gather around the same table for organic food grown in their own communities, the parents and teachers talking about it are like the adults we can’t understand in a Charlie Brown movie. Kids do what their friends are doing. Jamie Oliver knows it, and so does Jamie Smith. The revolution begins and ends with our youth.