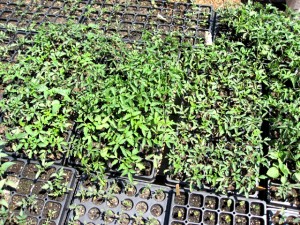 New York is about to become the home to a very big, very high farm. It’s called Brooklyn Grange, and it’s a one-acre rooftop soil farm that our Brooklyn-based team is installing next month on a six story factory building on Northern Boulevard in Long Island City, Queens.

Modeled after the Eagle Street Rooftop Farm in Greenpoint, Brooklyn, the Grange uses bare-bones green roof technology and eight-inch-deep organic soil to grow an array of fresh vegetables on otherwise unused roof space. But unlike the Greenpoint farm and most other urban farms nation-wide, Brooklyn Grange is a commercial operation that will sell its produce and sustain itself fiscally.

The idea is that this will be the first of many farms, and that as we expand to more and more roofs we’ll be able to employ full-time urban farmers and pay them a living wage to grow good food in New York for New Yorkers. Our vision is that eventually all of the structurally-sound roofs in this city and every other city will have edible plants growing on them, and that urban farming will become a viable green industry.

We at Brooklyn Grange realize that the whole idea is rather lofty (apologies for the pun), but we’re doing it anyway. Over the past ten months we’ve been planning, raising money, and pitching our business plan to investors and property owners. We’ve had several landlords reject us, and we’ve rejected a few of them too because they didn’t have the right kind of roof. For a second there we thought that maybe we’d have to wait till next year to launch the farm, but we’re moving forward and installing next week on the best roof we could find, in Queens.

There are forces working against us – gravity and skepticism being among the top few. But despite the obvious challenges that come with getting a one acre, 500 ton urban farm off the ground we’ve gotten an enormous amount of positive feedback and support. New Yorkers want this farm, and they’ve rallied behind us to make sure it happens.

Since our first fundraiser last fall we’ve received small donations from thousands of individuals and dozens of small businesses in the area. We get daily emails from neighbors who want to volunteer and get their hands dirty working on our farm. And it’s because of all this support that the farm has grown from a big idea to a tangible reality.

We’ve got an acre of green roofing material and 1.2 million pounds of light weight soil mix being delivered next week, the cranes are at the ready to lift it all up, and we farmers are poised – rakes and shovels in hand – to turn it all into a farm.

In a few short weeks we’ll have our opening market and you’ll be welcome to come visit our peas, tomatoes, carrots and kale, but if you’re interested in getting involved and supporting us in the meantime, please visit our Kickstarter page and make a pledge to help us pay for some odds and ends.

For more info about Brooklyn Grange, check out our website.

Gwen Schantz is an environmental consultant and writer based in Brooklyn, New York. Her background is in new media marketing and campaigns, and she has experience promoting environmental causes including food and farm sustainability, water conservation and energy supply reform. Read more >