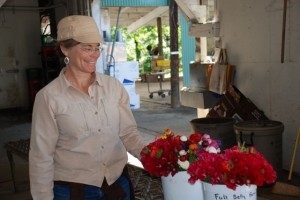 My no-nonsense New England mother instilled in me the belief that Mother’s Day was about manufactured rather than genuine sentiment. She also shunned formality when it came to flowers, preferring bouquets plucked from our garden to anything a florist could dish up. But now that she’s gone, the holiday has assumed for me an unbidden emotional significance. I always want to observe it, but I’m never sure how. This last weekend, quite by accident, I found my answer: I happened to spend Friday morning on an organic farm.

I was transported by the (re)birth that is springtime at Full Belly Farm, about 90 miles northwest of San Francisco in the always rolling and now verdant hills of the Capay Valley. We drove down the farm’s dirt road past sheep grazing on cover crop, past the first plantings of tomatoes and basil, bright green against rich dark soil, and pulled up beside a chicken sanctuary, where a genial gang of hens was strolling around in the sunshine, considering the day.

Judith Redmond, one of the Full Belly owners, was there to meet us, and we walked the farm with her, visiting all the newness. In the grape arbors, fresh shoots were pushing through too hopeful leaves that had been caught and shriveled in a recent frost. In the peach orchard, fruit specialist Sergio Jacobo, who has worked at the farm for 20 years, was slowly making his way through a bower of June Pride trees, judging how many ripe peaches each branch could support and picking off tiny orbs the size of olives to thin the eventual bounty. It will take him and his helpers about a month to prune the peach orchards by hand.

Across the road, sheltered among a grove of trees, a group of third-graders from the Stone Bridge public charter school in Napa were packing up their tents and cooking equipment, finishing up three days at the farm. They’d eaten Tokyo turnips, spring garlic, lettuce and onions, and fresh eggs, they’d milked a cow, and the day before they’d picked 1,500 onions, washed and wrapped them into bunches and put them into the farm’s CSA boxes. “That may have been the high point,” one of their chaperones told us. “They had a hay ride, they swam in the creek, but they really were proud of the work they did.” Later in the day, they would be picking strawberries, which, we were told, was “likely to be eating strawberries.”

As we walked, we also talked about some of the problems confronting agriculture and this food system of ours. The E. coli strain 0145, which has just recently turned up in bagged Romaine lettuce, reemphasizes the urgent need for better methods of tracing foods back to their source. “Ninety-eight percent of the issues come from the processing plants, not from fresh-cut produce,” Judith commented. (When the FDA cautioned all Americans to stop buying spinach during the E. coli crisis of 2006, my family went right on eating it, because we buy from Full Belly at the farmer’s market in Berkeley.)

Judith also talked about the need to forge virtuous nutrient cycles that will routinely return beneficial “waste” from urban centers to the farms.  “We send out a couple tons of organic matter every couple of days,” she said. “We need that kind of material to come back to us as part of an organized give and take.”

And then there’s the mysterious, ongoing calamity of bee collapse. Full Belly is known for “farmscaping,” an agricultural approach whereby its 250 acres of growing field and pasture is latticed, along with cover crops, by hedgerows of native plants brought down from the surrounding hills and replanted to attract insects. Some of these plants are selected for their habit of blooming, and thus producing nectar, in the winter months, when bees find themselves on a stricter diet. Biologists at UC Davis (Judith is an alum) have studied Full Belly’s self-pollinating system, which offers a model for other larger-scale organic farms.

“We’re going to make butter!” one of the kids called out as they headed down a path bordering another tomato field. “That’s fun!” Judith called back. “I wonder how you’re going to do it!” As for us, we headed into the shade of the packing shed and ducked into a solar-powered walk-in refrigerator, where hundreds of flowers – snapdragons, godetia, peonies, ranunculus, and so many others – waited in the cool darkness to be assigned their destinations. The Mother’s Day bouquets, each about to be on its way. Oh yes, I thought, my mother would have loved these.

As I look back on the weekend, I’m really enjoying the thought of how each was given and received, and is blooming right now in a place of love and honor.