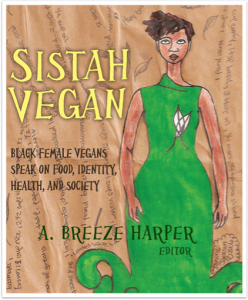 Blogger, author and Ph.D. candidate A. Breeze Harper has brought together a group of black women writers to deconstruct the notions of veganism in Sistah Vegan: Black Female Vegans Speak on Food, Identity, Health and Society (Lantern Books, March 2010). In this book, she and 30 writers addresses veganism, often thought of as a white construct, as a way of life for many black women and a core part of their values. This book broadens the view of the vegan from the perspective of race, class, gender and politics.

Harper, who consumes a whole food oriented, plant based diet, started The Sistah Vegan project as an online community, to get to the root of the questions she saw emerging around veganism, especially as it related to black females. The thought provoking essays, poems and critical writings in the book offer something for the person exploring becoming a vegan, or one who is learning about the impact of all the food we put in our mouths. The fearless writers in Sistah Vegan offer up new perspectives, and an unflinching lens on what food means to women of color and their family members. “This is the first volume of its kind to address the racialized, sexualized-gendered vegan in the USA,” Harper says.

The Sistah Vegans each offer up their diverse perspectives on their choice to pursue a vegan life. But they do have something distinct in common—they see their dietary choice as a way of self-empowerment. Whether they came to the decision to go vegan came at an early age, or later, most connected their food choices to taking control of their health. They have also seen food as a way to move away from social victimization.

Harper is clear that this isn’t a vegan manifesto, rather it is a compilation of voices each willing to share how they got to this point and its significance in changing the world.

In an African American culture that is firmly anchored in food love, deciding to become a vegan may be a personally easy decision, but it is almost never without its challenges.

One essay by college professor, Michelle R. Loyd-Page, is about her initiation into the vegan life through a New Year’s fast at her church. Loyd-Page points to the immediate health benefits of just 30 days of no meat. She attributes her change in diet to weight loss and reduction in hot flashes. Loyd-Page makes a bold declaration that black folks are killing themselves and shortening their lifespan by the foods they choose to eat. And it might sound a bit zealous, if it wasn’t for the fact that the data shows many of the chronic diseases–obesity, diabetes, some cancers, cardiovascular disease–that are linked to premature mortality in communities of color are connected to what we eat and how we move. Many of the authors make strong links between what we eat and our health outcomes, and more than a few tie food choices to our reproductive health. There is no doubt that after reading Sistah Vegan, it will be difficult to look at what we eat in the same way again.

One of the more exciting and amusing (she probably didn’t expect me to be amused) essays is Young, Black and Vegan, by Joi Marie Probus, who practices the vegan lifestyle for purely ethical reasons. Her approach to food through the humane treatment of animals is somewhat of an enigma to her friends and family. She says she is the only person she knows who has looked at veganism over vegetarianism as a statement on the treatment of animals. And while her values in many ways line up to PETA (People for the Ethical Treatment of Animals), she struggled with a job with the organization doing outreach to the black community. She seemed to get hemmed up between the black community’s need to improve its health and PETA’s need to get black folks to stop wearing fur—by any means necessary. Her story reminded me of the clash between hard core, white Feminists of the 70s and 80s who challenged black women who also saw themselves as Feminists, because they weren’t radical enough, or aggressive enough, or in-your-face enough.

The beauty of this book, for people of color, for women and for activists, is that it gives a balanced view into food as a political movement and as a civil rights movement. The women writers in Sistah Vegan offer up a rare view into the thoughts, ethics, values and choices of many black women who have moved off the traditional path of food into veganism. This view can also be a lesson for traditional food systems and ethical treatment advocates into reaching people where they are, versus where you might think they should be.