Farmer Jane: Females in the Fields 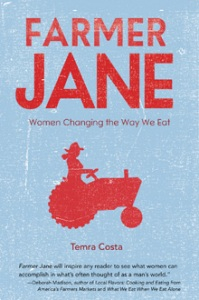 A queen of green focuses her first book on female farmers, a subject author Temra Costa comes to organically. Farmer Jane: Women Changing the Way We Eat, grew out of Costa’s career in sustainable food, and her passion for eating locally and seasonally.

While in France finishing up the manuscript for Farmer Jane, she learned how to make goat cheese and picked organic grapes at a vineyard. Back home in the San Francisco Bay Area, she tends a garden ripe with spring produce like lemons, artichokes, and greens, and turns her hand to canning and jamming her excess bounty.

For six years Costa worked with the Community Alliance with Family Farmers (CAFF), supporting the Farm to School initiative and directing the California campaign for Buy Fresh Buy Local.

In the course of her day job, she spent a lot of time with a lot of women engaged in sustainable agricultural, essentially producing food in a way that protects the health of the environment, consumers, and workers. And she thought their stories deserved a forum in what is often seen as a man’s world. 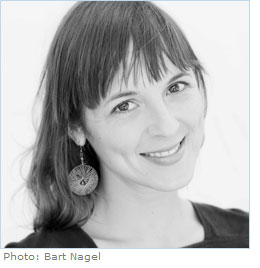 Costa wanted to bring attention to characteristics associated with the second sex, such as community, relationship-building, and the care and feeding of others at work and at home. These frequently feminine traits are central to the emerging green economy, she says, and women have an increasingly important place at the table in discussions about pressing sustainable ag issues, namely people, the planet, and profits.

Women are moving into farming at a greater rate than men, according to the author, who also notes that 60 percent of the nation’s top nonprofits focusing on sustainable ag are run and staffed by women.

But as in other aspects of society, women’s contributions are often undervalued, largely unnoticed, or simply ignored.

Not anymore. Farmer Jane profiles more than two dozen successful females in the sustainable food world. This group includes farmers, chefs, educators, policy wonks, activists, business women, and moms. Some are well known. Others, not so much. All are motivated by their desire to nurture a sustainable food agenda now–and for future generations.

But there are also lesser-known folks whose contributions are equally compelling. We learn, for instance, about the work of widowed single mom Mily Trevino-Sauceda, a child of migrant farm workers and the founder of Organizacion De Lideres Campesinas, a support network and social justice organization for mostly Latina female farm hands in California.

And in each profile in this anthology we get a strong sense of the business models, policy plans, or personal missions that have made these women standouts in the sustainable agriculture movement.

Even though a couple of them run businesses as sole proprietors, most have male partners or co-workers. Still, the power of the so-called gentler gender emerges in intriguing ways. Take the case of Emily Oakley of Three Springs Farm in Oklahoma.  When her partner Mike mans their farmers’ market stand alone the farming family brings home less cash than when Emily comes too. This female farmer says it’s her personal connection to customers — and personableness — that makes the difference.

Another farmer describes how rewarding it is to mentor women in the fields. Dru Rivers, who co-owns Full Belly Farm in Northern California, considered a pioneer in the organic food movement, has worked alongside dozens of female farm apprentices, some of whom have gone on to run their own organic farms. You can include Emily Oakley in that group.

Costa, who writes and co-hosts a radio show,  The Queens of Green, with filmmaker Deborah Koons Garcia (the filmmaker behind The Future of Food, who is featured in the book), says it’s not surprising that so many women are drawn to sustainable agriculture, with its emphasis on nurturing the land and body.  And, as her book reveals, these women are key players in the “delicious revolution” — even if they’re not as good as guys at getting credit for their efforts.

One major omission: This book is crying out for coffee-table treatment with luscious shots of these women digging in the dirt, selling produce, or cooking food. The author agrees. But, alas, she couldn’t convince her publisher. Pity. You can, however, find wonderful pics of all the women profiled on the Farmer Jane website by clicking here.

And a minor complaint: Not all of the intros to each entry includes a geographic reference. I happen to know that urban farmer Willow Rosenthal resides in my neck-of-the-woods, but not everyone else does.  Likewise, I should have known where Jesse Ziff Cool’s restaurant Flea Street Cafe is, but didn’t. You get a sense from her profile that she’s located somewhere in Northern California, but you have to flip to the back of the book to discover that her cafe is in Stanford. (Easy driving distance from me, I was delighted to discover.)

This is also a can-do kind of guide. At the end of each section Costa includes what she calls a “recipe for action” — a list of concrete advice, whether you’re an eater, farmer, food business, or all of the above. There’s also a handy resource list for readers who want to know more.

The author was inundated with suggestions of female food and farm heroes for this book. In the spirit of building community, she continues to highlight women in the field who make a difference, both on the Farmer Jane website and in stories for the national food policy blog  Civil Eats, where she most recently profiled Nikki Henderson, the new executive director of People’s Grocery in Oakland.

With campaigns like Know Your Farmer, Know Your Food, it’s a great time for the people who produce our food to receive the attention they rightly deserve. Farmer Jane ensures that the women leaders of the sustainable ag agenda have their voices heard too.

Do you have a favorite female farmer or sustainable food advocate — perhaps an unsung heroine — who you’d like folks to know about? Let us know below.