Changing Habits, One Taste Bud At A Time | Civil Eats

Changing Habits, One Taste Bud At A Time 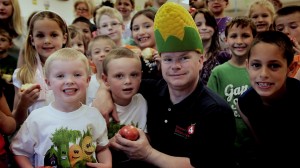 Last year, Rick Delashmit set up a Google alert for any mention of “fresh fruit and vegetables.” Not long after, he had to establish a gmail account explicitly for those alerts. Though Delashmit, who owns the Belleville Farmer’s Market in Belleville, Illinois is barraged daily with fresh produce-related information, it was one study in particular from the CDC that caught his attention when it popped into his inbox last year: 90% of school age kids aren’t getting the recommended daily allowance of fruits and vegetables.

The grocer’s disbelief was compounded the day his wife came home from her regular volunteer work handing out fruit salad cups to students at their kids’ school. “My wife was blown away by the fact that the majority of the kids who got the fruit salad were asking her what was in the cup and I’m not talking starfruit or anything. This was cantaloupe, strawberry, honeydew and grapes. For us this was a real eye opener, and that’s how we got to this conclusion that we had to do something.”

Of course a far more high profile fresh food advocate, Jamie Oliver, was similarly shocked to discover kids’ lack of familiarity with the most basic fruits and vegetables during his work with Food Revolution. Delashmit shares Oliver’s fervor but lacks the backing of Ryan Seacrest and ABC. No matter: He’s doing what he can with what he’s got. His hyper-local, low-cost, and until recently, low-profile effort called Taste Buds aims not to change the country’s eating habits, or the way school lunches are prepared, but very simply, to get kids to try peas and pears.

Taste Buds’ core concept, which Delashmit describes as “a fruit and vegetable field trip,” came from his five-year-old son, Reece, and is, says Delashmit, “built around what a five-year-old would think would be fun for his classmates. It doesn’t take a team of nutritionists sitting around with Rhode Scholars and PhDs. If we want kids to eat more of this stuff, let’s bring it to them.”

“When I go in that classroom,” he continues, “I’ve got ten items. We’re going to have fun and find a way to get them to try as much as possible. It’s a game, there’s a healthy dose of peer pressure involved. We challenge the kids to see who can taste more than the other team.”

Donning a giggle-inducing corncob hat, Delashmit comes into classrooms to play the “Taste Buds Fresh Factor” game with students. Broken down into teams, the kids are challenged to try three new fruits and two new vegetables to earn a point. There is a catch: to earn a point, everyone on the team must sample the item in play for that round of the challenge. When a kid struggles with a sugar snap pea, Delashmit urges his or her group to cheer their teammate on and help them find the courage to eat it. While the kids are playing, says Delashmit, “I’m dishing out all kinds of fun facts and trivia about what they’re eating and why it’s important to have fresh foods be present in their diet.”

All players are rewarded with $5 “Taste Buds Bucks” that they can convert into two free pieces of fruit in Delashmit’s two stores.

Delashmit prepares worksheets which he sends home with the kids that tell parents what their kids ate at school and how many hard-earned Taste Bud Bucks they have collected. “The goal is to make sure the parents start a conversation about the value of trying new things and reinforce the behavior by keeping some of the items the child experienced with Taste Buds in the house going forward,” he says. Since the project took off in late March, over 300 Taste Bud Bucks have been redeemed.

Delashmit credits some of the program’s success with already well-established goodwill in the community. In addition to introducing Belleville’s boys and girls to grapes and green peppers, Delashmit has been donating up to 10 percent of his two stores sales to over 60 local non-profits. The Farmer’s 4 Good program consists of some 63 (and counting) community partners made up of area schools, churches, and non-profits. It’s all very low-tech: At the end of each month, each partner’s total is tallied at which time they receive anywhere between 5-10 percent of the total sales to put directly back into their cause. In just 10 months, 5,500 customers have enrolled, sending $15,000 back into the community.

“We know our customers by name,” says Delashmit. “We sponsor all the youth t-ball and soccer teams in town every year; we purchased the city its first canine police dog; we give every kid a free piece of fruit; and we strive to never turn down a request for a donation.”

Since winning $25,000 from the Pepsi Refresh grant competition this March, Delashmit has hopped on his Taste Buds bus and visited close to 1,500 kids. Only one child has refused to try anything, and just this past weekend, says Delashmit, “Thirty-five kids were excited enough about fruits and vegetables to nag their parents to bring them to the store.”

Taste Buds began within Delashmit’s local school district 118 but now, he says, “We know how long it takes to get it done effectively. We’re going to schools in neighboring towns and districts. In the fall, we hope to expand it further and go countywide especially in low-income communities where access is often a problem. If I can get to those classrooms, we can show the kids that trying this stuff isn’t going to hurt them. And maybe some of those kids won’t throw those carrots away.”