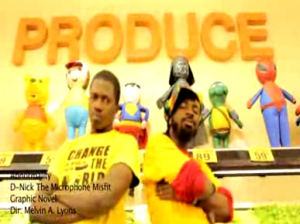 Chicago hip hop artist D-Nick The Microphone Misfit teamed up with B-Boy Super inLight to create “Abnormality“, a track for the opening of Graffiti and Grub, the Chicago health food store founded by activist LaDonna Redmond. Their video highlights the physical health issues brought on by artificial, processed foods and encourages us all to look at what we’re putting into our bodies.

D-Nick and Super inLight both embrace the acronym HIP HOP for “Healthy Independent People Helping Other People” and they are doing just that, using their talents to get the word out that “Eating healthy is the first step in disease prevention.” D-Nick has entered the video in The One Chicago, One Nation film contest, whose goal is to reward “videos that tell the stories of people in Chicago from different backgrounds working together for the common good.”

Please watch “Abnormality”, share it with friends, and show your support by voting for D-Nick–voting ends on May 9th:

Lyrics to “Abnormality” by D-Nick The Microphone Misfit:

Freedom from disease and abnormality/
Cause you don’t wanna have that stuff affecting your reality/
C’mon…..

I was Chillin’ with my brother Super InLight/
We were shooting the breeze getting our Mind right/
Laughing, talking, politics, and current events/
Buggin’out about a lot of things that don’t make sense/

And then Super all of a sudden got an urge from his tummy/
He looked up and said, “Yo D! I’m kind of hungry”/
“Help ya self in the kitchen there is food in the cabinet/
He opened up the cabinet and said “I ain’t having it/

There ain’t nothing in here except for junk food/
If I eat this It will put me in a junk mood/
No disrespect D don’t mean to be rude/
But Lays chips, French dip c’mon man duuude/

Now that’s something to think about/…