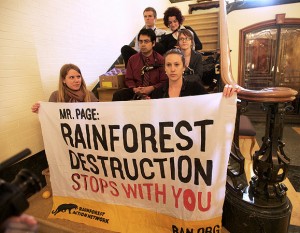 Yesterday, activists with Rainforest Action Network (RAN) occupied the executive offices of Cargill, the nation’s largest privately held agribusiness company. Cargill is also the nation’s largest importer of palm oil, a tropical fruit extract commonly found in thousands of consumer products, from soaps and detergents to breakfast cereals and biofuels. The protest comes on the heels of RAN’s newly released and highly damning report which documents systematic failures by Cargill to comply with international palm oil standards led by the Roundtable on Sustainable Palm Oil (RSPO). The report also documents rainforest destruction on two plantations that Cargill owns, but has allegedly hidden from the Indonesian government and its customers. In a statement, Cargill denied the claims, saying it produces palm oil responsibly on its own plantations and is working toward sustainable production from its suppliers. RAN issued its own statement today, in response to Cargill’s denial, standing by their position that Cargill is destroying rainforests.

Grown on massive plantations in Malaysia and Indonesia, palm oil has been associated with rainforest destruction, threatened and extinct species (including orangutans), huge increases in greenhouse gas emissions, and violations of human rights and labor laws. Its use is widespread and increasing around the world, but particularly in the U.S., where its consumption has tripled in the last five years. Cargill supplies palm oil to some of the nation’s largest food companies, including Nabisco, Kellogg’s, Nestle, Mars, Kraft, and General Mills, the last of which uses palm oil in over 100 of its products, including Cheerios and Lucky Charms. According to RAN, through their purchase of Cargill palm oil, General Mills is violating their own stated corporate social responsibility policy to “be one of the most environmentally sustainable food companies in the world.”

So, how can our food choices here make a difference thousands of miles away? When we realize how our cookies and crackers (and hundreds of other products) can be contributing to global greenhouse gases. According to RAN, worldwide, the degradation and destruction of tropical rainforests are responsible for 15 percent of all annual greenhouse gas emissions. The carbon emissions resulting from Indonesia’s rapid deforestation account for around eight percent of global emissions: more than the combined emissions from all the cars, planes, trucks, buses, and trains in the U.S. This huge carbon footprint from forest destruction has made non-industrialized Indonesia the third-largest global greenhouse gas emitter, behind only the U.S. and China.

Some good corporate actors are helping to make a difference. RAN has led a successful pledge campaign, signed by dozens of personal care product manufacturers, as well as Whole Foods Market, to call on all agribusiness companies, including Archer Daniels Midland and Bunge, to use their influence with the palm oil industry to require standards that protect rainforests. The pledge also asks companies to work with RAN to ensure that sustainable alternatives to palm oil (like coconut oil, olive oil, and rapeseed oil) are available in the marketplace. Working closely with current market leaders and palm oil producers, RAN has developed a detailed model palm oil policy that addresses weaknesses in the development and enforcement of the RSPO and incorporates the concerns of local communities, environmentalists, and development experts.

You can make a difference, too. RAN believes that bold action by Cargill to reduce the negative impacts of its palm oil operations could establish an important precedent for agribusiness throughout the world. You can start by checking labels (ingredients to look for include: “palm oil”, “palm kernel oil”, “palm fruit oil” or “palmitate”) and you can call Cargill’s CEO Gregory Page and tell him to act now to protect rainforests, communities, and the climate.