From The Belly Of The Beast: An Interview with Food Inc.'s Carole Morison | Civil Eats 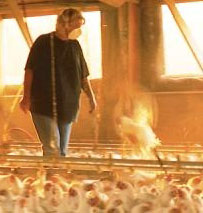