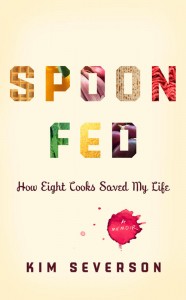 I was predisposed to like this food and family memoir. I have a healthy respect for the work of Kim Severson, who is a food writer, but also a reporter — in the dogged, determined, old-fashioned sense.

Severson brings her hard-news nous to a beat not always known for serious coverage in food stories for The New York Times, where she’s worked for six years.

She also draws on her experience writing about food at such dissimilar places as The Anchorage Daily News, and in an award-winning spin in my neck-of-the-woods at the San Francisco Chronicle, before she was whisked off to sit at the desk that once belonged to the legendary Ruth Reichl.

I was also a captive audience. Seven hours lying around waiting for your turn in the operating room will do that to you. And, let’s just say, with a surgical procedure looming and an unknown outcome hanging over my head, I was emotionally primed to respond to Spoon Fed, a personal story filled with, well, the stuff of life — and not all of it good, easy, or pretty.

I loved her honesty. I loved the gritty bits. There was a moment when I felt all gossipy — ooh, who knew the Times food critic was once a lush?

Then I checked myself and made that connection, as we all do as humans, when we digest what that must have been like for her, based on our own experience, or watching a loved one struggle. Because, let’s face it, who among us doesn’t have alcohol or some other life-sucking addiction in our inner circle?  And I felt a sense of gratitude that Severson told a story that reveals writerly insecurities — we all have ‘em — the chief one that we’re a fraud and we’ll be found out in short order. This from a gal at the top of her journalistic game. It was, frankly, comforting.

Spoon Fed: How Eight Cooks Saved My Life is a testament to struggling to discover your sense of self, coming to terms with your sexual identity, dealing with your demons, finding your professional footing, creating a new family, and learning to love and forgive the family you were born into. All in a mere 242 pages, which I consumed in one hit.

Severson chooses to tell the tale of her particular journey through the kitchen wisdom she learns from eight very different women cooks. She shares simple truths she discovers along the way, some emerge in unlikely places, at unexpected times, from unexpected people.

The female food mavens who form the heart of Spoon Fed, include Marion Cunningham, who taught Severson that in food and in life it is never too late to start over. Alice Waters reminded her of the need for perseverance and patience and the power of such tenacity. From Ruth Reichl she realized that she need only compete with herself. Marcella Hazen showed her to accept what is — and served as a cautionary tale about expectations.

Through Rachel Ray she gleaned the importance of accepting oneself; from Edna Lewis, the value of family, whether of choice or origin; Leah Chase shared the importance of faith; and her own mother, Anne Zappa Severson, an Italian-American farm girl from Wisconsin who made red sauce to-die-for, instilled in her the belief that the care and feeding of family matters most of all.

The shelf-life of the food memoir must surely be numbered, yet Spoon Fed goes beyond the genre. We get a sense of the roles these powerful women play on the cultural landscape of the American food movement, for starters. And it reminds us how much food — and our time in the kitchen — is a testament to the enduring power of love.

And that sometimes — like when the operation goes awry and you end up in the E.R. pumped full of drugs, followed by a hideous hospital stay, followed by dreary days of recovery, the best thing anyone can do in such a crisis is to feed that sorry someone something soothing. I’m just saying.

What this book isn’t: It’s not filled with whimsical descriptions of outrageously decadent dining experiences, as you might expect from a scribe at the Gray Lady. But then Reichl has that kind of memoir covered. It’s also not a book where recipes are front and center. There are signature dishes in here but I mostly glanced at them and moved on to the next chapter.

What I took away from Spoon Fed is that food is as much about family as it is about ingredients, tastes, or techniques. I know this to be true in my own home. My son tells me I’m the best cook in the world but my food is very simple. Hell, the kid liked most of his meals raw for years. But I think what he means is he feels nourished, in all ways: I will love you even if you only want to eat tofu unadorned. Feeding as an act of unconditional love.

It’s a lesson younger generations learn by osmosis. My boy came to visit, post-surgery, just because he needed to lay eyes on me to see that I was okay (I was) before he took a road trip with his dad. What did I do? I loaded them up with good things to eat for the car ride.

A few weeks later, when everything went to hell in a handbasket on the health front, what did they do? Showed up on my doorstep with a pot of soup, of course.