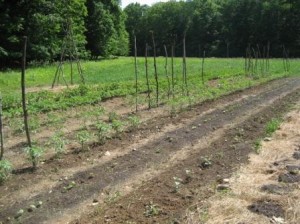 While the forecast calls for a brief return to a wintery chill the next few days, the calendar is progressing headlong into spring, and the earliest daffodils–along with the just-unfurling green buds on the dreaded and omnipresent multiflora rose–are here. Soon, the earth will warm, and your seedlings will eagerly sink their bound roots into the big, living universe of your own garden’s soil.

TRANSPLANTING
Transplanting is an intuitive and extremely satisfying garden activity. Before transplanting, your bed is empty and shapeless; after transplanting, your garden comes alive with the rhythm and structure created by the rows, grids, circles, and freeform shapes your new transplants trace.

Most of us began our garden journey with an act of transplanting, usually a few tomato or basil or lettuce seedlings purchased from a garden center. And while transplanting is quite straightforward, there are definitely some things to keep in mind for the best results. Here are five thoughts.

That’s pretty much it! A few days after transplanting, your seedling should be well rooted, and cultivation with a hoe can take place.

Growing a garden is an invitation for trouble: thousands of other beings–from deer and woodchucks to bacteria and fungi–will be eyeing your vegetables just as hungrily as you are. While a good fence will keep the larger foes from your crops, the smaller ones are usually held at bay by the plant’s own defense systems. The key is providing the conditions that allow the plant to be as strong and resilient as possible.

Below is a list of common troubles seen in garden plants during their early years, along with tips on keeping your seedlings strong, healthy, and resilient.

And with that, this series on seed-starting comes to an end. There is much more that could be written–growing food is an incredibly complex (and yet straightforward!) endeavor about which I could talk or write almost indefinitely. However, there are orders to ship and seeds to sow here, soil to prepare and a fence to mend. Spring is here, and the window of opportunity for so many great garden efforts is opening. Dive in, and good luck!

Doug Muller is co-founder of the Hudson Valley Seed Library. While teaching in Miami, he dreamed of getting back to his roots in upstate New York. In 2005 he returned, learning everything it takes to farm by hand and run a seed company. For more garden tips and to browse the seed catalog, visit www.seedlibrary.org. You can also follow the seed library on Facebook and Twitter. Read more >