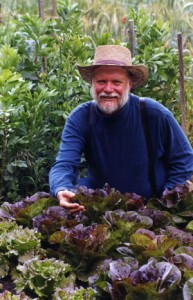 John Jeavons expects that 20 years from now most of the world’s people will be struggling to eat.

Jeavons, a developer of sustainable agriculture methods, delivered this dire message at a three-day workshop I recently attended. Although his vision might seem to approach the apocalyptic, this class was not “How to Build Your Own Backyard Bomb Shelter” or “The Book of Revelation Explained!” It covered a more humble subject, one to which we moderns have paid far too little attention: soil.

According to Jeavons, the simple dirt in which we grow our food could soon become disastrously scarce, and he promotes its replenishment with an evangelistic fervor.

This Earth Day there will no doubt be much talk of how to solve climate change, population density and our energy problems, talk that will make appeals to saving that vague abstraction known as the environment.

But perhaps it’s time to turn our attention to caring for something concrete, like the host of living organisms beneath our feet on whose health our own health — and that of our neighbors — depends. Perhaps it’s time to give the kind of attention the Yahwist writer in Genesis gave in describing our vocation as God’s creatures: till and keep the adamah, the fertile soil.

As a result of wind and water erosion fostered by conventional farming practices, between six and 24 pounds (depending on the world region) of farmable soil are lost per pound of food eaten, he said. In the U.S. our farmable soil took 3,000 years to develop. In just 250 years we have managed to squander 75 percent of it, much of it now resting at the bottom of the oceans.

It’s possible to skim past such numbers with glazed eyes; given more than a moment’s thought, however, these facts become astounding. Perhaps we should change that popular bumper sticker from “No Farms, No Food” to “No Soil, No People.”

“While soils are becoming increasingly depleted, the world population is growing, water is becoming less available, and other resources are increasingly in short supply,” Jeavons said.

To combat this trend, Jeavons has developed a small-scale, sustainable agricultural method he calls “Grow Biointensive.” Jeavons’ high-yield, low-input food-raising methods are being used by people in 141 countries, and taught by organizations such as UNICEF, Save the Children, and the Peace Corps. 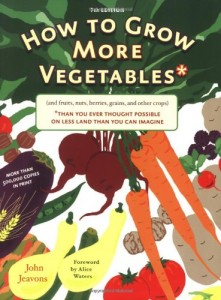 Jeavons directs Ecology Action, a think tank for promoting and developing the biointensive method, and is the author of “How to Grow More Vegetables, Fruits, Nuts, Berries, Grains, and Other Crops Than You Ever Thought Possible on Less Land Than You Can Imagine.”

He is a practicing Episcopalian. “My faith has been key in anything I’ve been able to do,” Jeavons told me. In addition to teaching people how to grow food, he believes that “we share our love through the spiritual food of the Eucharist.”

His faith, and through it his desire to create a better world, has been and continues to be the hope that keeps Jeavons going. Over the last 30 years and with a core group of committed followers, Jeavons has been quietly improving the soil and growing food crops on a steep, once-eroded hillside farm in Willits, Calif.

Jeavons, with his white hair and beard, has the air of an academic even when he’s digging in the dirt; his signature look is a tweed cap and coat with blue jeans.

During the past three decades, he has developed a method for growing food that’s 99 percent sustainable and doesn’t depend on oil. Unlike conventional farms, which are heavily dependent on petroleum fertilizers, the fertility loop at Jeavons’ farm is nearly closed. And he has reduced the space it takes to feed one person: from three-quarters of an acre to one-tenth of an acre.

One of his methods is growing soil. He plants nitrogen-rich crops like alfalfa and carbon-rich crops like corn and harvests them to make into compost. That compost is then fed to the soil, which will supply enough energy for all his other food crops.

During the first hour of our workshop Jeavons cited studies indicating that as little as 36 to 52 years of farmable soil remain on the planet — information that tempts me to despair. I think of God’s command to till and keep the fertile soil, and how human history is a long record of our failure to do that just that.

“Don’t despair,” he said. “I wouldn’t tell you all these things unless there was something we could do about it.” We then spent the next three days learning how to replenish our Earth.

And that is the hopeful conclusion as this Earth Day approaches. There is a lot we can do about it, and I’m grateful that there are John Jeavonses in the world who can show us how. We still can learn to make the care of the soil — and the attendant forms of creation care that flow from it — the daily vocation it so needs to become. In the coming decades, our lives may depend on it.

Fred Bahnson is an IATP Food & Society fellow and a Senior Fellow at the Oakland Institute. Read more >