Confronting the Defining Affliction of Our Time: A Review of Diabetes Rising | Civil Eats

Confronting the Defining Affliction of Our Time: A Review of Diabetes Rising 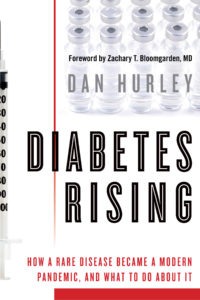 “Once upon a time, diabetes was rare.” So states Dan Hurley in his book, Diabetes Rising, an investigation into the rising, the reasons and the remedies for both types 1 and 2 diabetes. As early as the prologue, Hurley asserts his determination to belie what he calls the “misleading, mistaken, or outdated” conventional wisdom surrounding diabetes, specifically:

“Type 1 is rare and strikes out of the blue, due in part to a genetic risk, set off by perhaps a virus or some other kind of stress. To treat it, you take insulin, test your blood sugars, and carefully watch what you eat…Type 2 is far more widespread, and spreading fast along with America’s waistline. It’s caused by eating too much and exercising too little…”

Diabetes Rising unfolds in three parts. Part 1 chronicles a thorough history of diabetes and its incline, from its first printed reference in ancient Egyptian medical texts, to the discovery of insulin in 1922, to its place in modern day. In Part 2, Hurley describes five separate theories he believes are responsible for the proliferation of diabetes. It is these insightful theories, relatively new to the public consciousness (deemed “groundbreaking” in the shiny book jacket) that make this book worth reading. In Part 3, Hurley discusses possible medicinal treatments and cures for type 1 involving pills, to cures for type 2 involving surgical gastric bypass and artificial pancreases. More important than a cure is prevention, which Hurley advocates as the ultimate key to ending diabetes in his chapter, The Public Health Cure.

Today, public figures are expressing an overt interest in saving our lives. Health efforts, like Mayor Bloomberg’s necessarily grotesque anti-soda ads in subways and ABC’s new series Jamie Oliver’s Food Revolution, help to bring the conversation surrounding nutrition and child obesity to the forefront of our awareness. Diabetes, the 6th leading cause of death in the U.S., according to the Center for Disease Control and Prevention, has risen to such formidable heights over the past century that we are now spending an estimated $116 billion on its medical treatment annually. The imminent danger of this chronic condition, most commonly attributed to obesity and a poor diet, is at the heart (or gut) of the initiatives in place for a healthier society.

Hurley’s colloquial and often humorous tone makes the information-rich reading breezy and quite engaging, even for those like myself who are neither personally affected by the disease nor are in the field of medicine. (Think Fast Food Nation of public health.) A regular science contributor to The New York Times, Hurley is afflicted with type 1 diabetes, but he discusses his experience occasionally without spawning a memoir. Hurley’s agenda is to conduct an “impartial” journalistic investigation into “the defining affliction of modern Western civilization.”

His sources and theories are far reaching: in an effort to track the development of type 2 diabetes, Hurley points to the influence of weight in the Accelerator Hypothesis, a theory that implies that an increase in weight accelerates the development of diabetes for both those with inborn genetic risk (type 1) and those without (type 2). Even in light of the above, Hurley fails to point a finger at poor diet, which is what is inevitably a leading cause of weight gain. He does, however, travel to Logan County, West Virginia—home to the highest rate of type 2 diabetes in the nation.

The native Blankenship family allows Hurley to spend time with them to observe and ask questions. Randy Blankenship, the husband and father, has type 2 along with his ten siblings. Hurley joins the family for dinner where members feast on double-stuffed crusted sausage pizza. At one point, a little boy reaches for a box of junior mints as his father urges him to “’Eat your candy…Eat ‘em.’” After dinner, Hurley visits Randy’s sister in the trailer next door. Obese, on a number of failed medications, and unable to adhere to a healthy diet (“’If I wanted a bag of candy, I’d eat a bag of candy’”), she is mostly confined to a hospital bed in the trailer that she shares with her caring son. Hurley’s reaction: “How did it come to this?”

At a diabetes support group in Logan County, one citizen explains:

“My daddy, once a week he had him a full gross of potatoes, he put in the lard–and he lived till eighty–eight years old…You never heard about diabetes. They got up before daylight, fed their animals, then breakfast was ready, go to the fields. And I mean, around here, places I could show you, where they used to farm it, now people don’t even raise a garden.”

In addition to a lack of fresh produce, other fundamentals to healthy living in Logan County are mysteriously omitted, like, for example, usable sidewalks. One diabetes-stricken resident laments, “Your suburb probably has sidewalks…we don’t have those.”

Results from a monitored lifestyle program—the largest study ever conducted on the ability of diet and exercise to prevent diabetes, lead by doctor David Nathan and the Diabetes Control and Complications Trial in 2001—found that a sustained diet and exercise regime cut participants risk of developing type 2 by more than half, even more than the leading anti-diabetic oral medication, Metformin. The rate of type 2 diabetes was at 16 million the year the study was conducted. According to the CDC, and despite Nathan’s seemingly remedial findings, this rate escalated to 23.6 million, nearly a fifty percent increase, by 2009.

But in light of these figures, Hurley is quick to dismiss diet and exercise as a sound prevention method stating, “it should be clear by now to anyone willing to face up to reality that diet and exercise programs will simply not work in enough people, enough of the time, to stop the rate of type 2 from continuing its upward trajectory, or even reverse it.”

Healthy food advocates like Michael Pollan seem to disagree. In his 2009 New York Times’ article, “Big Food vs. Big Insurance,” Pollan refers to diabetes as a “preventable chronic disease,” vilifying the American way of eating as its cause. This health initiative quest is no doubt a difficult one, plagued by the very essence of our national identity. There is always a new fad diet in our country, propagated not only by hopeful best sellers and talk show hosts, but by the government itself. The American definition of “healthy eating” seems as transient as the latest model of the Macbook Pro.

Still, in Part 3 of his investigation, Hurley advocates for prevention as the ultimate key to ending diabetes and he is correct in asserting that communities and governments alike need to play roles in helping people help themselves. We see this happening in New York City, with the implementation of calorie counts on menus, Bloomberg’s public health ads, a possible salt ban and more. Initiatives like these make a clear public announcement: individual responsibility can take us only so far. Organizations of power are equally liable for the betterment of our health. As Hurley so insightfully laments, “The only thing worse than the epidemic is the apathy.”

Christina Livadiotis is an editor and writer who holds a B.A. in literature from Georgetown University. She served as an Associate Editor for Zagat Survey before escaping to rural Virginia where she farms, studies viticulture, and documents life in the foodshed at www.smallfarmtable.com. Read more >