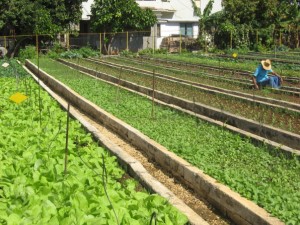 Among the adherents of the food security movement in the United States, many idolize Cuba’s experience in building a vibrant urban farming sector. This idealization is due to the lack of information available on the Cuban system, as caused by the travel embargo and media blackout there. Compounding this situation is the vast difference between the Cuban and American political and economic systems.

Cuba’s accomplishments are undeniably astounding, inspiring and a testament to the country’s flexibility and pragmatism: 350,000 new well paying jobs (out of a total workforce of 5 million) created in urban agriculture nationally; 4 million tons of fruits and vegetables produced annually in Havana, up ten-fold in a decade; and a city of 2.2 million people regionally self-sufficient in produce. These accomplishments have been supported by an extensive network of input suppliers, technical assistance providers, researchers, teachers and government agencies.

Yet, Cuban urban agriculture, no matter how inspiring, is largely irrelevant to Americans. The state is pervasive throughout Cuba and controls virtually all aspects of the official economy. The government can mobilize quickly and massively around its priorities through an array of powerful policy tools at its disposal. After 50 years of socialist rule, Cuban institutions, as well as the mentality and expectations of the Cuban public, differ vastly from those in the U.S. By way of example, the ruling motto of Cuban urban agriculture states, “We must decentralize only up to a point where control is not lost, and centralize only up to a point where initiative is not killed” embodies the vast differences between their planned economy and our free market system.

The fundamental differences between the Cuban and American systems as they relate to the success of urban agriculture are vast and, for the most part, are insurmountable.

Case in point, the success of urban agriculture in Cuba has been grounded in the distribution of public land for food production. For example, a law passed in 2008 allowed any citizen or entity to request idle lands up to 33 acres to be passed out in usufruct for 20-40 years. This law resulted in 16,000 persons requesting land in the past two years. Since all land in Cuba – with the exception of private homes – is the property of the State, the government has resources at its disposal to support its policies far beyond that of any American jurisdiction.

On the other hand, in the U.S., land use laws and private property land tenure represent a very real challenge to the expansion of urban farming. While some cities have made their minimal idle lands available for urban farming, when they do so, garden land tenure is not assured. For example, in New York City, hundreds of community gardens were threatened with destruction and dozens were ultimately plowed under when city government prioritized housing developments.

Land use planners here typically view urban agriculture as an interim land use at best, until a development opportunity with higher economic utility, such as housing, retail or manufacturing, becomes feasible. Few communities have protected urban agriculture as a permanent use in their planning documents, although this phenomenon is beginning to change. Neighbor complaints about noises, smells, visual clutter and dust created by urban farming are made frequently and deter farm permanence.

In Cuba, virtually everyone works for the State. The State sets salaries; economic incentives are controlled by the government. To incent fruit and vegetable production, the government has allowed urban agricultural enterprises to distribute part of their profits back to the workers. These quasi-free enterprise farming operations have led to some unique salary structures wherein farm workers can earn two or three times the salary of the local physicians. These incentives have thus allowed urban farms to retain high quality human resources and maximize production.

U.S. policymakers have few tools at their disposal to shape the earnings of urban agricultural producers, beyond the nigh-impossible extension of commodity subsidies. Urban farms have to compete with the rest of the labor market for qualified workers, with immigration policy also playing a large factor in agricultural labor supply.

Profit, capital and the marketplace

The economic conditions under which Cuban urban farms operate are extraordinarily different than the conditions of similar enterprises in the U.S. For example, since they do not purchase or rent the land, they have no mortgage or rental costs to pay. Inputs and technical assistance are subsidized by the government. (A visit from a technician to assess a pest problem costs one cooperative member the equivalent of two bits.) They enjoy little competition from other sources for their fruits and vegetables, which they may sell at farmers’ markets or at on-site farm stands. While capital may be difficult to access from the government, there is no private banking sector and no interest charges to bear.  As a result, the urban farms in Havana are profitable enough to redistribute a significant portion of their earnings (85 percent in one case) back to the workers. In a country where the basic wage is $10 per month and a monthly incentive of $50 per month is quite substantial, these farms clearly do not need to be making enormous profits to make a difference in the lives of their workers.

Running a profitable urban farming business in the U.S. entails a much more complex set of calculations than in Cuba. In the U.S., small farms struggle to break even, under the weight of high monthly payments for land, inputs and machinery. On the wholesale level, they face difficult access to markets for selling their products and typically receive prices near or below their cost of production. Small farms selling directly to consumers frequently face stiff competition from other farmers or other retail outlets, which are typically better capitalized. The more socially-minded farming enterprises subsidize their operations with grants for educational programs or through agri-tourism schemes. To be profitable, urban farmers must find a market niche at which they excel, such as providing ultra-fresh micro-greens to high-end restaurants or through cause-related marketing.

Necessity, the mother of invention

Cuba’s shift to urban and organic agriculture was driven by necessity. As the Soviet bloc fell in the late 1980s and early 1990s, Cuba lost the primary market for its products and its source of subsidized agricultural inputs and petroleum. The crisis that ensued was referred to by the Orwellian term, “the special period,” and they were hungry and dark times for Cuba. To its credit, the Cuban government found partial solutions to this emergency by pushing the country toward organic and urban agriculture. As one highly placed Cuban official said about the decision to support urban farming and farmers’ markets, “We moved food production and the markets as close to the people as possible because there was no oil for transportation to get the people out to the food.” This policy decision came at an ideological cost. It entailed a partial opening of urban food production to the free market, which resulted in increased social inequality through income distortions. It also was a 180-degree turn from the capital and input-intensive, Soviet-influenced production methods valued in Cuba at the time.

American interest in urban agriculture has been influenced by the state of the economy. Backyard vegetable production and seed sales for 2009 spiked significantly over 2008 levels, and urban farming in Detroit has grown rapidly as a means to deal with acres of vacant land. But, by and large, increased policymaker and public interest in urban agriculture is traced to concerns about food literacy, urban sustainability, community building, obesity prevention and – to a lesser degree – economic development and job training. These goals are important, but they are not driven by a state of emergency as Cuba suffered.

The success of Cuba’s urban agriculture program is a true inspiration to the people working to green cities here in the U.S. Yet, what is best learned from Cuba’s experience is not the specifics of how to produce more food in urban communities, but the value of alternative economic, political and social structures that can help us accomplish our goals.