Biography of a Pork Chop: David Kirby’s Animal Factory, and the Not-So-Hidden Costs of Cheap Food 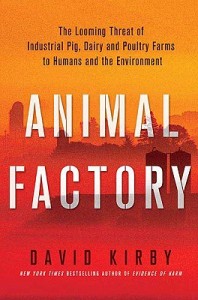 Here in Iowa we have an event called RAGBRAI – The Register’s Annual Great Bicycle Ride Across Iowa – the oldest, largest and longest non-competitive ride in the world.  Simply put, roughly 15,000 of us dip our back tires in the Missouri River one July Sunday Morning, then pedaling past the cities, fields and farms we dip our front tires in the Mississippi River 6 days later, having ridden an average of 465 miles.

When the ride started 38 years ago, riders rolled past countless fields dotted with little lean-to style huts – shelters for the hogs that have been raised here since the European settlers came in the early 1800s.  Since then, though, the huts have all but disappeared, replaced by long, narrow steel buildings with pairs of 6-foot exhaust fans on each end and large lagoons outside.

Now these are not lagoons like we used to see on Gilligan’s Island.  These would be more properly referred to as cesspools.  They are 1-acre and larger lakes of effluent from the Confined Animal Feeding Operations, or CAFOs, that have nearly taken over the entire livestock world.  The methane and ammonia fumes are gagging at the best of times.  When you’re pumping 70 miles on two wheels and need the extra oxygen, they can be asphyxiating.

This of course is a relatively minuscule side-effect of these industrial methods, and in his new book Animal Factory, author and investigative journalist David Kirby details the devastating impact these methods have had, and evidently will continue to have unless some drastic changes are made.  Rightfully ranking with books like Upton Sinclair’s muckraking exposé of turn of the 19th century meatpackers, The Jungle, and Eric Schlosser’s more recent look at our Fast Food Nation, Animal Factory reads like a suspense thriller.

We meet Rick Dove, a former US Marine JAG Corps Attorney and avid fisherman in North Carolina who finds himself waging a very personal war with CAFO operators when their leaking and rupturing lagoons poison his beloved Neuse River and lead directly to his son’s death.  We meet Helen Reddout of the Yakima Valley in Washington, who wanted to go all Howard Beale but dared not open the window for fear of the stench from nearby dairy confinements.  And we meet Karen Hudson in Elmwood, Illinois, as she watches brother turn against brother over the construction of another dairy confinement, only to see her worst nightmares of pollution from ruptured lagoons come to pass.

Readers scarcely need glance past the introduction to see the impacts of these methods, the until-now hidden costs of taxpayer-subsidized cheap industrial food.   Kirby points out that CAFOs in the US yield 100 times more waste that all US human sewage treatment plants.  None of the animal waste is treated, as the human waste is to kill pathogens.  It is simply sprayed onto cropland, often while it is frozen and often with no regard to nearby waterways.  It contains pathogens, antibiotics, drug-resistant bacteria, hormones and heavy metals.

If these farms were made to bear these true costs of their methods, they would be rendered economically unfeasible.  But instead they are party to lax regulation and subsidized feed, without some much as a nod toward the future implications of their actions.

Karen Hudson is optimistic though.  She thinks “The CAFO industry has lost the public relations game.”

Rick Dove doesn’t see it that way. “I feel sorry for all the innocent souls who will be consumed in the fury of this storm,” he said of the looming environmental catastrophe, “but I don’t feel a bit sorry for the swine barons.  They shall reap what they have sowed.”