What I Learned at Michelle Obama’s Historic Obesity Summit 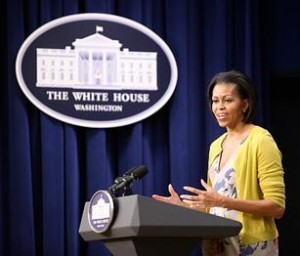 When President Obama established a “Presidential task force on childhood obesity” in February, Grist’s Tom Laskawy wondered whether our nation’s first federal food policy council had quietly sprung into being. In a food policy council, the key stakeholders of a region’s food system come together to assess the current food situation and envision ways it might be improved. Food policy councils are a growing phenomenon at the state and municipal level, but such a thing had never existed before at the national level. Does it now?

Well, last week I had the honor of attending the new task force’s White House Childhood Obesity Summit,  and it certainly had the flavors of a food policy council: an array of food-policy players across agencies gathered to discuss a key symptom of a food system gone off the rails: childhood obesity.

The task force was charged with developing and submitting to the President in 90 days an interagency plan that “details a coordinated strategy, identifies key benchmarks, and outlines an action plan.” As part of the First Lady’s Let’s Move! campaign, the task force is engaging both public and private sectors with the primary goal of helping children become more active and eat healthier within a generation, so that children born today will reach adulthood at a healthy weight.

Feeding our children well may seem at first glance like a softball issue for the first lady, but Mrs. Obama is actually in the opening innings of what looks like a long and complicated fight. As Time put it:

If this sounds like a political fight, well, it is. Michelle Obama may be tilling nonpartisan ground with her vegetable garden and child-obesity program, but food has long been political. From soda taxes to corn subsidies, food is about health care costs, environmentalism, education, agriculture and class.

The lead pitcher to Let’s Move!, Michelle Obama, provided the welcoming remarks for this historic event. She declared:  “This gathering has never happened before at the White House. It’s one where we’re bringing together teachers and child advocates, doctors and nurses, business leaders, public servants, researchers and health experts to talk about one of the most serious and difficult problems facing our kids today, and that is the epidemic of childhood obesity in this country.”

After Mrs. Obama made brief welcoming remarks, Barnes, the domestic-policy advisor, took over. Barnes chairs the obesity task force, and said it was time for “all hands on deck” as the task force focuses on its report for the President.

Joining the ranks of the 75 students who are Michelle Obama’s most critical stakeholders in her Let’s Move! campaign, I was fortunate enough to be on deck and participate as a representative for the National Farm to School Network at this meeting and make the point that connecting schools to their surrounding farmers is critical; it advances all four of the objectives laid out by the Administration:

(a) Ensuring access to healthy, affordable food;
(b) Increasing physical activity in schools and communities;
(c) Providing healthier food in schools; and
(d) Empowering parents with information and tools to make good choices for themselves and their families.

Four break-out groups convened separately for the topics a-d above, and we were tasked with identifying 3 to 5 of the best ideas to present to the writers of the roadmap to a healthier generation. I was assigned to Kevin Concannon’s breakout: using schools for improving nutrition for American children. We were asked to consider the nutritional quality of school meals, necessary changes to the school environment, and infrastructure that would lead to key benchmarks and actions.

Our group dove right into lively discussion with two enthusiastic food service directors, Tony Geraci of Baltimore City Schools, and Tim Cipriano of New Haven Public Schools, showcasing what does work: farm to school. In sum, the recommendations coming out of our group included:

1) Need for strong national standards for ALL food in schools: meals, snacks, competitive, etc.
2) Enhance and ramp up professional training for all those involved in putting food on the tray: food service, custodians, and all adults in the school
3) Rethink business of meal production and its delivery: kids involved in preparing food, local procurement, schools gardens, etc. Find funding for this. We need to rethink the business of meal production and its delivery with programs such as Farm to School. Some of the most fortunate schools have gardens and Farm to School programs. We need to break down the myths of USDA regulations: it is ok to source locally and it is ok to have a garden. The CNR includes funding for Farm to School nationally.”
4) Nutrition education needs to happen across all classrooms (again citing farm to school)–classroom for nutrition education, but also using cafeteria as educational opportunity for a teachable moment
5) Integrate incentives to make positive change happen

We then re-convened with the full gathering and shared our small-group results. My full notes are available here (PDF).

I left with Michelle Obama’s concluding words running through my head: “What we have done is start a national conversation. But we need your help to propel that conversation into a national response.”

This administration has continually opened doors for civil society participation in the discourse of creating a healthier generation. There was an opportunity for public comment, a kid-only Town Hall at the White House, and this child obesity meeting at the White House. Do you have something to tell the President’s Task Force on Childhood Obesity? Build more playgrounds? Reform school lunch? if so, send your comments to LetsMove[at]who[dot]eop[dot]gov.

When I returned from 1600 Pennsylvania Ave, I received this message from my sister, a mother of three, who juggles a full time job and a family calendar of activities that makes your eyes glaze over: “In honor of you today fighting childhood obesity, I’ll make sure Grant eats an apple and plays outside before we let him on the Wii.” If all parents would make that commitment, Michelle Obama would be one step closer to succeeding in the goal of her Let’s Move! initiative.