Watch Food, Inc. on PBS Next Week, and Make it a Potluck | Civil Eats

Watch Food, Inc. on PBS Next Week, and Make it a Potluck 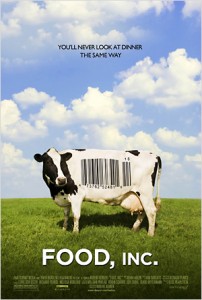 It has often been said that the reason television is called a medium is because it is neither rare nor well done.  For forty years, PBS has been defying that axiom, consistently providing some of the best television on television.  They also have the only serious nightly news show left.

Possibly the best thing they offer is POV, the easiest way to see serious documentaries by strong filmmakers unless you are a obsessive film junkie with scads of time on your hands and you live in New York or LA.  Even for a show as impressive as POV though, their plans for April 21st are unique.

In conjunction with the showing of Robert Kenner’s Oscar-nominated film Food, Inc. (trailer) that day, POV is helping to organize potlucks in people’s homes all across the country.  The idea is to get groups to share a healthy, sustainably-sourced meal, watch the film, and discuss – thus helping to spread the gospel of real food.

For the convenience of those with scheduling troubles, these potlucks don’t even need to be that evening when the movie will be on PBS stations nationwide.  For one week afterward, it will be available free, streaming on their website.  The site points out that “Some of the scenes in Food, Inc. may be, shall we say, unappetizing to you and your guests,” so you should eat first, then watch.

Odds are that somebody somewhere is going to be upset about this though.  Like all the doc’s on POV, Food, Inc. takes a stand, and it’s a stand that is not particularly appreciated by Big Ag, least of all the folks just up the road from me here at the “Supermarket to the World.”  Archer Daniels Midland has been an underwriter of PBS for many years, often to the tune of $1M or more.

I will be very curious to see how they react.  Michael Pollan, a producer and narrator for the film, has been confronted numerous times at his public appearances by the Farm Bureau and other Industrial Ag proponents, in some cases threatening to get corporate funding pulled from colleges that invite him to speak.  This despite their lack of cooperation in making the film (Kenner invited many of them repeatedly to go on camera), and despite their inability to effectively refute even one of the facts laid out in the film.

The sustainable food movement as a whole has been getting the attention of the Food Barons a lot lately, such as Monsanto, Tyson, Smithfield, the Farm Bureau and the NRA (That’s Restaurant, not Rifle – it’s larger and to the right of that other NRA).  That’s because of films like Food, Inc., books like Omnivore’s Dilemma, TV shows like Jamie Oliver’s Food Revolution, companies like Edible Communities, and organizations like Slow Food. As they take these issues out of the foodie fringe and into the mainstream, these moneyed special interests are beginning to fear for their bottom lines just a little bit.  But persistence overcomes all, and as Ghandi once said, “First they ignore you, then they laugh at you, then they fight you, and then you win.”

The ensuing shouts from Agri-Chemical companies and Big Beef notwithstanding, POV’s potluck idea is an innovative way to draw their viewers into the conversation while increasing awareness of the issues.  Participants will learn a little bit more about their food and their community simply by making a casserole or a salad or a pie from local, seasonal, sustainable ingredients.  Think of it as old-fashioned activism with a hot dish to share.