Organic Is Not Marketing Hype (VIDEO) 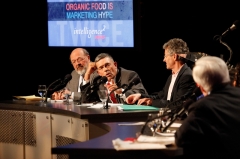 Asked whether organic is marketing hype, the audience in attendance at the Intelligence Squared April 13th debate in New York City, voted against the claim, 69% to 21% in favor of it. The remaining 10% were undecided by the end of the evening.

Six panelists debated the merits of conventional agriculture versus organic agriculture. Speaking against organic, John Krebs, former chairman of the Food Standards Agency in the UK, Dennis Avery, director of the Hudson Institute’s Center for Global Justice Issues and Blake Hurst, a Missouri farmer and food writer most well known for his article “The Omnivore’s Delusion,” challenged the notion that organic food is more healthful than conventional farming. They also asserted that organic food production cannot end world hunger, when the cost for organic is too expensive to make it accessible to all economic backgrounds.

On behalf of organic, food writer, Jeffrey Steingarten, director of Technical Policy for Consumers Union, Urvashi Rangan, and chief scientist of The Organic Center, Charles Benbrook, argued that organic is indeed a healthier practice for the earth, which in turn, proves to be a better solution for raising animals and providing healthier production of food for humans.

The tone of the debate was “bitterly partisan,” as stated by ABC News Nightline correspondent and the Intelligence Squared monitor, John Donovan. But politics aside, when we ask the question “Is Organic Marketing Hype,” we need to address the market—organic or conventional—to question whether big agriculture food companies are focusing on sustainable measures at their core.

Without effectively addressing the market, the opposing sides did form pro-consumer arguments. For conventional, John Krebs spoke to science and statistics, claiming that organic has no proven nutritional benefit. His mention of pesticides—that there is no evidence that the small amounts found in food products are harmful—furthered Blake Hurst’s support of big agriculture as the world’s solution to hunger. Calling the organic movement elitist and fashionable, Hurst relayed a cynical image of the organic consumer: “Organic food is fashionable, cool, an attitude, a chance to identify yourself with beautiful actresses instead of old farmers in overalls.  But mostly, organic food is marketing hype.” His argument for higher yields was seconded by Avery’s call for agricultural expansion in the face of a quickly growing population.

Pro-consumer arguments for organic called for verification of standards, ultimately defining organic by what conventional farming is not: a practice free of fecal matter in feed, free of antibiotics, free of sewage sludge, and free of synthetic pesticide use. Steingarten furthered organic support by stating that “To say that organic agriculture could never feed the world is sidestepping the fact that…conventional agriculture is not feeding the world.” But how do we judge these claims? How does a consumer evaluate and quantify misleading information? Benbrook returned to the cause of the organic movement to answer this question: we must advocate for and study a system that has the health of the earth as its founding principle. The direct relation to the health and care of livestock and humans naturally follows. Consider that biodiversity, a farming method that produces a variety of crops on a single plot of land, involves many farm hands and help of livestock to naturally fertilize acres and keep the soil healthy, argued Benbrook.

Rangan effectively touched upon the debate’s focus when she stated in her closing argument that the night’s resolution was not about yield or hunger but rather the question of hype surrounding organic farming production:

For the majority of the audience, statements like this one proved convincing enough to vote yes for the legitimacy of organic. But healthful food is not just about organic versus conventional on the industrial level. We’re debating large-scale versus small-scale, local exchange versus global trade, food waste, food access and a variety of other measures that demand that we rethink how best to use our resources for the benefit of the earth and the creatures living on it. Our conversation about agriculture cannot just be rooted in extreme language of “good or bad,” “hype or truth.” When we critically analyze the larger food system and the problems with it, we must look beyond regulatory terms to question the motives and pitfalls of industrial agriculture.

On Monday, April 19th at 9pm, Bloomberg TV will re-broadcast the debate, along with hundreds of NPR stations. Watch the entire debate below:

ORGANIC FOOD IS MARKETING HYPE from Intelligence Squared US on Vimeo.