The Dirt Diva Dishes About Her New Book, Talking Dirt 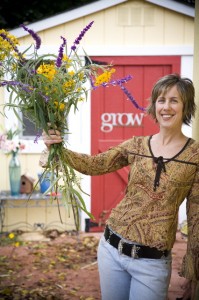 Syndicated eco-columnist and Master Gardener Annie Spiegelman (AKA “The Dirt Diva”) offers practical tips on organic gardening, composting and planting along with guidance and gripes on marriage, motherhood and “having it all.” A cynically optimistic horticulturist, Spiegelman offers positive reinforcement and moral support as a gardener who’s made all the mistakes, and has lived to tell how to make peace with snails, fungi, bacteria (and your boyfriend). Civil Eats caught up with the Dirt Diva to dish about her new book, Talking Dirt: The Dirt Diva’s Down-to-Earth Guide to Organic Gardening.

CIVIL EATS: You’re a master gardener, garden columnist and gardening author. Is it true you started out in the movie business in Manhattan as a production assistant on the movie Staying Alive?

ANNIE SPIEGELMAN: Yes and I’m proud to say that I was hired as a “parking” PA. I watched parking spaces all day and night while Sylvester Stallone was directing.  I was so good at it that I got hired on my next movie, Moscow on the Hudson, with Robin Williams. I was hired as “assistant to the Craft Service person.” Basically I was the low man on the totem pole. I was the garbage girl. Now I work as a First Assistant Director in film production and write gardening books. I spend my days dodging bullets from the maniacal movie industry and the demanding publishing world, and I rarely take medication.

CE: Why this book on organic gardening?

AS: It’s different than other gardening books because I was a really bad gardener and then I slowly evolved into a very good gardener. I was raised and hardened in New York City and thought that flowers simply came from the flower shop on 86th and Lexington. When I moved to California in my 20s I was introduced to my first garden. I watered the weeds thinking they were flowers and polluted the entire zip code with chemical fertilizer and pesticides until the soil had not one nutrient left in it. It wasn’t soil anymore. Soil is alive. It was dirt. Dirt is dead. Nothing grows in dirt. Since I became a Master Gardener and got rid of the old garden chemicals sitting in my shed, I fertilize with compost religiously. I now have healthy, happy soil. If I can do this, trust me, anyone can.

CE: What is the one thing you hope readers will appreciate about organic gardening after reading the book? 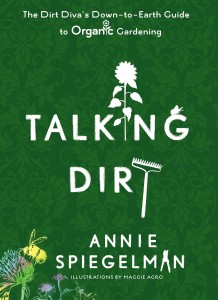 AS: That gardening with chemical fertilizers and toxic pesticides is old school. That should have gone out with Beatle-bangs and B&W TV’s with aluminum foil on the antenna. Some pesticides have saved us throughout history but now it’s overkill. Since we’ve been marketed to death for the last 50 years, farmers and homeowners are now hooked on synthetic fertilizers and pesticides instead of learning the basics about soil; just one tablespoon of soil can contain up to 10 billion microbes—that’s one and a half times the human population. These microorganisms breakdown organic material for us for free and feed our plants (for free!). Many chemical fertilizers and pesticides destroy the life in the soil. They pollute and deplete the land without giving anything back to Mother Earth. Organic gardening is working with Mother Nature, not against her. We take and we give back. Organic gardening is about creating a safe, healthy, long term and symbiotic relationship with the land. Not hit and run, or a one-night stand.

CE: What about your book will surprise your readers?

AS: That American agriculture uses 1.2 billion pounds of pesticides annually; that’s about 4 pounds per every man, woman and child. Here in the Bay Area, where we’re supposedly a bunch of iPhone-toting treehuggers, every single creek is contaminated with high levels of pesticides, especially Diazinon, a pesticide that was banned for home use almost 10 years ago because of its toxicity to mammals. If our waterways in California are so polluted, it’s frightening to think what’s in the water in other states where environmental laws aren’t as stringent. Enough with the chemicals before we all end up in the wacky shack! Mostly, I want to do this for my son. If we don’t clean up our act environmentally, the next generation will think their parents were so lame.

CE: Why aren’t you a fan of the lawn?

AS: As my soil scientist pal, Professor Stephen Andrews at UC Berkeley, says, “If you’re growing a lawn in California, God help you!” We have no water to waste on lawns in California. The water department’s new slogan is “Brown is the new green.” They’re asking homeowners to stop watering their lawns in the summer. (I promise they will come back to life with the winter rains.) Not only are lawns a pollinator’s (birds, honeybees, beneficial insects) desert, but they’re also giant pesticide guzzlers. They consume 90 million pounds of pesticides and herbicides annually. For a piece of turf! In the 1940s, the government asked its citizens to grow victory gardens to help feed the country. There were 250 victory garden plots in Golden Gate Park alone. Then came the 1950s; suburbia, gigantic front and back lawns, DDT spray trucks, chemical fertilizer dependence and the beginning of fast food restaurants. I took out my front lawn a few years ago. I planted natives and drought tolerant plants and I’ve never been happier. For more on organic lawn care or to get rid of your cranky, rusty lawn, visit: http://www.safelawns.org and http://www.lawnreform.org.

AS: Wherever you live, before planting vegetables or fruit, find an area that receives 6-8 hours of sun. (Leafy vegetables can be happy with less sunlight, 4-6 hours.) If this is a new plot of soil that has never been amended, you might want to do a soil test first. This will tell you the pH of your soil. Most vegetables grow best in a ph of 6-7, which is a bit on the acidic side. You can find a simple soil test kit at your local plant nursery. Your new mantra should be “compost, compost, compost.” Compost will slowly feed your plants and retain water as well. A thin layer of mulch (leaves, straw) on top of that will keep your crops warm in the early spring and cool in the summer. If you’re not using compost in your yard, I’d rather you don’t garden at all. Try knitting or namedropping instead. Plant some herbs and flowers such as nasturtium, Shasta daisy and yarrow, nearby your food. This will help to invite beneficial bugs to eat up any pests that come to visit your crops. Be prepared to be a doting parent. Growing vegetables requires patience and attention. Keep an eye out for pests and make sure you’re watering consistently. Using drip irrigation is best. If all else fails, go support your local organic farmer at the farmers’ market who works to hard 24/7 to grow healthy, safe food for you and your family.

AS: To see compost bins in every backyard and in every community, instead of overfilled landfills spewing out methane like it’s going out of business. There’s always a wild garden party going on in a compost pile. And, to get those kids off of screens and outside learning how to grow their own food and flowers. I want to help create organic school gardens in every school in America!