Moby Gets to the Gristle of the Matter | Civil Eats

Moby Gets to the Gristle of the Matter 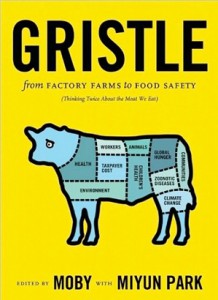 What do most of us know about Moby (not the whale, but the music artist)? I, for one, know that he makes good dance music, he likes tea, and he’s an outspoken vegan.  So how did he end up editing a book with a contribution by Paul Willis, Mr. sustainable hog farmer? And did they drink not-too-sweet organic peach tea to seal the deal? It seems like food politics may have made some super strange bedfellows here.

We are at an interesting moment, I think, one in which the vegans are trying a new tact. Sensing a possible ally, they have decided to team up with the sustainable food movement in order to improve animal welfare and decrease the number of animals suffering at the hands of Big Ag. It’s a pretty darn good match.  After reading Gristle: From Factory Farms to Food Safety, composed of 15 pieces on the negative environmental, health, community, financial and global impacts of industrial animal production, it’s hard not to feel that you must opt out of the system entirely.  For some—like me—that means choosing to eat less meat and to be careful about where that meat comes from and how it is raised.  For others it’s going to mean giving up meat altogether.

Moby and Miyun Park, who has long worked on farm animal welfare issues, collected these 15 pieces and organized them by type of impact (e.g. health; worker rights; climate change) to create a kind of primer.  They gathered a quirky assortment of contributors—determined perhaps by six degrees of Moby?—including food movement warriors like Frances Moore Lappé, Danielle Nierenberg and Meredith Niles to talk about global and environmental impacts; love-him-or-hate-him Whole Foods CEO John Mackey to talk about the true, hidden costs of cheap meat; Canadian ultra-Marathoner Brendan Brazier to talk about being a powerfully capable athlete living only on plant protein, and the bodily health that comes from skipping all those antibiotics and growth hormones.

The takeaway at the end of the read is disgust at a system of food production that could be failing humans, the physical environment and animals so comprehensively. The vegan handbag/shoe designer and the pork producer can agree upon this, as can any reader with a conscience and a heart.