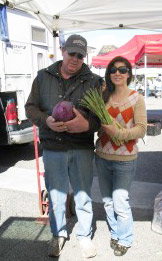 When Nona Lim and Jennifer Tuck of Cook! San Francisco set out to plan, gather, and prepare the food for the Plastiki expedition, they had no small task ahead of them. In fact, planning and sourcing meals for six people at $15 a day for an 11,000-mile trip from San Francisco to Sydney was a voyage in and of itself.

Near the end of last year, Lim and Tuck responded to a call from Jo Royle, the skipper on the Plastiki, Adventure Ecology’s catamaran made from 12,000 post-consumer plastic bottles made in part to document the Eastern Pacific Garbage Patch. Royle wanted an alternative to the pre-packed meals that sailors often take on such trips. “She described long journeys where she’d live for months on freeze-dried food and the ill consequence that has on the body,” recalls Tuck.

The pair — and the crew of chefs that Nona employs to prepare the ready-made meals she sells through Cook! San Francisco — were up for the challenge. “We wanted to provide something healthy and flavorful over a three–month period, which is pretty tough,” says Lim. And, seeing as how the Plastiki expedition is focused on sustainability, Lim and Tuck decided it would be a great opportunity to incorporate as much local, Bay Area-produced food as possible. The answer, they soon realized, would be to prepare meals based largely on home-canned stewed meat and dehydrated vegetables. They added a pressure cooker to the equation, collected and developed recipes (including quite a few by pressure cooker expert Lorna Sass), and set about making it happen.

That’s where Everything Under the Sun’s Bill Crepps, a farmer known for his wide range of dehydrated products, entered the picture. When Tuck approached him with a list of ideas, Bill saw it as an opportunity to try out some new things. “Finding Bill was a dream come true,” she says. “He was willing to dehydrate any and all veggies he could get his hands on – and the experimentation began!”

“She would tell me what she needed; if I had it I’d dry it for her,” recalls Bill. “If I didn’t, I’d find someone who did. That’s how Dirty Girl Produce got involved—with carrots and beets—and Eatwell Farm with leeks.” Once dehydrated, most of the produce weighed around one tenth of what it had fresh; for instance, 20 pounds of fresh carrots became a mere two boat-friendly pounds of dried carrots. Crepps also experimented with olive oil and salt to create chips with vegetables like kale, eggplant, and cilantro (his personal favorite). And with the help of some regular customers, put together a Plastiki-inspired soup mix that combines his kale, onions, garlic, and peppers for his every-day shoppers who want an easy way to flavor beans or broth-based soups.

“The crew were the guinea pigs for a lot of stuff I hadn’t dried before,” says Bill, who tends to dehydrate things like apricots, mandarins, and tomatoes. He ended up donating a portion of the food (such as a big batch of summer squash he’d dried last summer) and selling a great deal of it at cost. In return, he says the effort reinforced the fact that he could dehydrate fresh produce that doesn’t sell year-round, and market it to backpackers and others who need a nutritious alternative to the pre-packed meals sold in stores like REI.

As for meat, Tuck and Lim ordered more than a hundred pounds of organic grass-fed lamb and beef from Marin Sun Farms (with the goal of providing seven to eight ounces of meat per person, per day). In the Cook! SF kitchen, they canned 110 quart-sized mason jars full of beef bourguignon, lamb ragout, Thai chicken curry, lamb tagine, and some additional meat in stock for the crew to use in their own recipes. “We had four pressure cookers that each fit four mason jars that had to cook an hour and a half in order to properly preserve the meats. If you do the math, we were in the kitchen many, many hours.” The crew was also given back-up jerky and other forms of preserved meat from sources like Fatted Calf, in case the canned meat doesn’t hold up in tropical temperatures. (See a video of Jo Royle preparing Beef Bourguignon on the boat.) 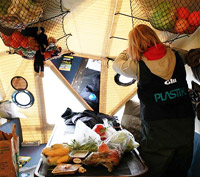 The Plastiki left Sausalito on March 2, with an initial supply of fresh fruits and vegetables (see their kitchen at right), but have been transitioning to the preserved food over the last week. There is also a small hydroponic garden on board the ship, which will provide occasional fresh greens for the six crew members. And. of course, they enjoy occasional fish when they can catch them. (To date they have only caught one tuna and hope to call attention to diminished fish populations while on their journey.)

In a recent email from onboard the ship, where the crew regularly blogs and shoots footage for a film about the voyage, Royle discussed her efforts in the boat’s kitchen. “I am trying to move the guys away from simply opening the yummy Cook! SF canned food to experimenting with the dried. I made Lorna [Sass]’s veggie bean chili — and adapted it a little to include lots of Bill’s vegetables. It was sooo good.”

Before the boat launched, David de Rothschild, the founder of Adventure Ecology and the Plastiki expedition leader, also commented on the community-wide effort to stock the vessel with local food. He wrote: “The Plastiki has [been] exposed to many diverse, curious, passionate and incredibly generous individuals and none more so than the committed and diverse group of organic farmers and local suppliers who have not only overwhelmed the team and myself with their carefully crafted meals, snacks ands treats but they have also deeply inspired me with their unrivalled commitment to authenticity, quality and community spirit.”