A lecture at the University of California, Berkeley by Gastronomica editor in chief Darra Goldstein was just the ticket I needed to transport me into the scholarly world of food and ideas.

Goldstein, in town to attend a couple of Gastronomica-related events timed for the publication’s 10th anniversary, was new to me, as was the journal she founded.

Published quarterly by UC Press, the elegant (and exxy, at $13 a pop) magazine melds food and culture in an eclectic mix of scholarly essays, fiction, poetry, and arresting visuals. 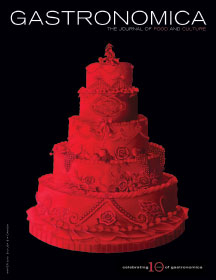 Gastronomica is a place, says Goldstein, to examine both the deeper and darker sides of food, and use food for thought to provoke readers to seriously contemplate what goes on their plate. But it’s not heavy handed: Goldstein knows how to play and have fun with her food too.

In the past the journal has covered parrot-eating in the Renaissance, the cultural ramifications of the Atkins diet, genetically modified foods in Zambia, the ethics of eating apes, and the eating habits of hefty sumo wrestlers in Japan. Quirky, even eccentric, stuff.

When Goldstein isn’t polishing manuscripts she teaches Russian history at Williams College in Massachusetts. She’s lived in Russia, studied in Helsinki, and traveled all over the globe pursuing her professorial and personal inquiry into food. Oh, and she’s written four cookbooks, won awards, and researched the culinary origins of cutlery, too. 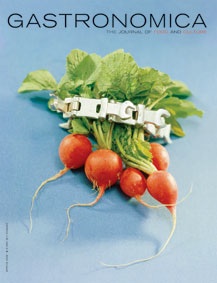 My colleague Dianne Jacobs, who first brought this discussion to my attention, says she wants to BE Darra Goldstein. (You can find her take on the talk here, pink bathrobe and all. Pink? Not what I would have pictured.)

I’d settle with having Darra as a brilliant best friend. Over the course of a couple of hours she covered a lot of ground, geographically and intellectually, regarding food, culture, and identity, in conversation with sociology professor Barry Glassner, author of The Gospel of Food: Why We Should Stop Worrying and Enjoy What We Eat.

What I loved most, and helped me see beyond my own front door, was Goldstein’s take on topics where I felt sure I knew what she was going to say and yet, each and every time, she surprised me.

There was talk, too, of Adam Gopnik’s recent New Yorker piece on the French phenomenon Le Fooding, which Gopnik didn’t seem to understand so it was a bit lost on me (I read the article post event). Still, it was a fascinating peek into the French food world’s psyche nonetheless.

Also a nod to Corby Kummer’s story in The Atlantic, The Great Grocery Smackdown, which asks whether — gasp! — Walmart and not Whole Foods can save the small farm and make Americans healthy. Can you guess what conclusions he comes to?

Quite a lot to digest during a scant two hours, over lunch, no less.

I left the event with a full belly and brain, grateful to live in this Gown Town, and thankful to Goldstein for taking me on an international, educational, epicurean tour, just five minutes from home.