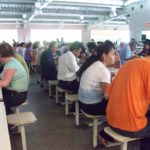 Belo Horizonte is the stuff of food security legend. BH (pronounced beh-agah), as it is known by locals, has been on the radar of food systems folks since their innovative programming began in the early 90s, and their recognition has only grown over time. Attention has come in the form of shoutouts by the Lappe mother-daughter team in Hope’s Edge: The Next Diet for a Small Planet, the Huffington Post and Yes! Magazine and the 2009 Future Policy Award from the World Future Council, to name a few. As topics relating to food security and the future of agriculture rise on the government priority lists and health-related NGOs, more and more eyes turn towards BH for best practices. So it was with nearly four years of built-up anticipation that I arrived in BH for a whirlwind tour of all things food and ag.

BH is Brazil’s third largest city. With nearly three million residents in the city proper, and nearly double that in the metropolitan area (which includes the city’s vast stretch of favela-like communities). But staring out the window of the bus only an hour before entering the city, one would never know a metropolis was just around the corner. BH is situated in central Minas Gerais, a state that earned its place on the map when the Portuguese discovered gold here early in Brazil’s colonial period. Mining (“minas” is Portuguese for mines) brought massive wealth to this vast stretch of verdant, breathtakingly beautiful land with its ever-rolling hills, waterfalls, and semi-tropical vegetation. As the mining industry grew, the state became one of Brazil’s wealthiest, and between the mining industry and the ideal growing climate, Minas came into its own with splendor and grace.

Long story short, the mining boom didn’t last forever (it never does). And although mining still remains an important economic activity here in Minas Gerais, it is nowhere near as central to the state’s economy as it was back in the good ‘ole days. But before the massive decline ensued, the mine-owners needed labor. And labor they brought. Over time, their workers ranged from African slaves to native Indio peoples from Amazonas to, more recently, internal migrants (from a number of ethnic backgrounds) seeking higher wages and a better life.

Today, the purpose-built capitol of BH struggles tremendously with ever-growing migrant communities. With the decline of mining, many laborers have found themselves out of work. In addition, Brazil’s tumultuous land-use situation has pushed many off subsistence plots, thus stripping farmers of their livelihoods. And, as the story goes worldwide, millions of these displaced, out-of-work folks have moved towards urban centers in search of work and educational opportunities for their children.

But the differences between BH and other rapidly-growing cities cannot be underestimated, and thus lies the nugget of gold that brought me to this food security mecca. In 1993, puzzling over what to do about skyrocketing food prices (and all the subsequent health problems), a growing poor population, and a loss of marketing opportunities for rural farmers, BH had the brilliant idea to centralize, in one municipal department, the Belo Horizonte Secretariat for Food Policy and Supply [PDF] (SMAAB in Portuguese). This department governs all the programs that deal, even tangentially, with food access, nutrition, and producer livelihood. What has unfolded over the past 17 years seems to be simultaneously “keep it simple, stupid” obvious and remarkably and bravely innovative.

The core tenants of SMAAB’s work are clear: food is a human right, not a commodity; everyone should be able to access and afford to eat healthy, nutritious food; nutrition is a vital component of public and personal health; and producers of food deserve fair marketing opportunities and wages. From those basic principles emerged a system of integrative planning and programmatic implementation that includes (ready? this is the bona fide bulletpoint list from the government of BH): direct marketing, warehouse marketing, organic markets, community and school gardens and orchards, central municipal supply, popular markets, a market district, food and nutrition education, courses for food handlers, food banks, food assistance programs, a free and fair trade model, research baskets, school food policies, popular restaurants, planting in alternative spaces, training agricultural workers (both urban and rural), supply for retail shops, and, to keep all the number-hungry politicos and grant-makers happy, the research-oriented Center for Information and Documentation.

As if this weren’t enough, BH has been blessed with a number of NGOs working on food, agriculture, and health issues on the community level. One such group, REDE de Intercambio de Tecnologias Alternativas (The Network for Exchange of Alternative Technologies), a non-profit that works at the household and community level to empower, educate, and train low-income BH residents in techniques to improve their health, environment, and quality of life. Their programs and accomplishments are too numerous to list here, but suffice it to say, they are a small but very busy team, and I have seldom stumbled across such savvy, engaged, progressive, and hard-working activists.

I could go into extensive detail about the workings of these programs, but instead I suggest you check out the Future Policy Award brochure, read the Lappes’ accounts, and peruse (with the help of a translator) REDE’s website. What I want to focus on is the stories I heard and the sights I saw, as for me, that’s where the proof of true success lies.

With city government representatives, I first visited a small organic market stand on a busy neighborhood corner. This particular producer (who we’ll call Joao) and his wife come three times a week to three different stall locations from their home 40k outside the city bearing bushel upon bushel of fruits, grains, vegetables, and preserves. Most of these they grow themselves, some they trade for with other organic producers in their community to diversify their market offerings. We arrived at 10:30 a.m. and they were almost entirely sold out. Empty crates sat piled by their truck, in preparation for the early afternoon trip home. While chatting over the benefits of having such marketing opportunities, Joao told me that they have been able to make plenty to live off of from their large garden alone. But he was careful to emphasize that the best part about the city marketing opportunity was the relationships he and his wife had formed. Nearly all of their customers are regulars, and they have adapted their production to accomodate local demands. Many city residents have standing orders which Joao and his wife keep on reserve until they can be picked up. When a regular customer is sick, they make local deliveries. And once, when their truck broke down en route into the city and the stall wasn’t set up, Joao told me he received nearly thirty phone calls from anxious customers wondering what had happened. I can relate, as working at farmers markets and in CSA sheds has always been the highlight of my ag-related jobs. To me, the best part of working with food and agriculture is the creation of these strong human bonds.

Next we headed to another BH neighborhood to visit another market stall. This particular producer (we’ll call him Ailton) and his wife (and, we’ll call her Carla) come twice a week to set up a sprawling display of gorgeous greens. For the first time since arriving in Brazil, I saw the likes of mizuna, artichokes, bok choy, and cherry tomatoes. This couple revels in the art of cultivating unusual crops, as expressed by Carla as she waxed poetic over the sublime flavor of her spicy greens and the beauty of their Italian artichoke varieties. And their customers reveal just as much glee from snatching them up. Carla and Ailton were originally courted by a local gym (of which there are a surprising number here in Brazil, and a particularly high concentration in BH) to serve health-conscious people in their post-workout shop. But in the years since then, local families and a handful of chefs have started to frequent the stand as well. Carla and Ailton’s stall was also nearly empty by 11:30 in the morning, save for a few heads of lettuce. When I asked them if they needed to have any off-farm work to supplement their income, they laughed. The city markets have provided more than enough for their lifestyle, and they can’t imagine doing anything other than the work they so love.

Hungry after eyeing gorgeous producers all morning, we headed to one of the city’s Restaurantes Populares. These remarkable programs, which serve approximately 16,000 nutritious, regionally-sourced meals a day (three meals a day) for less than a dollar a pop. As I guiltily cut the line with my hosts, I noticed a line that wound around the corner, down the stairs, and into the parking lot. This program is indeed feeding people, and lots of them.

Sated, we headed out to the source, a third-generation eight-acre organic family farm about 50km outside of BH proper. Stephen, a strapping hulk of a young man, greeted us donning his Prefeitura BH (BH City Government) hat, an immediate sign of his feelings about the city’s work to improve agricultural technology and marketing opportunities. We spent the afternoon wandering his fields and hoophouses and chatting about his family. He and his three brothers grow nearly 30 varieties of fruits and vegetables for themselves and markets, and are now beginning to experiment with aquaponics. They have received technical assistance from city extension agents, helping them to make their land-use more efficient. Their production and marketing has been so successful in the past couple of years that they have been able to move off the farm to a house closer to the village, and have been able to purchase basic appliances and vehicles to improve their quality of life and that of their children. The process seems so simple, the goals so obvious. And yet, these are they types of programs we so struggle to initiate in the United States.

I spent the next day scouting neighborhood projects with REDE. From a small garden started on a formerly druglord-infested corner to an enormous school garden project (this is more like a school jungle, complete with terracing and a shaded hoophouse for crops that can’t stand the midday Brazilian sun). We ended the evening sitting in a backyard garden REDE had helped to plant. An old woman and her husband lovingly tended a chicken coop, three thriving orange trees, a vegetable patch, and banana and papaya groves. I was amazed by the sheer amount of food produced in this small space, and my friends at REDE helpfully explained to me that all their work is done with a focus on agro-ecology — a technique that considers environmental, human, and cultural health. We watched the sun set over the remarkably rural favela as we sat carving the peels off of perfectly ripe oranges, the delightfully tart juice dripping down our arms and chins, the perfect end to a hot day.

Belo Horizonte certainly hasn’t solved all their food-related problems (not that I can think of a city that has). But what so impressed me was the willingness to integrate, to share information, to bring new players into the fold, and most importantly, to demand attention for nutritious, affordable food as an absolute necessity. It seems to me, if all of us working in and around cities could integrate just a bit of BH’s model into our own work, we would be well on our way to a series of more just, sustainable, and — let’s get serious — delicious food systems.