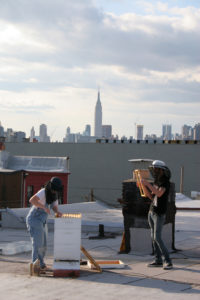 Until the New York City beekeeping ban was lifted on March 16th, city honeybees were categorized under Section 161.01 of the New York City Health Code as “venomous insects.” But these “wild animals,” as classified by code, are actually quite different from their wasp, yellow jacket, and hornet relatives. Domesticated for their passive nature, honeybees are vegetarians that eat the same honey coveted by humans. Now a sanctioned right, beekeeping on rooftops provides supplemental income to keepers, but even a small yield provides a hobbyist with enough incentive to foster a colony.

For Megan Paska, a Brooklynite who is expanding honey-making production on her rooftop and at collaborative local farms, curiosity about keeping bees evolved from other hobbies. An enthusiastic gardener and home brewer, Paska first tasted homemade tulip poplar honey in the form of mead (honey wine) from a beekeeper. She took a class on beekeeping, tended her own garden, and learned how crucial pollination is to the growth and biodiversity of crops. She now sells a modest amount of honey to neighborhood food shops and online.

But at heart, Paska is a hobbyist who takes pleasure from maintaining a productive, healthy hive. “When I attended my first beekeeping class,” she recalls, “Colony Collapse Disorder hadn’t yet become something that people were really talking about.” Although the number of reported colony disappearances significantly decreased in 2009, Paska still finds satisfaction in sustaining a species that benefits from her support.

Of course, the human hand is no substitution for the work that bees do for us. Bee pollination, a vital factor of plant fertilization, cannot be measured merely in honey jars.

It is estimated that one-third of our food supply is dependent on insect pollination for which bees handle most of the labor. Garden vegetables (broccoli, cucumbers, strawberries) need bees’ attention, as does large-scale production of stone-fruits, vegetables and nuts in places like the San Joaquin Valley, CA, where insects pollinate vast orchards. In dollars, bees’ value reaches into the billions for commercial plant and crop growth. But the life of a bee is crucial beyond dollar signs — its work is crucial to our ecological order.

Deborah Greig, agriculture coordinator at East New York Farms, instructs both children and community members about the importance of pollination in nature’s larger order. Greig teaches her students about the connection between the fertilization of plants and the food we eat. Beekeeping is her educational tool. Mastering the skill also empowers community members to participate in their local farmer’s markets where they can promote a product to sell. More than 600 community gardens and urban farms [PDF] in New York City depend on bee pollination. By keeping the city’s plant populations alive, bees also contribute to securing a larger, more diverse food supply for other animals and insects.

The start-up costs for an apiary are significant, since its materials and tools cost anywhere between $250-500; a colony of bees (45,000-70,000 insects) ranges from $60-90; and the device known as the extractor, a mechanism designed to centrifugally suck honey from a comb without injuring the complex and fragile frame, can cost as much as several thousand dollars. Ideally, a keeper would only have to buy one colony of bees over the course of one keeper’s lifetime, and because honey yields are entirely dependent on the efficiency of the hive, bees end up doing most of the legwork when it comes to production.

Honey is the purified version of nectar that bees collect from flowers and plants. The nectar mixes with enzymes in the nectar stomach of the bee and is deposited into the cells of a honeycomb, entirely constructed by the bees themselves. The honey-makers then fan their wings to evaporate excess water that allows them to cap their frame with a white layer of beeswax. To harvest, a human needs only to uncap the honeycomb, put the honey through an extractor, strain it, and then bottle the resulting liquid. During the bee season—mid-March through November—activity abounds in the hive. A good year allows for two harvests. During the remaining months, the colony stays nestled around its queen, eating stored honey and vibrating wing muscles to generate warmth.

A beehive can produce anywhere from 50-120 pounds of honey annually, depending on productivity levels. After rationing enough jars for oneself, a beekeeper may still produce enough honey for retail. Selling honey for profit depends on the cost benefits: an empty glass 8 oz. jar sells for $1-5, and farmer’s market sellers in the Brooklyn area price their products to be anywhere from $6-20. Greig bottles her yield and sells it for $6 at the East New York farmer’s market, catering to the demand of her consumer base who buys honey for medicinal purposes as well as sweetness. “We want to increase pollination and educate the community” Greig says, “but I think it could provide at least a few hundred dollars of supplementary income for an individual with one hive.”

For the estimated 600+ members of beekeeping associations throughout New York City and its boroughs, a supplementary income from the sale of honey is not enough of an incentive to keep the community strong. Partly about the “spirit of community,” as Paska sees it, and partly a leisure pursuit, beekeeping provides urban dwellers with an activity suited to their space. As apiaries are welcomed into city gardens, they may prove to help us understand urban agriculture—how we may work within the small spaces we are given to maximize our yields—and the importance of its most necessary elements: functionality, efficiency, productivity and cooperation.