Getting to Know the Invisible People Working in the Shadows 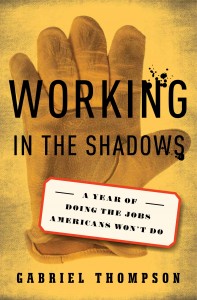 If you’ve ever wanted a look inside the lives of the invisible men and women, many immigrants, who toil at the hidden jobs that are essential to our economy, I’d recommend reading Gabriel Thompson’s Working in the Shadows (Nation Books 2010). These are the jobs all around us: in rural areas on roads rarely visited, and in large cities in the back rooms of the service industry. And they are crushingly hard on both the body and the spirit.

Author Gabriel Thompson spent a year working alongside these individuals and documenting his experiences doing the jobs they spend their lives doing. Writing the book was his attempt to open a door on these workers’ hopes, dreams, and daily trials. Along the way, he has illuminated the darkest corners of our economy, including our poultry processing plants, lettuce fields, restaurant kitchens, and luxury floral shops.

He’s also written a tribute; you might even call it a love letter, to the human beings who do jobs many of us could never imagine. Working in the Shadows gives the reader a peek into another world in the same way that Upton Sinclair’s 1906 classic, The Jungle, did. This world feels real, dangerous, and exhausting. Imagine a work life of crushing monotony punctuated by surprises entirely out of your control that can injure you, ruin you financially, take you away from your family, or even kill you.

The entire time I was reading the book I felt a more or less constant sense of dread. I kept wanting to look over my shoulder for “La Migra.” I found myself waiting for a surprised shout, followed by a thud as someone passed out from heat exhaustion in the lettuce field. At any moment, I expected screams and a spreading pool of blood as a sleepy graveyard shift worker nodded off on the “debone” line.

But none of these things actually happened in the book (though there were plenty of gruesome stories of past industrial accidents). Instead, I experienced the grinding monotony of long nights spent hand-tearing icy chicken breasts while enduring shouts of “Andalé!” every few moments from an incompetent supervisor named Debbie. My back ached and my brow dripped sweat right along with the lettuce pickers, and I harbored homicidal thoughts toward the arrogant customers getting food delivered to their Manhattan apartments.

Thompson’s prose is so vividly descriptive, even visceral, that it’s not an exaggeration to say I felt as if I were right there with him and the workers.

Consider this description of Thompson’s first night in the chicken plant:

“To my left is a chest-high cylinder filled to the brim with chicken bits; while it captures my attention, I step on what feels like a sponge and lift my foot to find a piece of pink meat, now flattened…as we cross the plant floor we pass beneath a line of chickens, whirling along more steep hooks; liquid falls from their carcasses and lands with chilly plops on my scalp.”

Or this description of the experienced lettuce cutters on Thompson’s crew in Yuma Arizona:

“As they move away from the road, it becomes difficult to make out the details of their activities, but one thing is quite obvious: They move fast. A dozen knives are stabbing and slicing and slashing, sending hundreds of leaves flying in all directions. As they march across the field they are military in their efficiency, leaving nothing behind except glistening white stumps and the occasional discarded head of rotten lettuce.”

Such writing moves the book along and makes it a pleasure to read. For a narrative about miserable working conditions it is quite entertaining. I found it difficult to put down.

Throughout it’s clear that Thompson really cares about his subjects. For starters, he speaks Spanish (many, though not all, of the workers are Spanish speakers). By working alongside his new colleagues as hard as he is able and listening more than he talks he inserts himself gently into their lives, slowly building trust, and being rewarded with their stories. Surprisingly, the vast majority of the Latino immigrants he encounters are helpful to him, even though some later admit they were suspicious and believed him to be an immigration official.

The book is full of accounts of workers encouraging one another, picking up the slack for each other when energy flags, and sharing food, jokes, and stories. Once Thompson sticks around in any of the jobs for at least a week, people treat him as they treat one another. On many occasions, for example, workers cut extra rows of lettuce for him when he falls behind. Others offer friendly advice on how to deal with an extremely abusive boss. Both immigrant and non-immigrant workers confide in him, offer him rides, and invite him into their homes.

In retrospect, the overall picture of the workers does come off as being a bit romanticized. It’s hard to believe he didn’t run into any complaining, dishonest, backstabbing co-workers at his level. Or maybe he chose not to focus on those people. The villains in the book were all supervisors or workers just one step higher up the food chain—like one particularly memorable food runner at the Mexican restaurant where Thompson works.

I honestly don’t know if this is a flaw in Thompson’s reporting. I’ve worked with large numbers of immigrants over many years in the restaurant business, and I’d have to say that my experience was similar to his.

There are also moments of hope and inspiration, such as the account by one of Thompson’s co-workers’ of the 2006 immigrant rights marches that even touched Russellville, Alabama, where Thompson is living and working in a poultry plant. There are even a few myth-busting surprises along the way. I won’t reveal them completely but I was surprised at which job was the best and which was the worst. I also learned that the agricultural guest worker program is not always as bad for workers as I thought, all things considered. Then there was the scene in the HR office in the Alabama chicken plant. Let’s just say I was pleasantly taken aback. And stricken that our economic system requires so many people to keep their values and their jobs on entirely different planes.

Though Thompson tries to remain vague about his intentions and underground as far as his status as a journalist, he becomes friendly enough with some of his coworkers that he really wants to tell them the truth about why he is there. The ones who do eventually find out are supportive and cheer him on for telling their story. Of course they want their story told. If more people really knew about the day-to-day, might they demand change?

And that’s really the point of this book. To tell their story. We need it amidst the noise and bluster against “illegals” and the hateful, blatantly racist rhetoric of the tea party movement. I’d like to hand a copy to anyone I’ve ever heard say a bigoted word about immigrants and just ask him or her very nicely to read it. If only they would. I’ll even make a deal. I’ll read Atlas Shrugged in return.