Seven Reasons Why the Time is Ripe for School Lunch Reform 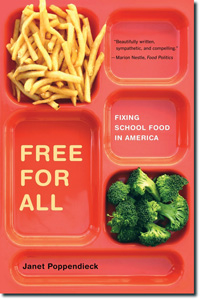 Could school lunch get the universal overhaul it needs — not unlike, say, health care — and some time soon? You betcha, says Janet Poppendieck, author of the recently published Free For All: Fixing School Food in America. (Read a review at Civil Eats.)

At a midday panel held at the California Endowment Conference Center in downtown Oakland, hosted by California Food Policy Advocates, and attended by anti-hunger activists and school food folk, Poppendieck, a sociologist at Hunter College, City University of New York, outlined why there’s no time like the present for reform in the lunch room.

Not surprisingly, given the hour and agenda, school lunch was on the menu. School lunch to be exact, courtesy of chefs from Newark Unified School District Nutrition Services. (School food staff, including the all-important drivers, showed up to feed the crowd on their Spring Break. I’m assuming they were paid for their efforts. Still, giving up a day off  to cater an event is impressive.)

And, in case you were wondering, I noshed on a perfectly edible meal of bow-tie pasta with marinara sauce made from scratch, a panini sandwich on sourdough with commodity cheese and school-made pesto, salad bar offerings, and fresh, cut fruit.

Well fed, we moved on to the matter at hand. The accessible academic walked us through her “7 Cs” — bite-size talking points illustrating why school lunch is ripe for reform:

1. Convergence of agendas: Concerns about hunger, nutrition, obesity, health, and the environment are merging in the public arena.

2. Conditions of urgency: Obesity among children is on the rise, lifestyle diseases like type 2 diabetes are skyrocketing among the young, yet more kids are going hungry. Concerns about carbon emissions, loss of farm land, and global warming are all going up, up, up.

4. Consciousness: Awareness of hunger, food insecurity, and the impact of lifestyle choices on what we eat and how it’s produced, is growing.

5. Company: Lots of fellow travelers on the better school food beat are coming together to break bread on this issue. Advocates for school food reform, health and medical associations, even seemingly unlikely allies like the Department of Defense, are joining forces at the cafeteria table.

(Poppenieck notes that a group of retired admirals and generals active in Mission Readiness recently wrote a report on the impact of the obesity epidemic from a national security perspective. The irony here: The current school lunch program owes its existence to a push, in large part, from military leaders seeking to beef up school nutrition because many young men were so undernourished during World War II they were unable to serve in the Armed Forces.)

And, of course, the big gun herself FLOTUS, otherwise known as Michelle Obama, is on board.

6. Citizens: Concerned adults are demanding that food improve in the school cafeteria.  We’re talking millions of angry moms and dads.

7. Critics: People like Jamie Oliver, who bopped across The Pond to shake up the school lunch menu in West Virginia, and the anonymous teacher blogging at Fed Up With Lunch, who documents the sorry state of food at one Midwestern school every day, are raising awareness and presenting alternatives to what’s on offer now.

Poppendieck is a proponent, as her book title suggests, for doing away with the current three-tier payment system (free, reduced, and full fare) for school lunch across America. But she’s no starry-eyed idealist.

She knows there’s no such thing as a free lunch; her best guess is that a wholly subsidized program would cost the U.S. government an additional $12 billion a year. Depending on your perspective, that’s an awful lot of cash, or a drop in the bucket compared to what the country spends to go to war.

To paraphrase Jamie O in a recent Food Revolution episode: “It’s all about the money.” Dominic Machi, director of Child Nutrition Services for Newark Unified, would agree. So would many others.

The discussion sparked lots of chatter about the status of school lunch reform in Congress and the nutritional requirements of school food. Some got down to details in snappy fashion. But with all due respect, policy wonks can waffle on about legislative agendas, government data, and nutritional guidelines until your eyes glaze over.

The youngest panel member Beebe Sanders, a junior at Berkeley High School, kept things real and fresh. This girl has wisdom beyond her years and gives me hope that maybe we’ll see a national shift in what kids eat at school in my lifetime, as long as we adults don’t mess it up.

Beebe Sanders hit the bull’s-eye with the suggestion that nutrition education needs to take place in schools — in the classroom — to change childrens’ attitudes about school food, which can carry a stigma, even with the youngest eaters, as bad food for poor people.

Jamie Oliver long ago figured out you need to get the kids to buy in, as have numerous school food fixers before him.

“We need to change the mind-set about how kids feel about school food and why they think it’s uncool to eat it,” says Sanders, who works with Farm Fresh Choice, a local effort to get food to impoverished, hungry people.

“Kids just don’t like the idea of eating at school –  cafeteria food is just not that pleasing, let’s face it — so they go off campus and buy fast food,” she adds. “Schools need to explain to students why eating healthy school food is a good thing.”

Do you agree? Is it the money, the mind-set, a combo of the two, or something else entirely that needs addressing before all our kids get to sit down at school with a tray of food that’s nice, nourishing, and doesn’t have nuggets in its name?