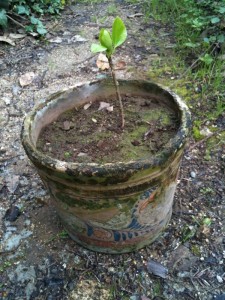 I have committed theft…and am proud of every minute of it. It all started on my 30th birthday a couple of years ago in a rented Alfa Romeo on a road trip across the Tuscan hillside. The victim was a sweet, juicy yet firm pear at the peak of its season. Desperately wanting to capture the fabulous adventure I was having and in an effort to perhaps hold onto the inescapable ticking of time, I gently spit out the last pear seed into a small pocket of paper and tucked it into my backpack. A week later, after an extended stay on a working cheese farm and vineyard, I duped customs officials in Milan by declaring nothing, inwardly flushing with trepidation that they would discover the two blocks of aged pecorino, vacuum-packed sleeve of boar salami from Terre Madre or gasp! my precious stolen seed. I slipped through without a bit of confrontation and began the process of dream vacation come down.

A year and a half later I am gazing at a wondrous miracle. The seed – a symbol of my own aging, a marking of past to present, a tactile image of how it felt to seize a special once-in-a-lifetime travel opportunity – has sprouted! Upon my return and after unloading all my goodies and gifts, I gently handed over the packet of seed specimens to the only one I could trust. My boyfriend, a botany enthusiast and tender of our small farm in the Santa Cruz Mountains, surely felt the weight of this responsibility. If the icy claws of that first winter had grasped its life away, my disappointment would have been hard to conceal. And when an accidental tippage of the ceramic pot my seed now nestled in occurred, his displaced outburst was definitely that of not wanting to let me down.

But regardless of the outside influences of climate or human intervention, what are the chances that this single speck of future life would grow? It makes me ponder the genetic ancestry of the pear varietal, or the work of that first farmer who planted it. Where did it actually come from and when? Did the first seed travel a great distance, across oceans and mountains like mine did? Did past orchard owners smile in anticipation like I do every time I peer at my baby tree, perhaps wondering who might enjoy the fruit in the future?

I have since figured out that the pear I ate that day was most likely a Pera Abate, know as Abbe Fetel outside of Italy. It was named after a 15th century French monk and is now grown extensively in Italy, mostly in the Emilia Romagna region. It is elongated with golden yellow or russet skin and fragrant white pulp. Coming down to earth a bit after the initial excitement of success, I also realize that pears, like apples, are cross pollinators and need to be grafted to produce edible fruit. My little seed most likely won’t create the same kind of pear that I ate on my birthday…and whatever fruit it might grow won’t appear for a looooong time, if at all. Perhaps 15 or 20 years down the road. I could try to use my sprout as a cutting, grafting a sample of it onto another, more viable and established rootstock or tree. The good news is that pears are known to be pretty easy in the grafting department. But by no means am I an expert in this domain, and any task such as this would be left to said green-thumb boyfriend.

The reality of my seed saving daydreaming is that those ancient pear farmers transported whole cuttings, not seeds. Just like prized wine grape varietals that get smuggled across continents. It’s not like I could go stealthily pick a grape from some legendary Burgundian vineyard and expect it to grow back home, even if I didn’t get shot in the process. And so it is with my little pear project, I’ve learned. However, I don’t regret acting on my naivety in the least. I remain astounded that one tiny saliva coated seed is now a bright, shining sprout. I will continue to dwell in ideas of shared human consciousness, of unity through farm culture, of ancestral Italian heritage reawakening in my own garden.