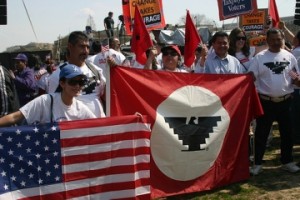 The legacy of the Mexican-American civil rights activist and labor organizer lives on, though many farm workers today still struggle to attain the most basic rights.

This week, March 31st was the birthday of farm labor organizer Cesar Chavez, celebrated as Cesar Chavez day in eight US states. Most of them mark the occasion with symbolic commemoration, but a few, notably California, have actually made the day into an official holiday. Chavez’s legacy is so important, however, that there’s a movement underway to have the day declared a national holiday.

Chavez (1927–1993), a Mexican-American farm worker and civil rights leader, joined with Dolores Huerta in founding the National Farm Workers Association in 1965, which later became the United Farm Workers of America (UFW). The first successful farm workers’ union in the country, the UFW succeeded in securing some of the nation’s most disadvantaged workers better wages, benefits, working and living conditions and job security. The UFW rallying cry, “Sí, Se Puede!” will strike Obama supporters as familiar: In English, the chant is “Yes, We Can!”

If Chavez Day does become a national holiday, it would be more than just another day off work. This is a day not only to celebrate Chavez’s positive impact on the rights of farm workers, but also to pay attention to the fact that many farm laborers today, lacking the benefit of union protection, still lack the most basic rights. These workers are often cruelly exploited or even kept as slaves, and the fight for their rights is still agonizingly difficult and too frequently disappointing.

There are brave groups doing something about this situation aside from the UFW, which carries on fighting for its members. The Coalition of Immokalee Workers in Immokalee, Florida, is organizing a three-day, 25-mile Farmworker Freedom March next month, in which workers will march from Tampa to Lakeland, Florida. The organization is also touring the mobile Florida Modern Slavery Museum around the state to educate people about the fate of modern farm workers.

Additionally, the organization Student Action with Farmworkers has named this Farmworker Awareness Week. So take a moment to think about those who picked the tomatoes in your lunchtime sandwich. And then forward this on to a few others who might appreciate knowing about this too.

Katherine Gustafson is an award-winning writer, journalist, and editor whose articles, essays, and stories have been published in numerous print and online media, including The Christian Science Monitor, Johns Hopkins Magazine, The Huffington Post, and Best Women’s Travel Writing. Her first book, 'Change Comes to Dinner' -- about good news in sustainable food -- was published in 2012. She lives with her husband and daughter in the Washington, DC, area. Read more >