A Spotlight on the Invisible Faces and Hands of Agriculture 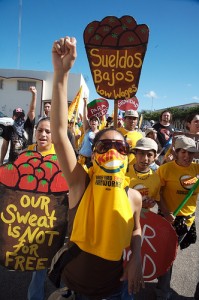 The rise of the local food movement, the increasing numbers of farmers markets, the USDA campaign,“Know Your Farmer,” and the #Profood dialogues on social media and many other food, farm and agriculture movements are successfully hero-izing farmers and bringing light to their valuable services and their plight. Advocates should be proud for all the hard work and continuous energy towards this movement. While we witness and work for the sprawling awareness in the movement, we should take time to focus on an often invisible and under appreciated component of this movement, farmworkers.

This week is National Farmworker Awareness Week. The group, Student Action with Farmworkers (SAF) aims to raise national awareness about this segment of workers that are largely responsible for feeding our country and are often the most vulnerable workers in the agricultural business. They started this awareness week because:

Farm work is the third most dangerous job in the U.S., yet the people who plant and harvest our fruits and vegetables lack many of the basic worker protections that most of us take for granted. Things like overtime, unemployment insurance, even protection when joining a union is not guaranteed under federal law.

The harsh reality for farmworkers also includes little to no access to healthcare, poor occupational safety and frequent accidents on the job without healthcare support from the employer. There’s also considerable exposure to toxic chemicals while working in the fields, which creates more health concerns. The Southern Poverty Law Center reported that women farmworkers face additional problems such as poor access to children services, and sexual harassment and assault in the workplace.

These realities indicate that the beast (the system as a whole) of the agriculture industry is marginalizing many farmworkers. This happens because the majority of farmworkers are minorities, immigrants, and many speak very little English. This makes them extremely vulnerable to injustices and that is why they need advocates to help give them a voice, and help change these unacceptable working conditions.

SAF’s is rising up, raising awareness, and demanding “just living and working conditions for farmworkers and an end to unfair treatment under the law.” The overall call is for “fairly harvested food.”

As we continue to meet our farmers, remember that we are also connected to farmworkers because much of the food we eat was planted and harvested by the hands of these workers. As we continue our days, shop for groceries, and make family dinners, farmworkers continue in their harsh reality. They continue as the invisible force of agriculture, living and working in unjust conditions, unless we standup now, spread awareness of their realities, and demand change. Please visit Student Action for Farmworkers for ways to take action, local events, and campaigns to join.

Sarah Wechsberg is an entrepreneur and sustainability consultant. Her personal and professional passion is to help create a thriving and sustainable food system. Sarah's known for her sustainable business development expertise, her vast network, and endless energy for helping food and farm startups. While her heart and mind inhabit both Raleigh, NC and San Francisco, CA, wherever she goes she connects with the local foodies, farmers, restaurants, and advocates to hear their story and share the joy of food and agriculture. You can find more of her writings on The Idea Hive blog, the FarmtoTable blog, or follow her Twitter account, TheEcofoodie. Read more >