Temple Grandin: A Review of the HBO Biopic (VIDEO) 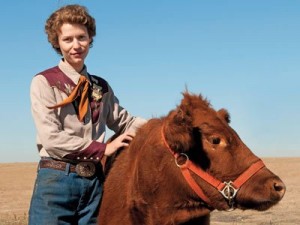 Temple Grandin, the eponymous HBO biopic about the education and early career of the professor, author, and animal behavior expert is, in many ways, also a story about cows. Near the beginning of the film, a 19-year old Grandin is lying in a cow pen surrounded by animals; her face is smudged with manure and she’s grinning wildly. The scene foreshadows Grandin’s lifelong effort to transform the treatment of animals within industrial agriculture and, in the words of Polyface Farm’s Joe Salatin, “let cows express their unique cowness.” Similarly, this scene shows a rare, carefree moment in the life of a high-functioning person with autism, struggling to make a place in the world. The film as a whole attempts to let Grandin express her own “Grandin-ness.”

Temple Grandin moves chronologically with Grandin (played surprisingly well by actress Claire Danes) from her first summer spent on an aunt and uncle’s ranch in the late 1960s – where her close bond and ultimate identification with the cows expands on her nascent interest in their welfare – through college and graduate school, to her early professional years as a researcher, animal welfare advocate and livestock consultant. We see Grandin laughed at, discredited, ignored and harassed. And yet, even in the harsh, male-dominated world of industrial livestock, she finds an entry point, via her heightened visual and auditory sensitivity, into the lives of the animals.

What Danes’ Grandin lacks in traditional social skills, she more than makes up for in perseverance. In one scene she dons men’s clothing (never to take them off again), rolls in mud, and drives an oversized pickup truck to gain entry to a giant Arizona livestock facility she hopes to study. While the handlers and cattlemen around her maintain a familiar emotional and intellectual distance from the animals, we see Grandin crawl through cattle dips, chart the cows’ movement when they’re anxious and listen, literally, to the sounds they make when they’re frightened.

Her close observations and attention to animal psychology pay off when Grandin is invited to design her first livestock facility, where she builds a “dip” for bathing the cows that has them enter the water through a curved passageway meant to simulate their natural pattern of movement. By keeping the animals angelically calm, she cuts down on the need for animal handlers. Even viewers who have never considered the well being of livestock can understand the elegance of her design, and the film’s intermittent use of diagrams—meant to simulate Grandin’s visual sensibility—only serve to strengthen her case.

Like Grandin herself, the film stays ruthlessly on point. “We raise them for us,” Grandin’s character says on more than one occasion, “We owe them some respect.” Grandin’ approach is pragmatic and she appears to take industrial-size livestock facilities as a fact of life. But her goal to reform their design is expressed in terms that the industry can relate to: “I believe that what’s good for the animal is also good for business,” she tells a conference room full of skeptical cowboy-hat-wearing executives.

While the film doesn’t concern itself with larger questions about meat eating or the unnatural and overblown scales of the confined animal feeding lots, Grandin creates systemic change by physically re-designing a slaughterhouse. (We are told in the film’s credits that over the last several decades, Grandin has had some control in designing as many as half of the slaughter facilities in the United States.) The film illustrates Grandin’s core belief: that a cow’s life is as valuable for its own sake as it is for our consumption. So when she envisions a cow on its way to a slaughterhouse she has designed, she sees the animal as, “in that moment…..still an individual.” “It was calm,” she says, “and then it was gone.”

Like the real Grandin, the film’s central character takes concrete, lasting steps toward a more humane food system. But Temple Grandin shouldn’t be dismissed as an innocuous, feel-good film. Some viewers may choose to see it as a challenge—a challenge to give all differently-abled people an opportunity to articulate their vision of the world—and an invitation to treat every animal as a creature of value, deserving of our utmost respect.

Watch a clip of the BBC movie, “The Woman Who Thinks Like a Cow“, on the real Temple Grandin

Here is the trailer for the HBO film: