Have You Hugged Your Butcher Today? | Civil Eats

Have You Hugged Your Butcher Today? 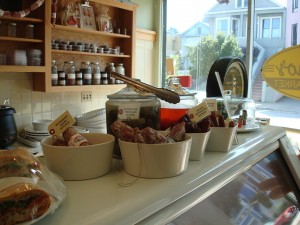 In my last post I wrote about the importance of slaughterhouses and meatpacking plants within the local meat supply chain. While these facilities are a crucial factor if there is to be a systemic movement from large-scale industrial meat processing to a more localized practice, they don’t quite get steaks on plates. There is one more stop in our local meat story: the meat counter.

While some consumers purchase local meat through a CSA, most of us buy our chops from a retailer, either a butcher shop or a grocery store. If you have a butcher shop in your neighborhood, you are among a select, lucky few. In the last fifty years, butcher shops have been shuttering their doors, unable to compete with large retailers for customers’ dollars. Many factors have influenced this trend: changes have occurred in the way we shop, the quantity of meat we buy, and the packing of it.

Regarding the consumer experience, few Americans shop in specialty food stores anymore (butchers, produce stores, bakeries, etc.). Instead, they spend the majority of their food dollars either eating out or at large retailers. Per the USDA’s Economic Research Service, “In 1970, 26 percent of all food spending was on food away from home; by 2005, that share rose to 41 percent.” When we do cook at home, most of us shop at supermarkets or warehouse clubs and super-centers. In 2008, supermarkets accounted for almost 58 percent of food sold for home consumption and warehouse clubs and super-centers sold just over 18 percent, while specialty food stores picked up only 2.8 percent of our grocery cart dollars.

Still, if we are at the grocery store, as opposed to a restaurant, we buy less beef than we used to. Beef consumption has declined in the U.S., from about 80 pounds per person in 1985, to around 60 pounds per person today. Health concerns regarding cholesterol and saturated fat have led us to consume less beef, while a simultaneous increase in popularity of chicken in the U.S. diet has also forced steaks off the dinner plate. Well, maybe a more accurate description would depict chicken nuggets, chicken patties, and chicken wings taking center stage as demand for convenience foods has grown. Additionally, the lower price of chicken relative to beef hasn’t hurt poultry’s popularity either.

Seeing that our meat intake is less than what it was 50 years ago—though it should still be even less now—our supermarkets no longer receive animal carcasses and they do almost no processing or packaging on site. Gone are the days when supermarkets and butcher shops actually had skilled butchers on staff to help costumers with their questions and to suggest new cuts or preparation methods. Consolidation and vertical integration in the meatpacking industry led to the rise of “boxed beef,” retail cuts sealed in plastic and packed in cardboard boxes. Instead of shipping carcasses from packing plants to retailers, plants began offering display case ready cuts. This development allowed retailers to cut costs on labor and time, and purchase more of the cuts their customers liked without having to market the entire animal. Grocers in Texas could order more brisket; stores in L.A. could stock more tri-tip. Large retailers no longer needed butchers on staff and could therefore focus more on promoting one-stop shopping perfectly suited to the preferences of their carnivorous customers.

As we are rethinking the way we produce and consume meat in this county, many consumers are coming back to their local butcher shop. One such shop here in San Francisco is Avedano’s Meats. Avedano’s opened their doors in 2007, in a space that has been a butcher shop since 1955.  Avedano’s has skilled butchers who take pride in the craft of their profession. I recently met with two of them, Chris Arentz and David Budworth, to discuss the role of butchers in the sustainable meat story. 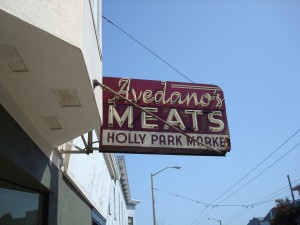 Avedano’s sources local, sustainably produced meat and poultry. They also cut all of their meat “the old-fashioned way, with a handsaw, a meat cleaver, and a boning knife.”  Both Arentz and Budworth learned how to butcher through apprenticeships, which seems to be the most viable way for professionals to enter the industry. There are a handful of colleges that offer certificate and degree programs in meat cutting, but even graduates of these programs often still need to work as apprentices at a butcher shop in order to learn the trade. With fewer butcher shops left, there are fewer places to learn. Some culinary schools have a class or two on meat cutting and preparation, but an elective course by no means qualifies a novice to turn an entire carcass into an array of sellable products.

As a trained butcher, Arentz spoke about the satisfaction he feels by selling the whole animal, rather than just marketing the most popular cuts. “It takes a lot of work to raise an animal from birth to death,” Arentz said. “Being a butcher, the ultimate respect I can pay to the animal is not to waste any part. That would be a waste of not only the animal, but also the farmer’s work, time and energy that went into raising it.” A shopper at Avedano’s can experience a butcher’s passion for meat. Arentz and Budworth’s willingness to educate their customers about lesser known cuts is evident. They often suggest new cuts for a customer to try and recommend ways to prepare the meat. In addition, they make sandwiches and other cooked foods that Avedano’s sells, showcasing their culinary skills and introducing new products to shoppers.

Since sustainably produced meat animals cost more to raise than their conventional counterparts, a retailer’s ability to sell the entire animal, from tip to tail, depends on its economic viability. Local meat needs local butchers. It’s up to you to support your local butcher!