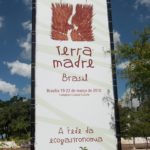 Attending Terra Madre in Torino, Italy in October 2008 was one of the highlights of my young career. In an enormous conference center built for the winter Olympic games, over 7,000 farmers, chefs, academics, students, fisherfolk, environmentalists, and writers gathered together for a week of discussion, celebration, networking and, of course, eating. The collective energy was overwhelming, and inspired me for months afterwards. So when contacts from Slow Food Sao Paulo invited me to attend the second Terra Madre Brasil—a national meeting of Slow Food affiliates from all over Brazil—I was eager to re-experience the infectious energy I felt in Torino in the country with which I am so quickly falling head-over-heels in love.

The setting, I must say, was a strange one. Brasilia is a bizarre city, and certainly not the first Brazilian locale that comes to mind when I think of a sustainable food conference (especially when cities like Curitiba and Belo Horizonte are hailed for their sustainability initiatives). Brasilia was built as the “city of the future,” the only community built in the 20th century to be dubbed a UNESCO World Heritage Site. The purpose-built capitol of the country, it is renowned for its sleek architecture, innovative layout, and futurist bent. But what was considered wise urban planning half a century ago (Brasilia is celebrating its 50-year anniversary this year) is now the cause for growing concern. Why? Cars.

In 1960, peak oil wasn’t even a gleam in the eye of the catch-phrase makers’ eyes, and automobiles were all the rage. What then seemed like a brilliant idea—designing a city that would facilitate easy driving and parking—is now a challenge to the city that has, like many others in the Southern hemisphere, sprawled at an alarming rate. Residents complain of ever-worsening traffic, and the city’s pathetically short metro system does little to ease the commutes of wealthy suburbanites and poor favela residents living on the outskirts of town.

However, what Brasilia lacks in environmental modeling, it makes up for in political sway. As the home of Brazil’s embassies and most of its national politicians, the organizers of Terra Madre Brasil believed they could gain political visibility for their cause by locating their 550-person conference smack in the middle of the federal district of the capitol.

I was fired up as I rode the bus back to my friend’s apartment on Monday evening as the sun began to sink in the vast Cerrado sky. I found myself contemplating why I felt such a different energy at Terra Madre Brasil than I often do at sustainable food events in the U.S. At Terra Madre Brasil, a tasting wasn’t just a tasting, it was a showcase of fruits native to the Cerrado and Amazon that are under threat by urban sprawl and agribusinesses. A display of manioc-derived products wasn’t merely a fancy food show, it was an exposition of native Indio culture and a call to protect Brazil’s staple food in all its magnificent incarnations. A roundtable of chefs wasn’t merely chew-the-fat smalltalk and self-promotion, it was a salon of philosophies, a legitimate questioning of how to protect Brazil’s unique and remarkably diverse culture through gastronomy. That level of activation, of engagement with the core issues affecting food and agriculture, was so enticing to me. And yet it felt a bit foreign.

If I had to pinpoint my top pet peeve about the food movement back home, it is that we are often too timid. This, it seems, has been changing quickly in the past few years, but I believe Americans—particularly those in their 20s and 30s that have grown up in largely peaceful, prosperous times— have become fairly complacent politically. Yes, we staged protests against the war in Iraq, and yes, we elected Obama. But the word “revolt”—the call to rebel against the circumstances we’ve been handed— still feels a bit taboo, a bit too radical for those of us who have grown accustomed to our creature comforts in the age of easy money and disposable culture. When compared to the highly participatory, dynamic democracy that so characterizes Brazil and other Latin American countries’ political climates, the level of rabble rousing in the States often feels like standing water next to the Iguacu Falls of Brazil.

So perhaps the most satisfying aspect of Terra Madre Brasil, for me, was the thread of explicit political activism that colored the entire event. From the banners lining the FUNARTE Cultural Complex donned with the call to action “Let’s Prepare a Revolution Together” to the conference participants representing the MST, Brazil’s famed landless peasants’ movement, Terra Madre Brasil wore its politics on its sleeve. There are few places more exciting than Brazil at this moment to explore land use, agriculture, conservation, food access and sustainability. Unlike in the U.S., where food and agriculture still remains a fringe issue to the political mainstream, in Brazil, issues around hunger, environment and agriculture always seem to be on the political table. Right where they belong.