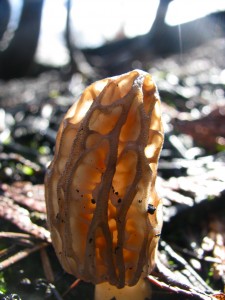 To those of us that forage for wild mushrooms, morels easily are the most enigmatic. Far and away, morels (Morchella species) draw more people into the woods than any other mushroom. In fact, a large percentage of morel hunters will retire their mushroom baskets for the year once the last morel has fired its spores and withered.

What is it about the morel that has such allure? Sure, they’re tasty. But, arguably, there are tastier members of the Fifth Kingdom.

To many, morels are the first sign of spring. For those of us east of the Rockies, we cannot be blamed for any excuse to get out of doors after being cooped up inside for month after snowy month (and, no, sitting inside a shanty on a frozen lake doesn’t count).

It’s likely that morels attract more neophyte mushroom hunters because they’re fairly unlikely to be mistaken for an inedible species; the really dangerous species (e.g. Amanita spp., Galerina spp.) mostly occur later in the year. Most people in the Midwest or Northeast know someone that hunts morels and will be willing to show a neophyte the ropes (though, it’s unlikely that they’ll share a favorite “spot”—don’t even ask!).

I get asked all the time: Where do you look for morels? Honestly, morels can be found just about anywhere in a good year. I have found them in gravel parking lots, in standing water on lawns, in wheat and soybean field stubble, and in the cinders along railroads (the latter one is actually fairly well known among morel hunters).

Many situations are exceptional, however. In general, morels will be found more regularly in younger wooded areas and the edges of mature woods on gently sloping land. Morels don’t seem to like having their feet wet, so usually not in bottomlands. Again, everyone has a spot that is the exception to any rules. You can look for trees that flourish in the same habitat as morels; in some cases the morels may even be mycorrhizal symbionts with those trees. The most successful morel hunters can identify tree species in the early spring (when there is little foliage), relying on the appearance of bark and twigs, or last year’s leaf litter. This is tough to do, but in general, to pick mushrooms throughout the year, one needs to be able to ID trees and other plants, in addition to mushrooms.

In the Midwest, look for recently dead American elm trees. The bark should just be pulling away from the tree in large sheets and some bark may even by lying on the ground (be sure to check beneath bark!). Dead elms can be almost automatic for morels. American elm is noted by its beautiful vase or flask shape; the base of mature elms will not be very round nor radially symmetrical. By the way, we have several species of elm in North America and most will not be productive; many occur in swamps. Don’t waste time—know your trees. Other trees throughout North America that share similar habitat with morels and that are most productive include white ash (and sometimes green ash), various wild cherry, white pine, cottonwood, tulip, and I have even had good luck around American sycamore.

The tulip tree (Liriodendron tulipifera) is sometimes called “yellow poplar” (even though true poplar is a completely unrelated genus) and is a favorite morel species in much of the Midwest and East. In fact, many consider the tulip morel to be different from other yellow morels; it is most often much paler in color.

By the way, these rules apply only to those trees listed above when growing wild. Any of those tree species in a planted setting (say, in someone’s backyard) may be productive for morels, but it’s unlikely. There is one planted tree, however, that you should seek out. Across the Midwest and Northeast, well-known hotspots for morels are old apple orchards. I’m talking fallow and no longer being cultivated. No one knows why, exactly; possibly there’s a mycorrhizal association between apple tree roots and yellow morels. Just one more reason why morels are the most enigmatic mushroom. It’s likely you have some sure-fire spots for morels that aren’t included above. Indeed there may be but a single thing that morel mavens can agree on: there’s never enough of them!