Dirt! The Movie: A Review for People Who Do and Don’t Understand Why It’s Important | Civil Eats

Dirt! The Movie: A Review for People Who Do and Don’t Understand Why It’s Important 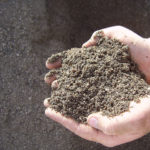 “Dirt is community at many levels.” That’s just one of the many rich quotes from this wonderful documentary all about “earth’s living breathing skin called dirt.” The film is so packed with wisdom, knowledge, ideas, and purpose that I took four pages of notes while watching it and barely scratched the surface. Each enraptured moment brought me to the conclusion that this film has something for everyone – from the hardcore dirt aficionado to the casual earth dweller who stumbles upon it on PBS, when it makes its nationwide broadcast debut at 10:00 p.m., April 20th, Earth Day’s 40th Anniversary. (Set your DVR.)

The film, which is narrated by Jamie Lee Curtis, tells the story of humans trying to re-connect to dirt and, as we’re taken from California vineyards to the plains of Kenya, it reveals how repairing our relationship with dirt can create possibilities for all life on earth. As a student of Permaculture who geeked out as Brock Dolman (a favorite teacher at the Occidental Arts and Ecology Center in Sonoma County) shoved his hand into a stack of gorgeous black gold, it was a pleasure watching this film. It’s inspiring and has the potential to elicit some excitement about the importance of possibly the most important living thing on earth. Where are our front-page headlines about the state of this awesome resource that “might be more alive than we are”?

Vital information is delivered via engaging animation, site footage, and interviews with experts from around the world, including: Vandana Shiva, Peter Girguis, Wes Jackson, Jerri Clover, Majora Carter, Wes Kinney, Eliot Coleman, Andy Lipkis, Bob Cannard, Piere Rabbi, John Todd, Bill Logan and Paul Stamets, to name a few. Directed by Bill Benenson and Gene Rosow, it skillfully communicates stats about the matrix of life on earth, from the mundane to complex, within a global perspective. It covers, simply and concisely: the history of the earth, the importance of dirt, how our relationship has been lost, how we destroy dirt in pursuit of coal and other resources we deem more valuable; and the impact of: asphalt, climate change, cheap electricity, dead zones, run off, crop failures, and how civilization we’ve seen societies rise and fall based on how they treat dirt. Whew.

Dirt! The Movie doesn’t shy away from communicating even more painful truths either. It delves into hunger riots, conflicts in Sudan, farmer suicides in India, the financial plight of farmers around the world, global corporate takeovers of industry and farming, and the damaging effects of GMO crops. One of my favorite quotes: “We can’t hear the soil scream, we can’t understand its cries…What if each organism in soil had a right to vote? Would they reject humans as a virus?” As Wes Jackson so eloquently put it, “It’s the end of a destructive economy and time to live within our means.”

The overall message is one of hope. There are stories of projects that support the root diversity below ground and green diversity above, like those at The Land Institute in Salinas, Kansas; and of the many CSAs, composting initiatives, school and community gardens, and green roofs that support urban connections with soil, plants, and food. As well as initiatives to harness energy from soil by creating microbial fuel cells. The hope begins with a recognition that we’re not separate from soil and that it provides physical, intellectual, and emotional connections for humans.

A Sundance Film Festival Official Selection, Winner of Best Film in Our Future from the Mendocino Film Festival and the Maui Film Festival’s Winner of Best Green Documentary, I give Dirt! The Movie two thumbs up. It will be available on DVD through Docurama Films starting April 6, 2010 (in eco-friendly packaging, of course!). Share it with your friends, neighbors, colleagues, and don’t forget the younger ones! (I’m no expert, but I think fourth or fifth graders could understand it.)