If You Give A Kid A Cupcake: A Comment on the Bakesale Brouhaha | Civil Eats

If You Give A Kid A Cupcake: A Comment on the Bakesale Brouhaha 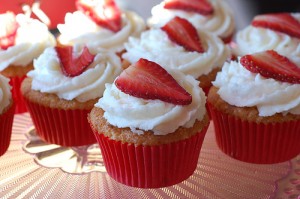 Through a very sophisticated mathematical calculation, I have figured out that I have baked 1,532 cupcakes, cookies and little gooey pecan thingies for school bake sales. I hated every minute, but I did my tour of duty. And yes, I cheered when the last of my kids hit middle school and it became uncool for his mom to show up with cupcakes for any reason. But even I am horrified that bake sales are on the chopping block in the fight against childhood obesity. Bake sales? Really?

In New York, school officials are working to create a policy that would limit bake sales. In an effort to reduce childhood obesity, they are looking to ban baked good sales from schools, with the exception of one day per month or after 6 p.m. when very few people are around to buy or sell their wares. Instead, PTAs and other groups will be allowed to sell fresh fruits and vegetables along with some packaged items that are on the district’s list of healthy snacks.  Doritos are on the list. A chocolate chip cookie baked by Grandma, not so much.

I had a heated discussion about this issue with one of my young, zealous friends who is almost always a food buzz killer.  “But don’t you think that schools can raise just as much money if they sell carrots?” she asked. After a long pause, and much thought, I said “No, not ever.”

From a food policy standpoint, “Setting out guidelines for when and what is included in a bake sale may be a good way of modeling healthy food habits, which include variety and moderation,” IATP Food and Society Policy Fellow Alethia Carr says,  “A bake sale held monthly, is different from a weekly sale for fund raising.  A monthly offering of baked goods, that are wholesome, good food, including those with fruits and vegetables in the recipe, demonstrates a form of good eating for our children, while infrequent enough to demonstrate moderation.”  Carr says, “We have to remember that in schools, we’re really showing our children how to live.  Let’s make sure we’re doing it in a way that promotes good health.”

But are we going too far?  Cheryl Danley, an academic specialist at CS Mott Group for Sustainable Food Systems at Michigan State University believes that it is a good move for schools to begin to control what is on the school campus and to look at the various ways children access empty calories.  “There is something to be said for moderation and honoring and recognizing people’s food cultures.”  She thinks it is important to have discussions and forums about such moves.  “The New York City health department unilaterally ordered the transfat ban, and also the Mayor’s food Czar created  “green cart” program of fresh fruit vendors without consulting communities.”

But is the little bake sale where moms and kids bring in homemade goodies the main thing that’s making kids fat? Nancy Baggett, baker, writer and author of several books including The All American Cookie Book, says “the sugary colas and “fake fruit” drinks that folks guzzle by the gallon and 1,000-calorie burger and fries meals they routinely chomp down are the real problem because they are on menus every day.”  She adds that, “home-made baked sale goodies are a special treat eaten only once in a while. We always had school/church/community bake sales as I was growing up and almost nobody was obese, and even a slightly overweight child was an absolute rarity.” Baggett says, “The difference now is the fat-packed junk food and super-sized drinks, NOT the cupcakes from the PTA sale.”

Maybe traditional bake sales can be teachable real world moments for parents and kids, where the focus could lie more on education about moderation and less on dictating ingredients.  “It is important to teach children that they can enjoy an occasional treat as long as they engage in an appropriate amount of physical activity that allows them to burn calories and maintain a healthy weight,” says Maya Rockeymoore, Ph.D., president of Global Policy Solutions.  “School officials should consider acceptable alternatives to traditional bake sales such as “healthy bite” sales that offer more nutritious food items or “bake and shake” sales in which students purchase healthier baked goods while burning off excess calories with physical activity such as dancing, hoola hoop, or other active play options.”

“I think this knee-jerk reaction to the “obesity epidemic” is wrong, wrong, wrong” says Jill O’Connor, baker and author of several books including Sticky, Chewy, Messy, Gooey: Desserts for the Serious Sweet Tooth.“I am no longer allowed to bring home-baked goodies to the schools and no cupcakes on birthdays either.  But I can bring in processed snacks — as long as they have the nutritional breakdown listed on the package — are still permitted in limited amounts.”  She also comments that “as a country, Americans tend to swing from one extreme to another in an effort to solve such big (no pun intended) problems — there are no shades of grey, no middle ground.”

O’Connor is a scratch baker and a food purist in her own right. She makes a firm distinction between baking cupcakes from a boxed mix and icing them with canned frosting and a home-baked chocolate chip cookie made from scratch. “Kids should be exposed to real, honest-to-goodness baking, so they know what GOOD is, and will be more likely to pass up a Twinkie or packaged cookie if they have sampled something better.”  O’Connor also emphasizes the larger, satisfying benefits of actually producing homemade treats. “Real baking takes time, talent, patience and skill.  If you want something sweet badly enough and you go to the trouble to shop for the ingredients, and skillfully assemble them into a delicious dessert you deserve to have a taste.”

I feel a bit like Scarlett O’Hara, disheveled, flour on my face, holding a cupcake up to the heavens, declaring “By God as my witness, I will never do a bake sale again!”  But it won’t be because I am going to singlehandedly make kids fat with lemon blueberry muffins, or because I personally feel responsible for increasing fiber intake in little children, or because I want to tear down just one more cherished tradition.  It will be because I have baked my 1,532 cupcakes, and I am too lazy to do any more.