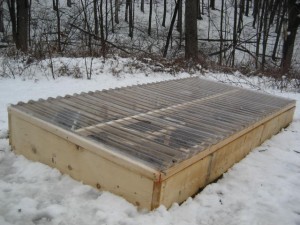 This is part 2 of a six-part series on seed starting. Part 1 can be read here.

Starting seeds early, when done right, is one of the most satisfying aspects of gardening. To see young, green shoots perk up through the soil while winter carries on outside is incredibly gratifying. It’s as if spring begins as soon as the first cotyledons (first leaves) pop open. It’s also an essential part of growing tomatoes, peppers, eggplant, and other crops, which otherwise don’t have a long enough season in northern climates to mature much ripe fruit.

For the home gardener lacking a heated greenhouse, there are two main ways to start seeds under protection: indoors or in a cold frame. We’ll take a look at both strategies.

For many gardeners, starting seeds indoors is the preferred, tried-and-true method. However, despite what most people believe, to be successful requires more than just a sunny windowsill. Successful indoor seed-starting requires the following components.

STARTING SEEDLINGS IN A COLD FRAME

(Above, a photo of a homemade cold frame produced from easily obtained materials. Instructions on how to build this cold frame will be covered in this series.)

A cold frame is a simple structure placed in the garden that features structural sides (usually made of wood) and a top made of a transparent material such as clear plastic or glass. Starting seeds in a cold frame eliminates several of the difficulties of starting seeds indoors. However, it requires a small investment of time and money in the construction of the cold frame and careful attention on cold nights. Here’s a brief run down of what you need to know for successful cold-frame seed-starting.

Summary: Cold frames provide an ideal environment for seed-starting. Gardeners are assured ample natural light and need not bother with much hardening off before transplanting. Cold nights are an issue: gardeners must monitor for sub-26 temps and provide additional insulation or supplemental heat on those nights if frost-tender crops are in the cold frame.

Doug Muller is co-founder of the Hudson Valley Seed Library. While teaching in Miami, he dreamed of getting back to his roots in upstate New York. In 2005 he returned, learning everything it takes to farm by hand and run a seed company. For more garden tips and to browse the seed catalog, visit www.seedlibrary.org. You can also follow the seed library on Facebook and Twitter. Read more >