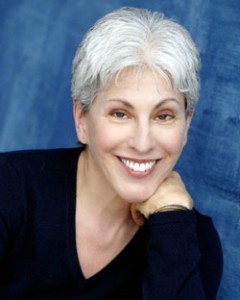 Vegetable expert and bestselling cookbook author Mollie Katzen’s handwritten and illustrated cookbook, The Moosewood Cookbook, (not to mention The Enchanted Broccoli Forest and her cookbooks for children, Pretend Soup and Honest Pretzels) introduced many to the love of cooking. She was inducted into the James Beard Cookbook Hall of Fame in 2007 and her most recent book, Get Cooking, was recently nominated for an International Association of Culinary Professionals Award. Beloved by many, new to some, Katzen continues her clarion call for taking back our food system one delicious meal at a time. I recently spoke to Mollie about vegetables, the new Good Food Movement, and the radical necessity of cooking.

CE: What do you make of the so-called Good Food Movement?

MK: It depends on who you talk to. It does seem that young people in their 20s mostly have food awareness, but you can’t generalize. I have a daughter in college and she’s a conscious eater, but her friends think she’s weird for eating healthy. So there’s still a stigma that eating healthy is weird, it’s not American. Back then, I was considered a “health food nut” because I broke away from the meat and potatoes that my mom served. And here, a generation later, my daughter is getting the same reputation.

What’s encouraging and exciting is that there are more farmers’ markets and there’s a growing awareness around food. For example, the campaign against transfats has been very effective. I’m also seeing a lot of encouraging food activism—but there’s a lot of work to do. And healthy food consciousness should not to be confused with our new food celebrity culture—TV shows like Top Chef, Iron Chef—have created a gap in what people are seeing on TV and the reality of what they’re eating.

CE: How do you think we got here?

MK: It used to be that we didn’t trust food in packaging and now we don’t trust food not in packaging. In the early 20th Century, the best job that a psychologist could have was working in advertising, which was really fashioned around selling and packaging food. The very first food packaging came from Heinz—they were pickling tomatoes, making horseradish, and experimenting with putting food in cans and jars. Somehow, they convinced folks to accept packaging and advertising—and we really received the message. They excelled at convincing people they needed something that they couldn’t live without it. And in fact, we came to not only trust it, but to think it was better and more desirable.

We’ve gone so far away from the source of our food. There was a time when we knew our farmers and where our food came from. But we’ve been greatly urbanized. By the time I became a cookbook author, I began working in an urban pre-school, planting vegetables so the children could see where their food comes from. I once asked them where they thought pizza came from and they said it came from a telephone—because that’s how they got pizza, from a delivery service. So I took them on a little field trip to a working farm called the Pizza Farm—it had an herb garden with oregano and thyme, they grew wheat and had a cow. Then we made a pizza together. That kind of literacy is essential.

CE: How do we undo this? How do we rewire people to learn the basics about food?

MK: The very basic act of cooking is becoming a radical necessity. That’s why I wrote Get Cooking, because people asked me to lay out the simple basics of how to cook. I wanted to give people the tools they need to make easy recipes, four to five things you can cook well. It sounds simple, but that’s the key to people digging their way out of bad food. They need to know how to shop and how to make food in their busy day and in a small kitchen. I wish cooking was required in school, but until then, we’ve got to teach simple lessons.

CE: You’ve got a fantastic companion Web site to Get Cooking and you’re now on Twitter. How has social media changed the game for you?

MK: I wanted to keep the book small and inexpensive, but I also wanted to provide videos online to allow for interactivity. So, on my own behalf, and with the backing of Kashi, I put together the Web site Get Cooking for the YouTube generation. I wanted to provide the basics: how to shop for a melon (look for “Melon Knowledge”) or what knives you should buy (look for “Knives”) and how to cook basics like stirfry, polenta, and pilaf. The videos are free and accessible to everyone.

I promised my publisher I would engage in social media and I’ve found Twitter to be more in the moment and vital than Facebook. I try and follow people who I believe are doing good work. I’m strict with what I tweet. I try to use it to be useful and retweet information I find important, or as a means to exposing people and ideas which I think need more exposure. On occasion, I might tweet what I’m cooking or I might describe what I’m eating if I think it might be of interest. But, I also take time off from Twitter.

CE: People seem surprised to find out you’re not a vegetarian.

I’ve never said I was a vegetarian, or that anyone else should be one. What I have said is, here are some ways that you can go meatless if you want to. I’ve said, here is my cuisine—it doesn’t include meat. And somehow, it’s been interpreted by some that I am a leader of a movement, which I never saw myself as. I will always eat vegetables and grain. I’m a vegetablist, a pro-vegetable person. But, I’m very tired of people who define themselves by what they don’t eat. For some, being vegetarian is more about the absence of meat and not about the presence of vegetables. I know plenty of vegetarians who don’t eat vegetables. I’m more interested in getting people to eat healthy food. I want to know: “What’s your attitude towards food, do you cook your own food, do you like it?”

Recently, Newsweek wrote a piece about lapsed vegetarians and even though I’m quoted, I was never interviewed for the story, which created a lot of misinformation. As a result, I received a lot of angry letters from a lot people. I wrote this rebuttal, which was not printed:

I feel a bit misrepresented by this article, which seems to draw a line in the sand with “animal eaters” on one side and “leaf eaters” on the other. I have always seen healthy eating as a continuum, not a dichotomy (and certainly not a game of “which side are you on”). I have never been dogmatic against meat-eating. Rather, my goal has always been, and continues to be, to inspire everyone (including meat-averse vegetarians, some of whom often find themselves eating fewer actual vegetables than one would think) eating greener—more of what I like to call “garden- and orchard-based” foods. My ideal Wonderful World would have everyone loving (and able to access) abundant, delicious dishes made from leafy greens, earthy grains ,and tasty nuts and legumes—and to have these items dominate every dinner plate. As you’ve mentioned, I included a few meat recipes in my most recent book, as I have many readers (old and especially new) who are beginners and omnivorous and want to learn to cook the things they love to eat. I’m hoping that meat-lovers (and also occasional meat nibblers, such as myself) will gain enough knowledge to know how to source it sustainably, and to learn how to eat less of it. Thus empowered, everyone will be able to happily avoid supporting the highly destructive fast food industry and factory farming of animals. If this sounds contradictory, let’s all talk about it more. It’s a discussion worth having–a big-tent conversation toward our common goal of sustainability, regardless of our food choices and tastes. Cook on!

My point is that everybody needs to work together to create a food supply that’s as sustainable as possible. Whether you like meat or not, everybody needs to fight against industrial food production. All meat eaters need to eat less meat and to eat more of a plant-based diet. We forget we can sit down at the same table and do this together. That’s why I’m involved in the Meatless Monday campaign; I want to make sure that people have plenty of choices low on the food chain.

CE: What advice do you have for someone who wants to get started in food now?

MK: Get over the food celebrity and cooking-on-TV-as-entertainment. Don’t try to be famous; learn how to cook and you will always have a job, because people will always need to eat. The gap between celebrity and real food being cooked is huge. People are watching TV, but there’s so few people cooking good, honest food. That is the stuff of daily life. If you know how to cook you’ve got a skill. Long after the TV’s off, you’re still going to need to eat. Go to the other end of the spectrum and become a skilled cook. Learn how to cook in volume, learn how to make soup for 80 people, a vegetarian casserole for 100 people. Develop a trade that enables you to go into an institutional place—schools and hospitals—and make food in the trenches. Become an activist so that food cooking is as respectable as it possibly can be.