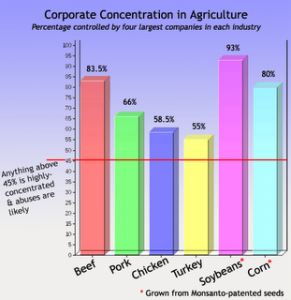 The first of the much anticipated agricultural competition workshops began last Friday in Iowa. Hosted jointly by the USDA and the Department of Justice, the workshops aim to explore the question of consolidation in agribusiness. The workshops themselves have already come under scrutiny for initially excluding actual farmers on the panels–and have come in for continued criticism that the farmers who have been put on are more representatives of corporations than real farmers.

It’s hard not to be somewhat cynical about our government’s claim that they’re shocked, shocked to discover there’s anti-competitive behavior in agriculture. On the other hand, for the last twenty or so years, consolidation has been–in Washington at least–the crime that dare not speak its name. So the fact that it’s the USDA and DOJ running these workshops is nothing short of astonishing.

And while the whole of the industry will get attention, much of the focus so far has been on Monsanto, which thanks to its aggressive practices–along with support from the USDA–now controls up to 90% of the seed business in some markets. It’s to the point that in many parts of the country non-Monsanto (and thus non genetically engineered seed) are simply unavailable to farmers.

The Justice Department is already investigating the company and it will undoubtedly get a lot of attention during these workshops. But knowing the Obama administration’s support for biotechnology generally and reading between the lines in this NY Times article on the issues involved with Monsanto, I’m starting to get concerned.

Monsanto sells its own branded seed varieties, like Dekalb in corn and Asgrow in soybeans, to farmers. But it has expanded its influence and profits by licensing those traits to hundreds of small seed companies, allowing them to incorporate the traits in the seeds they sell. It has also granted licenses to the other large trait developers, allowing them to create combinations of engineered traits in a process known as stacking.

Monsanto says that its licensing shows it is the opposite of a monopolist, encouraging rather than hampering competition.

But critics say the licenses give Monsanto excessive control. Seed company executives said the licenses were sometimes worded in a way that compelled them to sell Monsanto traits over those of its competitors. Mr. Quarles denied that, saying the contracts contain sales incentives typical of the industry.

The rest of the article focuses on the legal battles between Monsanto and Dupont, another biotech giant, over access to Monsanto’s patents. It may very well be that the anti-competitive behavior the government punishes is that which prevents even greater adoption of biotech seeds — the opposite of what many progressives want out of anti-trust enforcement.

Until we can displace agricultural productivity as the only measure of success of government policy, even this new attention to anti-competitive practices is unlikely to lead to meaningful reform. To me the focus must be on finding ways to increase farmers’ share of consumers’ spending without threatening significant increases in food prices — there is, after all, no government that likes to champion policies that increase the cost of food. Nothing puts a damper on electoral prospects like bread riots.

Keep in mind that a mere 7 cents of the consumer’s food dollar gets to the farmer, while 73 cents goes to distribution costs. The only way we can get to a win-win — and not be forced to choose between higher farmer income or higher retail prices — is to let the middleman, i.e. the processors and yes, the retailers — take the hit. Sadly, I don’t think Walmart, Safeway or Whole Foods are on the agenda at the moment, even though some experts believe the real squeeze on farmers comes from them.

It’s when we start having discussions like that and start recognizing that a relentless focus on agricultural production simply is not consistent with helping rural economies that I’ll believe we might just be getting somewhere.

Originally published at Beyond Green