Considering The T-Bone: How Does Local Meat End Up On Local Plates? | Civil Eats

Considering The T-Bone: How Does Local Meat End Up On Local Plates? 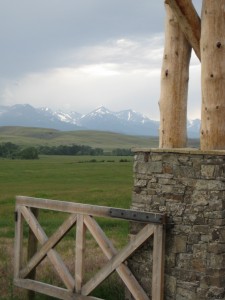 As supporters of sustainable food production, many of us know that finding an alternative to the industrial meat supply chain is difficult but by no means impossible.  For the typical sustainable meat buyer, when one thinks of local meat, he most likely pictures a ranch, and then a steak or pork chop.  Unless he is willing to do the work of slaughtering and processing the animal himself, his access to a local abattoir is as difficult to find as local beer without the brewery. This is the marketplace reality that many small-scale ranchers face today.

As the daughter of a former butcher, I recently asked myself how we got ourselves to large-scale meat processing and what our alternatives are.

Giant feedlots that truck thousands of cattle to large-scale processing facilities have not always been the favored manner of putting steaks on plates in the U.S. Rapid consolidation in the U.S. meatpacking industry, starting in the late 1970s, greatly impacted the way meat began to be produced, packaged, sold and consumed in the U.S. Earlier, in the 1950s, 60s and 70s, there were many independently owned and operated meatpacking plants that catered to local customers within a few hundred miles of their facilities. My parents operated one such plant just outside of Eugene, OR from 1980-86. They slaughtered about 100 head of sheep and cattle per week (primarily animals raised on our ranch) and sold the meat to restaurants and hotels in Oregon and Washington.  Meatpacking plants of this size were an integral link in the meat production and consumption chain because they offered ranchers and livestock producers a variety of locations to process their animals. Ranchers, for the most part, were a link in the supply chain that remained independent of the meatpacking plant (which slaughters and processes the animal into “primal cuts”, or “halves” and “quarters”). From there, wholesalers, retailers or butchers could further process the meat into “retail cuts” (the steaks, lamb chops, sausages and bacon) and then sell it to consumers.

So what drove industry consolidation?  Several factors influenced the movement towards larger facilities, but the three most important factors were economies of scale, aggressive price competition by low-cost meatpackers and slow demand growth for beef, which limited the number of large plants and furthered concentrated production into the hands of a few players.

Larger plants started to dominate the industry because they could process more meat at a lower cost than smaller plants, due to the use of specialized equipment and the type of labor favored by larger plants. In 1978 there were 6,135 [PDF] federally and non-federally inspected plants operating in the U.S.  By 2006, there were 2,893 [PDF] federally and non-federally inspected plants, or roughly half the number of those operating in the late 1970s.  These few plants competed aggressively on price, driving any plant with a higher cost of production out of business. Consolidations, mergers and acquisitions, in the face of declining demand for beef, bring us to today. There are four top firms that process almost 84 percent [PDF] of the cattle in the country.

We’re seeing a rapid climb: in 1977 the top four firms processed only 25 percent of cattle. By 1992—only fifteen years later—this measurement of industry consolidation had soared to 71 percent [PDF]. While this trend is not unique to the meatpacking industry, as many sectors of U.S. agriculture have consolidated and become more specialized in recent years, consolidation and vertical integration in the meatpacking industry is correlated with feedlots that have a capacity of over 100,000 animals [PDF]. To get a sense of the environmental impact of so many animals in one place, multiply 100,000 by 3 tons [PDF], which is the average amount of manure produced raising a 550 pound feeder calf to a market weight of about 1,150 pounds. Whereas consolidation in other agricultural industries does not always have as strong of an environmental or public health impact, food safety outbreaks associated with meat are increasing.

So, if you still want to consume meat but are opposed to large-scale, industrial meat production, what are your options? For an average American who eats over 200 pounds [PDF] of meat, poultry and fish per year, the solution lies in decreased consumption and an increase in local, sustainable meat production. The latter component requires an increase in local, sustainable processing capacity. Currently, many small ranchers have to drive increasingly long distances to find a meatpacking plant willing to slaughter and process their animals.  Since small-scale meatpacking plants are critical to the success of a local meat supply chain, we have to consider how to increase the number of small scale plants.

One of the most promising ideas is a mobile slaughter unit. These units meet a number of the unique needs of small-scale processing: They are nimble (one mobile slaughter unit can often process different species of animals), transportable, low-cost and highly efficient. The USDA has been supporting the use of mobile processing units through the “Know Your Farmer, Know Your Food” initiative and it has hosted two outreach webinars on the topic this past January.  Mobile processing units bring the meatpacking plant to the rancher.  This means lower costs (think travel time and diesel) for the rancher, less stress for the animals, a more efficient use of resources, and truly “local” steaks and burgers for all.  To find out more about mobile processing units, visit the Niche Meat Processor Assistance Network, or search for locally produced meat on EatWild or Local Harvest.