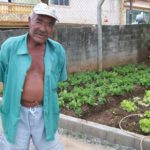 March 1, 2010: Sao Paulo. Some call it the New York of the Southern Hemisphere. A sprawling megalopolis of nearly 20 million people known as one of the most dangerous cities in the world and the best example of Brazil’s tragically large gap between rich and poor. With these tidbits conglomerated together into wary expectations, I sat tensely as we idled in standstill traffic en route into the city. Sao Paulo’s skyscrapers, its sagging favelas, its ugliness—every instinct told me to do an about face and head back to Rio’s inviting beauty. But for just one week, I told myself, I can stand almost anything.

Sao Paulo is an incredibly important city here in Brazil. As the commercial hub of the country’s booming economy, Sampa, as the locals call it, has become the destination for waves of internal immigrants. Those fleeing rural poverty and displacement in search of better lives have settled on the outskirts of the city by the millions, arriving faster than the city’s infrastructure can manage. As a result of this rapid growth, the city feels as though it is continuously oozing out from its posh central neighborhoods towards its third-world dilapidated communities. The favelas funnel labor into the city center to keep the urban gears oiled and industry booming.

Looking for some sense of context and connection, I had arranged to meet with representatives of Slow Food Sao Paulo the morning alter arriving. After a leisurely morning breakfast in the Parque Agua Branca—a park steeped in agricultural history and now the home of one of the city’s oldest organic farmers markets—I hopped into the car of one of my hosts and we set out to see the “other” Sao Paulo.

After winding our way through the choking traffic for over an hour, we finally arrived to pick up our tourguide for the day, Hans Dieter Temp. Hans is the founder and administrador of Cidades Sem Fome (Cities Without Hunger), an NGO that seeks to create jobs and improve nutrition in impoverished communities through small- and medium-scale agriculture projects. Together, we drove deep into Zone Leste, the eastern part of Sao Paulo, notorious for its crime and poverty. First stop, an urban farmstand. I had struck gold.

Within minutes of meeting Hans, I knew I had found a kindred spirit. Our methodologies and our philosophies jived so well and so immediately, it was like I was talking through a mirror. Since 2004—the organization’s official start—Hans and community members have built 21 urban gardens and farms and have helped to set up dozens of farmstands. All practices completely organic with very little mechanical assistance. Gardeners from the community train one another to minimize the need for top-down assistance, which serves to both build community capacity and to minimize the need for paid staff. Gardeners harvest and sell their produce locally, some directly across the street from the gardens, some a few miles away (as the larger sites and greenhouses are located on the very edge of Sao Paulo proper). All produce is priced at a rate that favela residents can afford, and gardeners make a good living wage from hawking their produce. Ripple effects? Empowering women, improving childhood nutrition, job-training, carbon sequestration (Sao Paulo struggles with horrific air pollution, and sustainable agriculture practices help to remove carbon from the air and carbon to the soil), improved community cohesion, etc. etc. etc. The list goes on and on. These are the reasons why I work in urban agriculture, and at Cidades Sem Fome, all the pieces are so finely tuned, so perfectly executed, that these types of social projects are obviously worthwhile. If only we could get all of our U.S. leaders down here to see, our public health, urban planning, nutrition and agriculture strategies might look very different.

As we passed the afternoon, I began to reflect on my experience in Rio. For every dysfunction in the horta communitaria near Sata Teresa, Cidades Sem Fome has a successful model to demonstrate. And yet, Hans runs his organization with a light hand an indescribable humility. Despite his expert training (Hans grew up on a diversified farm in Matto Grosso do Sul and studied technical agronomy in Germany), part of Hans’s mission is to be needed as little as possible. He sees his role as administrative and supportive—fundraising, helping design new spaces and build necessary infrastructure for organizational purposes, and publicity. His role in the actual gardening is minimal, as community members take over quickly. After only five years in operation, Hans has over 600 gardeners working with him. The numbers have swelled fast, and he has no interest in slowing down. Although he wishes the press would give his project some attention, it’s because he’s desperate to attract more funding and land opportunities, not because he’s seeking glory or personal recognition. He loves agriculture and the communities in which he works, and for him, that seems to create a sense of well-being that I have witnessed in few non-profit activists.

As we sat in his kitchen sipping juice (Hans lives with his wife, young son, and father-in-law in one of the communities in which he works), Hans and I mulled over the possibility for an exchange program. He was excited about the prospect of traveling with his work, assisting organizations working to scale-up urban agriculture initiatives and also to learn from other model sites doing similar work using different techniques. He seems at once an eternal student and a wise teacher, completely willing to share his skills and knowledge to any interested party, but equally accepting of the fact that there is always more to learn.

After strong hugs and promises to make plans to work together, we rode back through Sao Paulo. As I stared out the window at the favelas stretched out before me, I was comforted to think that, even in a city that feels so hostile, there is always a teacher, a lesson, a friend to be found. As I’ve said again and again, agriculture is a universal language, one that breaks down barriers and deters ignorance and fear. This, I reminded myself, is why I am here.