Produce to the People: Collaborating for Food Access | Civil Eats 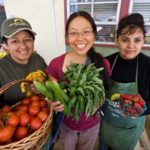 When it comes to local food, supply and demand aren’t always in sync. Many Bay Area shoppers still lack convenient access to affordable local food while many farmers struggle to expand their markets, even as awareness of the value of their products continues to grow. And while traditional farmers markets and CSAs are crucial to the success of many small farms, they ultimately account for a relatively small percentage of the total food that people buy.

How then can communities provide access to more fresh, healthy local food that is sustainably produced? How do we to create more demand (and a fair market) for farmers, while ensuring food security for people otherwise entirely dependent on the industrial food system? These were a few of the critical questions on the table at Produce for the People: New Ideas for Local Distribution, a panel co-hosted last week by CUESA and Kitchen Table Talks.

More people than expected turned out for this evening conversation and with a 138-person limit to the Port Commission Hearing Room at the Ferry Plaza Building in San Francisco, many people stood in the doorways to hear what was being said. Clearly, the conversation is an important one, worthy of further talks; and this one addressed the tip of the iceberg, addressing topics such as the history of this essential part of the food system, projects in the works, and suggestions for change.

The evening’s moderator, Roots of Change’s Michael Dimock, began with a definition of the challenge at hand. “The [food] system is incredibly concentrated,” he said. “That concentration has destroyed the system’s diversity and resilience.” Dimock briefly explained how problems arise with a concentration of production facilities, the increasing size of the average farm, and the concentration of distribution, retail outlets, and capital. One of the many consequences, he added, is a startling number of food deserts – or vast, under-resourced urban and rural areas where there is little or no fresh food available and the shocking reality that the people who grow our local food can rarely afford to buy it.

The city of Oakland has many such under-resourced neighborhoods. And while it may not solve this problem for the city as a whole, a recent project of the East Bay Asian Youth Center (EBAYC) and the Oakland Unified School District, called the Oakland Farms-to-Schools Network, is proving successful at getting more local, fresh produce to families.
Christine Cherdboonmuang (pictured) is the coordinator of the network, which is funded by the USDA and currently runs small produce markets on the grounds of 12 public schools. The school district provides storage and a centralized drop-off point for produce and manages the accounting. The markets provide a range of food, including local, organic, and conventional produce; they also set up near the end of the school day, allowing parents to shop when they pick up their children.

“What really hits home for families at our markets is the freshness,” Cherdboonmuang said. “And the connection to the memory of growing food, which a lot of families have.” Because they work in a largely immigrant community, she added, there’s demand for foods that don’t grow year-round in this climate, such as tomatoes, tomatillos, and hot peppers. “The challenge has been to address those cultural preferences, while working with local farmers,” she said.

Cherdboonmuang, who worked on food access issues for the Ecology Center’s Farm Fresh Choice Program prior to running the Farms-to School Network, hopes the project can become a model for other communities looking to infuse under-resourced neighborhoods with fresh food quickly with very low start-up costs. But it also touches on a deeper set of values. “A lot of this work is about getting back to an economy that is about our care for ourselves and for one another, not cash value.”

A Bounty of Ideas

Petaluma Bounty is another model of creative distribution; the Sonoma County-based nonprofit addresses food insecurity from a wide range of angles. Executive director Grayson James told the audience about the initial research phase of the organization’s development.

“I began by talking to all the folks in the emergency food network. It started to become clear to me that it was in pretty good shape – there’s a lot of food moving to a lot of people,” he said. “But I realized that we could multiply that by 10 or 20 times and, fundamentally, things wouldn’t be any different.”

This research led James to look at food security as a way to end hunger, “upstream of the food pantry line.” And, with an approach that sounds right out of a proverb, he and his staff have not only caught fish upstream, they’ve taught others how to do so as well. Petaluma Bounty runs an urban farm in the center of the city that produces a CSA, as well as a network of five community gardens. They offer produce they grow, and some they buy from area farmers, at a sliding scale; while some people pay retail prices, others (who can’t afford retail) pay wholesale. They also run Bounty Mobile Market, or what James calls, “a donated pickup truck that drives around to various locations” and a community food gleaning program (where volunteers provide the labor required to harvest food from gardens and area farms). And, if all that isn’t enough, the endeavor also includes a for-profit edible landscaping service.

Key to the project is a great deal of community involvement, and a philosophy that gets at the source of the lack of food access, rather than simply treating the symptom. Or, as James put it: “We shouldn’t be building more food pantries to solve our food crisis any more than we should be building more emergency rooms to solve our health care crisis.”

For Melanie Cheng, founder of FarmsReach, an online marketplace that connects farmers to restaurants and other institutional buyers, the key to increased distribution of local food is strategic collaboration. For a number of years Cheng’s focus has been on the larger challenge of engaging and supporting local farms online. She told the audience that, at a certain point, “it became very clear that one of their major problems was getting their stuff to market.”

Cheng and the staff of FarmsReach are building an infrastructure for institutional buying from local farms, and helping people on both sides of the equation determine fair market value. One aim, she adds, is to “collect data on what is being grown, so that it becomes easier over time to align that with demand.”

One way they’re doing this is through a new USDA/CDFA-funded project, which is a collaboration of 5 local sustainable ag organizations: the Brentwood Agricultural Land Trust (BALT), Community Alliance with Family Farmers (CAFF), FarmsReach, Great Valley Center and Marin Organic. It’s an exciting new project in that it follows new successful models of collaboration, including both alternative and conventional distribution partners.

“We have to re-create aggregation hubs in rural areas, so all these smaller and medium-sized farms can reach the mainstream,” she told the audience. In addition to new, alternative distribution systems, she believes it is crucial to “leverage the conventional people who are ready to step up.”

Distribution is complicated business with multiple networks operating various pieces of the web — from farmer to table. The evening’s panelists all work on part of that web, providing small fixes to a system that needs wider support from business leaders, policy makers, and concerned citizens before wide-scale access to local, sustainable food can become a reality.

For those of you who missed it, keep your eyes and ears open: CUESA is making an audio recording of the panel that will be available in the coming weeks and we hope to post it here on Civil Eats.