And The Oscar Goes To The Cove: A Film That Highlights Reckless Slaughter (VIDEO) | Civil Eats

And The Oscar Goes To The Cove: A Film That Highlights Reckless Slaughter (VIDEO) 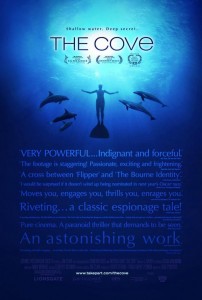 If it’s true that you can judge a nation by how it treats its most vulnerable members, then unfortunately for Japan, it may be no better than the U.S., when it comes to its treatment of animals. The Cove, a riveting documentary about the nation’s barbaric slaughter of dolphins, reveals the dark underbelly of a culture better known for its love of tradition, civility, and sushi. Now the Oscar winner for “Best Documentary,” The Cove beat out Food, Inc. (reviewed on Civil Eats), a contender for this year’s category as well. While Food, Inc. offers a sweeping panoramic view of America’s broken food system, bringing to light the detrimental costs of cheap food seen in our nation’s grocery stores, factory farms and cornfields, The Cove succeeds by expertly focusing on a single event in a remote Japanese village. Through the lens of former National Geographic photographer, Louie Psihoyos, we witness the annual slaughter of more than 20,000 dolphins in an isolated cove located in a national park in Taiji, Japan.

One of the great successes of Psihoyos’s film is its element of suspense, as the camera crew shadows renowned dolphin expert, Richard O’Barry, while he tries to gain entry into the well-guarded cove. The brisk cat and mouse drama is gripping, as O’Barry and his crew elude local police officers, petty bureaucrats and Japanese fishermen, who harass them as they move closer to the protected waters where the annual killings take place.

O’Barry became famous in the 1960s for capturing and training dolphins in the beloved TV show, Flipper. Airing from 1964 to 1967, the show became an instant classic and was likened to “an aquatic Lassie,” focusing on the clever hijinks of a bottlenose dolphin named Flipper. While the show introduced a generation of American children to the playful intelligence of dolphins, the untimely death of one of the five captured female dolphins, Kathy, led O’Barry to become an activist. O’Barry launched into a career to free dolphins from captivity, as the dolphin showcasing industry was just beginning to take off as an entertainment attraction.

In The Cove, O’Barry leads Psihoyos and his camera crew around Taiji, in a frantic race to expose the truth about dolphin abuse and capture it on film. He explains how the rise of SeaWorld, dolphin shows, and dolphin swim parks, have created an expensive niche market for the sale of these prized animals—selling for as much as $150,000 each. Taiji, Japan is ground zero for both the capture and slaughter of these beautiful mammals.

In the cover of darkness, O’Barry sneaks around the cove with the film crew, as they place hidden cameras in this secretive zone.  When all is said and done, these daring filmmakers capture the horrifying scene of Japanese fisherman impaling dolphins, turning the waters red with blood and filling the cove with the eerie cry of dolphins, desperate to escape death.  Ironically, Flipper, the show that exposed millions of Americans to one of the most intelligent mammals on the planet, has consequently been a source of their heartbreaking destruction. In a world where the ocean is marked with catastrophic decline, with the rate of decline accelerating, this senseless violence is beyond imagination.  Despite repeated efforts to stop the killing, Japanese fishermen defend their annual slaughter as a form of “pest control.” Ultimately, hiding under the thin veil of “scientific study,” the slaughter of dolphins is unlikely to receive significant attention from the Japanese.

Seafood is a staple of their diet and killing whales continues with official government sanction.  However, when O’Barry reveals that slaughtered dolphin meat is being served to local school children, the Japanese are stunned.

Endorsing the emblematic union of greed and official collusion, the local mayor has created a program where Taiji school children are forced to eat slaughtered dolphin meat. Considering that dolphin meat in Japan can contain as much as 5,000 times more mercury than allowable under Japanese law, the local mayor’s decision to feed this tainted meat to students is criminal.

For those left stunned by the senseless slaughter witnessed in The Cove—that this behavior continues to take place in the 21st century, that a civilized nation continues to allow it, that government officials are willing accomplices—there are more documentaries to learn from. The Cove’s American counterpart, Food, Inc., shines a bright spotlight on similar injustices in the food system found across America, where farmers, farm workers, consumers and rural citizens, are regularly ground under the heel of industrial agribusiness in its endless quest for profit. It is a remarkable statement that these two films were singled out by the Academy for potential awards. The success of these films depends on viewership,  dissemination of information and consequent change in policy. Their nominations–and one win–are also an indicator that the power of citizen engagement is only gaining steam.

Fortunately, for activists and concerned citizens around the globe, a new era of documentary exposure is dawning. While the violence in The Cove may prove too brutal for some to watch, this film serves as a reminder of the interconnectedness of our global actions and our individual responsibilities to stand up to injustice, on behalf of the helpless among us.

Watch the trailer for The Cove here: