Discovering the Pluot: A Review of The Perfect Fruit by Chip Brantley | Civil Eats

Discovering the Pluot: A Review of The Perfect Fruit by Chip Brantley 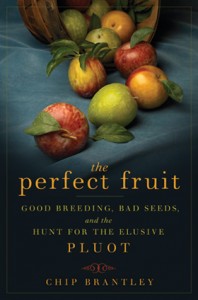 At a farmers market in Los Angeles, Chip Brantley bit into a plum-apricot hybrid, known as a “pluot,” and contrary to expectations found that it was not mealy or tasteless but remarkably sweet and juicy. As Brantley knows, lately consumers have been experiencing unmemorable plum-eating experiences. Why do the nicest looking plums often taste unremarkable?

In Brantley’s account, The Perfect Fruit, his fascination with the breeding and production of stone-fruits is told through a story about mad scientists and ambitious businessmen, leading him to the San Joaquin Valley to investigate the consumer and producer ends of the market. “The perfect fruit” implies that there is a better version of the fruit we now consume; the challenge to a breeder is to discover it and for the grower to introduce it to the consumer. Racing to create the next novelty taste for our commodity-driven market, breeders, growers and packers are infected with relentless, feverish competition. This rivalry and contest is the subject of Brantley’s look into stone-fruit breeding. In America, the story starts in the 20th century with the botanist, Luther Burbank (famously nicknamed “The Wizard of Santa Rose”), best known for the eponymous potato and the Santa Rosa plum.

“Viewing the work in retrospect,” wrote Burbank, “I assuredly have no cause to regret that is was undertaken, yet it has been the most laborious task.” There is such a thing as the “disease of fruit breeding.” It is a phrase used by the third generation fruit breeder, Floyd Zaiger, to describe his indefatigable obsession with inventing new stone-fruit hybrids, one of which is trademarked as the “pluot.” This hybrid took Zaiger nearly 20 years to achieve. “Bitten by the dreaded disease of fruit breeding,” the now 84 year-old Floyd Zaiger continues his experiments at Zaiger Genetics in the San Joaquin.

Through Brantley’s curiosity—his endless questions to key figures in the stone-fruit industry, his personal recordings of travels in California—we learn about seller and buyer relationships and stringent governmental policy.  His findings illuminate a commodity-driven market in which a breeder’s passion for invention clashes with a harsh demand: crops must sell.

In part, Brantley’s research is a personal narrative, but his account is also a precise explanation of the intricacies of the stone-fruit market. Simple explanations, such as his definition for price look-up codes (PLUs), help us to measure the size of the market: PLUs are “based mostly on color and size. Four colors—red, black, green and purple—have two codes each, one for large plums and one for small plums.” Gauging the size of the industry as a whole by learning important logistical classifications, one conjectures about the individuality of a breeder or grower: how does he distinguish himself in the marketplace? In a California valley loaded with crop production, output numbers are daunting.

In the San Joaquin Valley, pistachio production is valued at $275 million, carrots at $315 million and citrus at $450 million. Grapes are worth $600 million in sales and almonds weigh in at $500 million. But the pressures of the commodity-driven market do not come entirely from organizational methodology of the CTFA (California Tree Fruit Agreement) and other government-regulated standards. There is the supermarket to consider—a driving force behind a breeder’s quest for new varieties—a grower’s obsession with consistency of the product, a seller’s price per box, a buyer’s acceptance rate and the consumer’s buying preferences. While the CTFA works to promote the nutritional benefits of stone-fruit, the supermarket itself—by nature of display and pricing—plays a huge part in the repeat sale of produce.

In the summer of Brantley’s explorations (part four of his story), we reconsider why breeders and growers continue to strive for sales within a tumultuous buyer’s market: it boils down to guts, glory and competition. The stone-fruit market, as grower Ron Milton explains, is a “moving target”—preferences change all the time. Organizational control and government policy may stay relatively firm, but consumers’ tastes and expectations are fickle.

The “simple truth” about plums in the US is stated as Brantley’s honest opinion: “they often suck. Not always. Maybe not even most of the time. But often enough so that it feels risky to buy them.” Still, in the San Joaquin Valley, new kinds of stone-fruit with unimaginable tastes, shapes and textures, are quietly germinating, growing, blossoming and hybridizing. Through Brantley’s pursuit, we meet the great fruit breeders of this generation, and learn the history of the plum and the science behind stone-fruit breeding. As breeders turn select seeds into novel produce, they require not only dogged faith in their toils but a tremendous amount of luck.