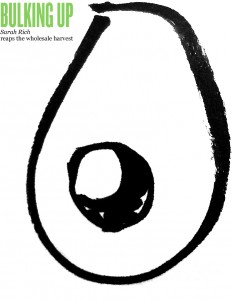 You may think you’re living frugally in San Francisco if you pillage derelict Yellow Pages for Rainbow Grocery coupons and pack your own lunch before work each day, but that kind of economy is for lightweights. You don’t know thrift until you’ve woken before dawn to shop at the city’s wholesale produce warehouses to cut the middle-man markup from your grocery bills. Even then, you haven’t sealed the real deals until the lettuce-slingers know you well enough to inquire about your family vacation and hug you when you leave with your car buckling under the weight of damp brown cardboard boxes. That’s when you know you’re getting rock-bottom prices.

If I weren’t trying to pinch pennies, I’d bet a lot of money that nobody in this city spends as little on food as my friend Valentina, while still managing to consume a diet consisting primarily of fresh, organic fruits and vegetables. Compared with her, I am a profligate shopper, easily caught shelling out cash for shiny apples at Whole Foods. But when recently I found myself challenged to cater a non-profit fundraiser on a shoestring, I knew exactly who to call. 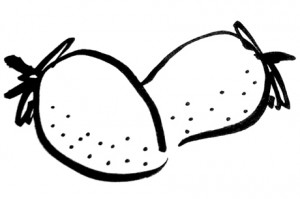 My alarm goes off at 6:30am and I stumble to my car in the dark and drive to the Bayview District—an area of the city that likely falls just below the Tenderloin on the list of spots to avoid when the sun is not up. But Valentina is undaunted—in fact, she lives in the Bayview, in a 7-person cooperative warehouse where she keeps all of her housemates fed for under $5 a day. She has been shopping at the wholesalers every Friday for years but this is my first time accompanying her. These are red-eye markets, opening some time around midnight and closing by 10am, so if you oversleep, you’re out of luck.

I pull up in the parking lot, which is surrounded by a high chain-link fence, and recall Valentina advising me that Earl’s is cash-only if you want to buy the deep discount stock. Outside the fence and across the street, an ATM blinks blankly at me as though asking whether I really want to pull cash from a machine on a deserted block in the dark. Fortunately, I spot a guard near the entrance to the bank and figure he’ll notice if anything suspicious arises. He sees me cross the street and ambles my way, casually standing watch. Cash in hand I race back over, climb the ramp to the Earl’s loading dock, and part the heavy clear plastic slats that hang down at the entrance.

Inside the chilly, 21,000-square-foot facility, I find Valentina chatting through the office window with the inventory manager about her recent trip to Chile. He’s calling her “Tina”—a nickname I’ve never heard a soul use in the 12 years I’ve known her. When I arrive we get down to business. Several days in advance, Valentina had asked me for a list of the vegetables I’d require so that she could provide unit costs for me to factor into my budget (something she assumed I’d created, naturally, and which I hadn’t, naturally). She emailed me a spreadsheet of standard offerings from Earl’s. Spreadsheets make my eyes cross. I decided to make game time decisions. 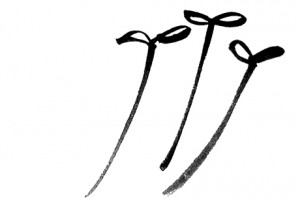 Valentina pulls out a handwritten list of her household’s weekly produce requirements and another list of the things I’d need. She begins her requests in the A’s, with alfalfa sprouts. “We have them,” Josh, the inventory manager, tell her. “It’s a case of six one-pounders.” Sprouts don’t last long. Valentina does not waste food. No alfalfa. “Sunflower?” she counters. No. “Pea sprouts?” They settle on pea sprouts. She works her way down the list to salad greens, which Josh regretfully informs us are in short supply this week due to rain damage over the previous three days. In recompense, he points out that organic mangoes are on special—a 10-count for $7.

All the while behind us, a patchwork of pallets in the middle of the floor has grown increasingly visible as the boxes towering on top disappear in the arms of deal-seeking grocers and restauranteurs. This is the island of major markdowns of which Valentina had spoken—organic produce on the verge of spoiling, priced to move. Dave, the master of the island, has a tougher demeanor than Josh. He’s ready for negotiations. Upon arrival, Valentina had set aside a small mountain of Dave’s goods—apples, carrots, lemons, portabellas—which, she informed me later, she was duty-bound to pay for once she’d laid claim. It was important to pull from that pile straightaway, she counseled, because it would vanish while we ordered everything else.

As we count bills to pay for our loot, Valentina spots a 45-pound box of avocados still sitting on a pallet. She ogles it like Carrie Bradshaw eyeing a pair of Manolos. Dave sees what she’s thinking. “You gotta kill all those in five days,” he says, “The bottom layer’s gotta be turned to guac as soon as you get home. The rest might last a few days in the fridge.” She takes it.

Josh loads everything onto a dolly and rolls it to Valentina’s VW Golf. We pile it in and put the excess in the cavernous trunk of my ’83 Mercedes. Josh goes to hug Valentina and I notice Jerry Garcia on the back of his sweatshirt, peering over round sunglasses. She tells him she’ll see him next week. 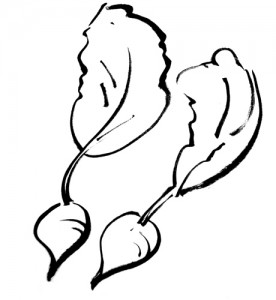 From Earl’s, we drive a quarter mile down the road to Stanley Produce. Stanley’s is not all organic but their presentation is nicer than Earl’s. A thoughtfully arranged wall of wooden display containers features radicchio, fennel, winter squash, and fresh herbs. Valentina tells me her 100% organic household doesn’t usually buy much from Stanley’s but that their wild mushrooms pass the pesticide test, and when chanterelles are in stock, there’s no cheaper place to find them. I think of the tiny bag of chanterelles I bought at Rainbow Grocery a few months back and the embarrassing amount of money I coughed up for them. I don’t confess.

The manager—a middle-aged guy in a heavy rubber apron—stands behind the counter while his crew moves goods around the platform. Valentina slips easily into Spanish, chatting with the employees, who seem to know her well. We run through the remaining items I need for my party, including endive, broccolini, and leeks. At Stanley’s, you don’t have to buy everything by the ton. I’m allowed to break a 25-pound case of red bell peppers and take just five pounds. The small bag looks almost like something a normal grocery shopper would buy, leaving me with a feeling of bulk-purchaser inadequacy. 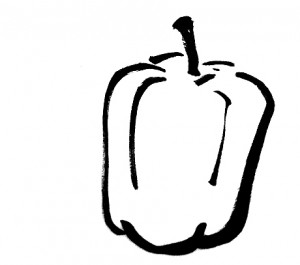 I depart having spent $48.45 on vegetables that will feed the 80 people who’ve RSVPed to our event. I enjoy a self-satisfied moment knowing my early morning dedication allowed me to pull this off for $0.61 per person.

With our cars loaded, Valentina and I drive back to her warehouse to unload. Her makeshift industrial-style kitchen features a border wall composed of a rotating array of cardboard boxes. We rebuild the wall with what we’ve brought home. She immediately breaks into the box of avocados, which I am certain she can hear calling out to her, begging her to mash them with cilantro and lime stat, lest they perish. It’s 8am. We eat avocado on toast for breakfast.

We’ve barely made a dent, but over the course of the week, the seven residents here, along with their significant others and lovers and friends, will make their way through all of this food. What they don’t finish, Valentina will juice or freeze or bake or zest. Not a seed or rind will be wasted.

For all this seeming scrimping, none of my friends’ homes have a greater sense of abundance than Valentina’s. Anyone who visits can partake of the supply and it’s not a burden on anybody’s wallet. It’s not easy to build such a land of plenty—Valentina has bulk food distributor codes cataloged in her head the way the rest of us once had telephone numbers before cell phones permitted our memories to atrophy. Eating both healthy and cheaply in San Francisco takes some work, but it’s worth the glimpse you get into the unseen world between the farm and the table, and the challenge of finding five hundred ways to eat beets.

Suddenly thirsting for five gallons of freshly squeezed orange juice? The Bayview is waiting for you. If you can drag yourself out of bed, places like Earl’s Organic and Stanley Produce will sell you all the produce you can handle. Forming a purchasing group of neighbors or friends—you can even call it a co-op—is a great way to share the assets as well as the savings.

Originally Published on The Bold Italic